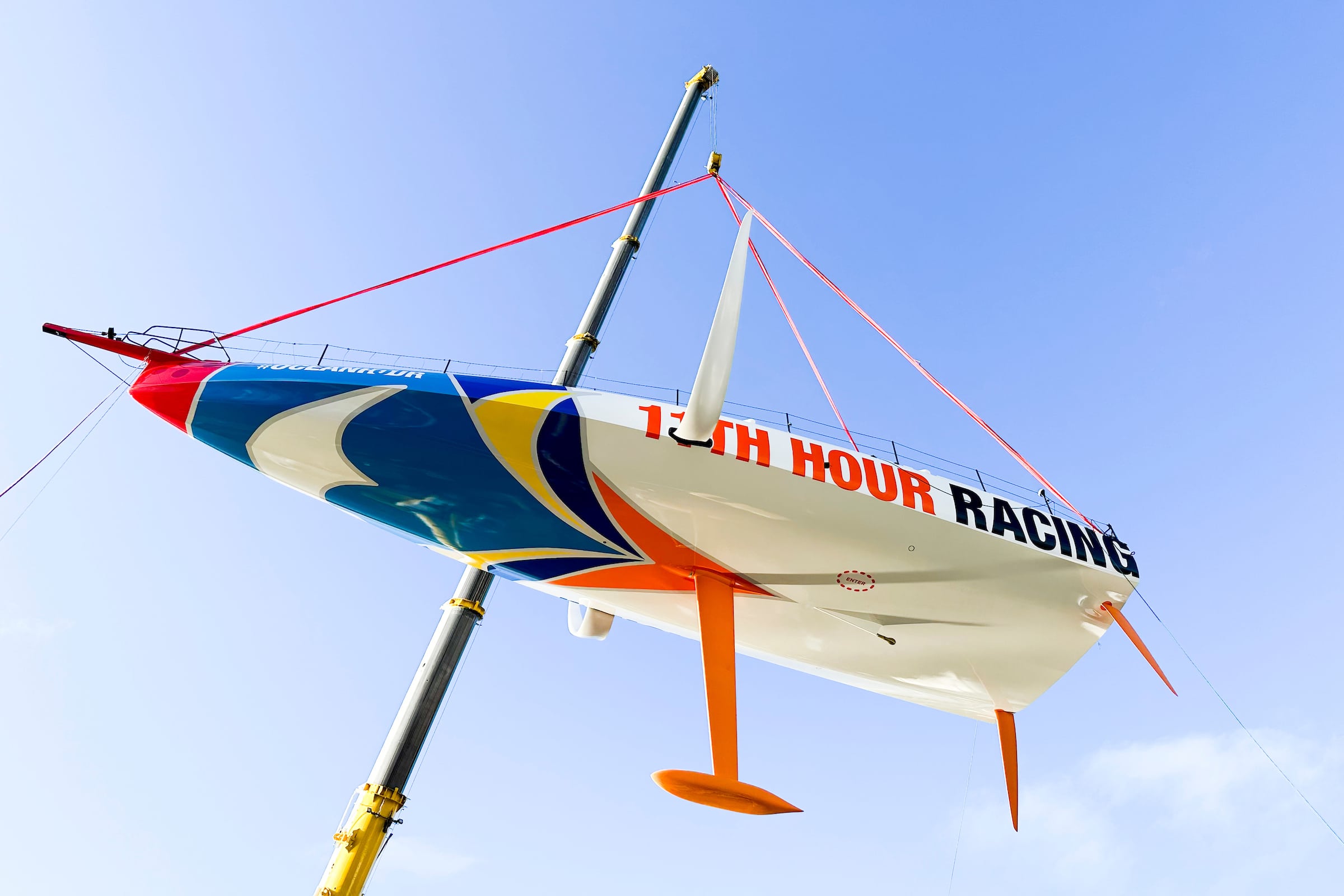 With two months to go until the start of the 31,700 nautical mile round-the-world adventure – The Ocean Race – 11th Hour Racing Team is in the final preparation stages ahead of the race start on January 15, 2023.

With the exception of two summers in Newport, Rhode Island, USA, the team has been predominantly based out of Concarneau in Brittany, France, since 2019 – a region internationally renowned for its offshore sailing facilities. Over the last two months, the team has participated in several elite and invaluable training sessions alongside other Ocean Race competitors at Le Pôle Finistèrre (Course Au Large) academy, as well as multi-day offshore training sessions to optimize the team’s performance.

After the completion of the most recent training session in October, the team’s 60-foot IMOCA, Mālama, was lifted out of the water and underwent its final refit, Class Measurement, and safety inspections before the start of the race.

The Class Measurement process is a strictly enforced and compulsory measurement process, managed by the IMOCA Class. To ensure safety in the upcoming Ocean Race, the Class has stipulated that all boats taking part in the race must be re-measured after the Route du Rhum and before the start of The Ocean Race – a process critical to not only ensuring an even playing field, but also the safety of the fleet. 11th Hour Racing Team is the first team to have undergone this to the satisfaction of the Class Measurer – the remaining boats will be measured after the Route Du Rhum – Destination Guadeloupe.

“Measurement is an important part of a race campaign, not only to ensure all the boats are Class compliant but also, and more importantly, that they are safe,” commented Team CEO, Mark Towill. “We have three brand new IMOCAs in The Ocean Race fleet, and, just like us a year ago when we launched Mālama, in the first few months after leaving the build shed a considerable amount of work is done to optimize a boat’s performance. It is good to see the IMOCA Class, the Class Measurer, and The Ocean Race all working closely together to ensure the proper protocols are met,” Towill concluded.

As additions and reinforcements are made to a boat freshly launched, new appendages are trialed, equipment is put on the boat, adjustments are made to the hull and deck, and the living areas are completed, the boat gains weight. The Class Measurers weigh the hull, the foils, and the mast, and the one design keel undergoes a thorough check.

In addition, the Measurers need to ensure that the boat can be self-righted, so they complete a 90-degree test, pulling the mast down to the water level to determine the center of gravity and ensure the boat can return upright, and also complete a computerized 180-degree test in the event of a capsize.

“When we are racing, each team is another’s safety network, particularly when in the Southern Ocean, as we are so far from land, we are reliant on each other in the event of an incident,” commented skipper, Charlie Enright. “Measuring all of the boats before the start of The Ocean Race is a critical process that demonstrates safety is at the forefront of decision-making by IMOCA and the race. It will give everyone peace of mind that the boats are safe to undertake a race of these epic proportions,” Enright concluded.

While the other IMOCAs in The Ocean Race are in the final stages of the Route du Rhum, for 11th Hour Racing Team the countdown to the start of the race continues, and this Friday, November 18, the team will leave Concarneau and set sail for a three-week training session in Cascais, Portugal, another location famous for its favorable winter offshore weather conditions.

“To have satisfactorily completed the measurement process and to have Mālama back in the water is a big moment for the team. It finally feels like the start line – which we have been working so hard towards for so many months – is finally within touching distance,” said Enright.

“Our team has sailed for over a year and racked up over 25,000 nautical miles of training onboard Mālama. The last few weeks back in the shed have allowed us to complete our final touches, and ensure that she is not only Class compliant, but also safe to undergo the rigors of The Ocean Race.

“Passing the measurement process and leaving Concarneau feels like the final hurdle in the preparation phase of our campaign. This is what we have been building up to since we launched our campaign in September 2019, and I can say with confidence we are showing up to the start line having done everything within our power to be strong competitors.

“Attention to detail is now crucial as we use the days we have left to iron out any creases, improve our onboard processes, and continue to optimize our performance,”  Enright concluded.

In mid-December, the team will sail Mālama from Cascais to Valencia, Spain, where it will be hauled out to undergo final checks before arriving on January 2, 2023, in Alicante, Spain, for the start of The Ocean Race 2022-23.