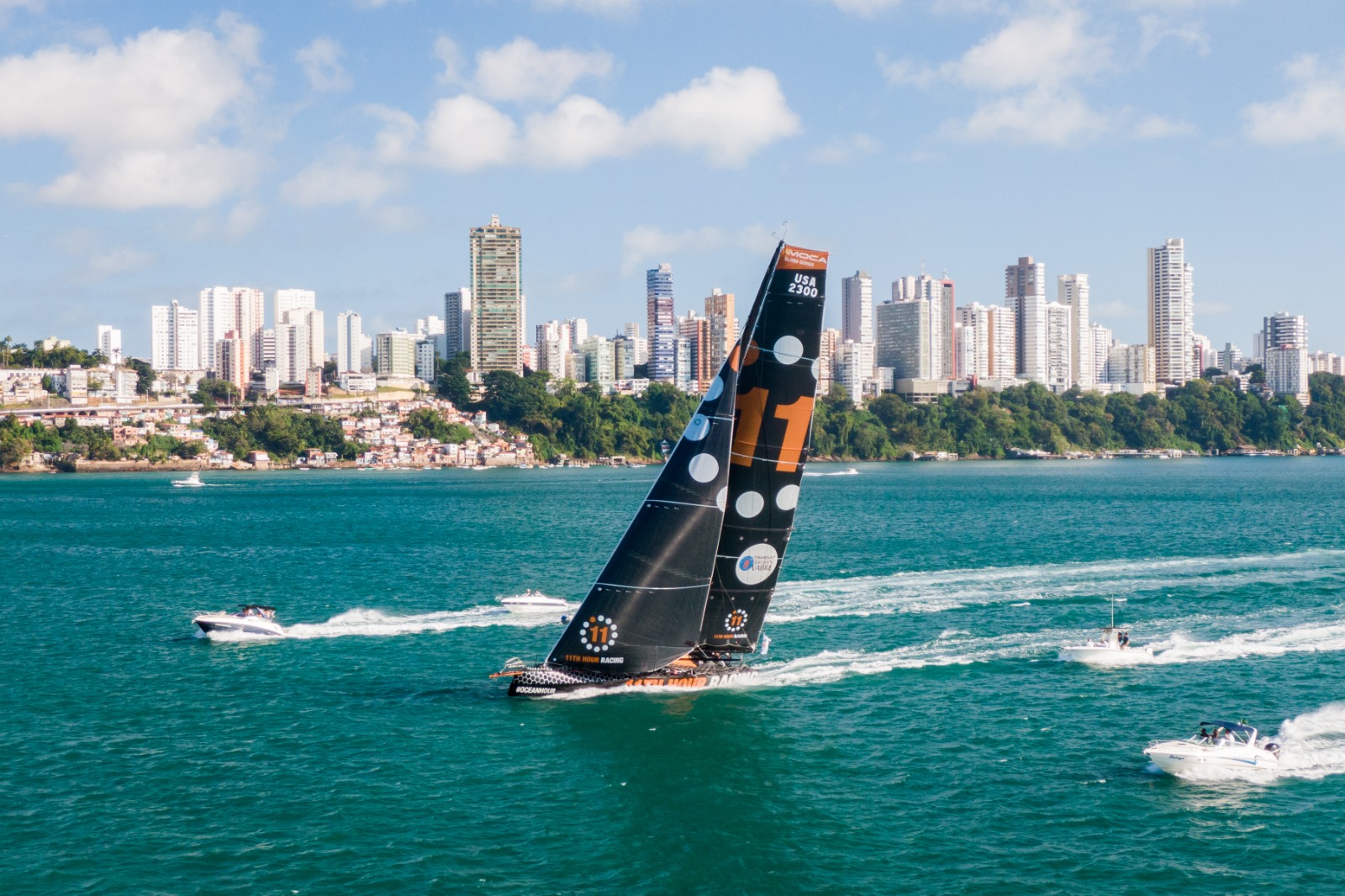 After 14 days, 6 hours, 10 minutes and 23 seconds of sailing, 11th Hour Racing, led by co-skippers Charlie Enright and Pascal Bidégorry, finished in 5th place Sunday to finish the 2019 Transat Jacques Vabre into Salvador de Bahia, Brazil. That original fifth place finish was then revised to fourth two days after the finish following a 2-hour penalty assessment against Advens for Cybersecurity by the international race jury for missing a rounding mark in the Bay of All Saints.

It was 11th Hour Racing Team’s first major offshore sailing event since the team was formally introduced in early September.

11th Hour Racing was among the top five in the IMOCA 60 standings for most of the Transat after departing Le Havre, France with 58 other boats on October 27. A pivotal split in the fleet happened early on with five of the 29 IMOCA class boats staying north and heading west into the Atlantic after exiting the English Channel. 11th Hour Racing turned south with a majority of the IMOCA fleet, staying closer to the French and Portuguese coastline.

Charlie and Pascal then pushed through some intense upwind sailing conditions as they headed south along the coast of West Africa and past the Cape Verde Islands. On November 5, the duo had perhaps their most challenging night of the race, losing a sail overboard before recovering it, hitting something with the boat’s keel, seeing a water spout and then dealing with an engine that overheated.

“[That] will go down as some of the craziest in my sailing lifetime,” said Charlie of that night. “We had a 24-hour blip on the radar. It was literally one thing after another. Probably kept us from being on the podium, but I think the way we dealt with it. It was pretty amazing… Finishing fifth [at the time] after all the adversity we faced, that’s a pretty big deal for me.”

Still they persevered and were in the hunt for a top three finish for much of the second week. After being assessed a 1.5 hour penalty by the race rules committee for inadvertently breaking the engine seal, Charlie and Pascal served the penalty on Wednesday before crossing the equator.

The penalty dropped 11th Hour Racing from third to fifth in the standings while they suspended racing to serve the penalty. The pair then made up some ground and was in third and fourth position for much of the final days of sailing. In the end, 11th Hour Racing — a first-generation foiling IMOCA —  just couldn’t make up ground on the faster, second-generation foilers and finished in fourth, 18 hours after winners Apivia and just over 2 hours behind Charal, a recently-launched boat that placed third.

“For me it was unbelievable to be racing against other boats that have 5 knots faster speed than you,” said Pascal. “That’s new for me. Ok, so Apivia was the clear and deserved winner, no question, but we know that several boats had faster boat speed than us, so we have to feel this [result] in our hearts, too.”

The top four finish was an impressive result for a team that has only been sailing together since this summer and bodes well for the longer-term vision of the 11th Hour Racing campaign to put together a team at the start line of The Ocean Race in 2021-2022 that will contend for The Ocean Race Trophy.

“You know, Charlie’s American, I’m French,” said Pascal with some reflection on the past two weeks. “We’ve only sailed together for a few months and sometimes the language was difficult — understanding each other isn’t always easy. But I think it was a good story for this race. We arrived together with a good finish and we sailed well with a good system.”

“It was an amazing race with some highs and lows,” added Mark Towill, who is the leader of 11th Hour Racing alongside Charlie, but didn’t sail in this two-handed race. “Charlie and Pascal had some great speed and made a lot of good tactical choices. Overall, we’re just really proud of the guys and fifth place is a great result for us in the first part of this campaign.”