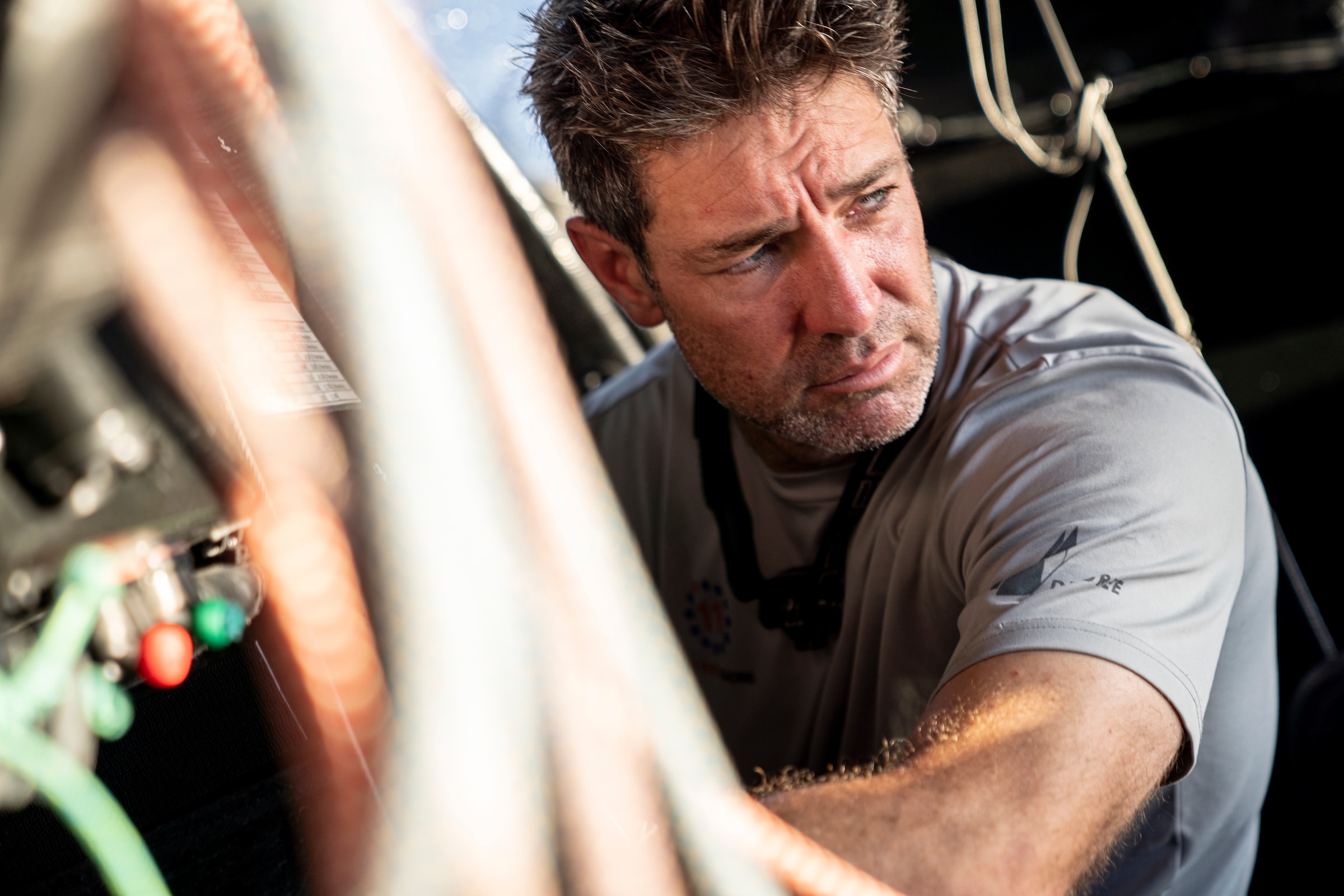 How a lawyer in training from Essex, UK, became one of the world’s most accomplished offshore navigators.

At 44 years old, Simon Fisher, known more commonly throughout the industry as ‘Si Fi’, is the most experienced sailor in this edition of The Ocean Race* and arguably one of the best navigators in the industry.

Over six feet tall with an unkempt beard and piercing blue eyes, Si Fi is probably one of the most recognized and well-liked sailors on the offshore sailing circuit. Not that this popularity would ever occur to him.

It might be easy to assume – given this will be his sixth around-the-world race – that he was always destined for a role in sailing, but this couldn’t be further from the truth. What most people don’t know is that this laid-back, amiable Englishman very nearly became a corporate lawyer in the City of London. An extraordinary contrast to the role of Navigator for 11th Hour Racing Team and his entire career.

Born in Chelmsford, Essex, UK, Si Fi was taken onboard his grandfather’s boat at just six weeks old. Coming from a family who loved sailing, it wasn’t long before he was pushing a cardboard box ‘sailboat’ around the living room as a toddler. 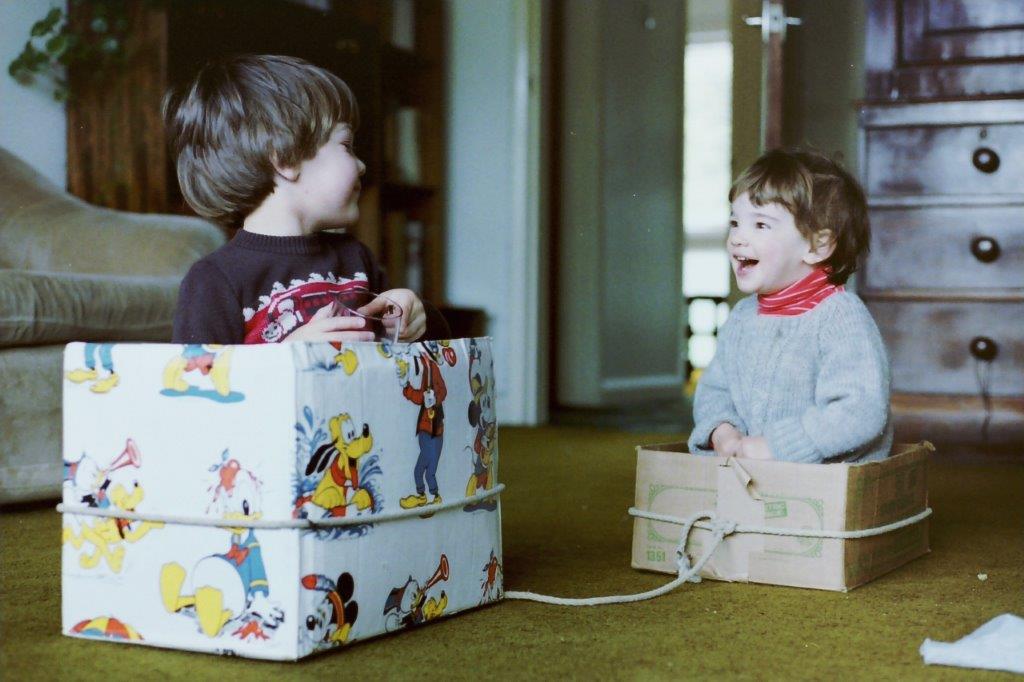 At six years old he had his first taste of racing in Burnham-on-Crouch, Essex, onboard small local boats. This hobby continued through to his early teens when The Ocean Race (known as the Whitbread Round the World Race at the time) caught his attention as a young teenager.

“Growing up I remember being fascinated by The Whitbread Race,” explains Si Fi. “I have this really distinct memory of watching the weekly shows on TV and seeing these teams sailing across oceans… I was sleeping in a bunk bed at the time and had the top bunk, but when I saw the Whitbread for the first time I immediately switched to the bottom bunk because I wanted to get the sensation of what it might be like to sleep on the boat. Now here I am 30 years later still sleeping in bunks!”

Regardless of how much he enjoyed his time on the water, his professional goals were traditional and linear: do well at school, get good grades, and choose a vocation.

The vocation of choice? A lawyer in the City of London, the financial hub of the UK, famous for its corporate skyscrapers.

“I know it seems a bit far-fetched telling you I was going to become a corporate lawyer, but it seemed like the correct choice for me at the time,” Si Fi explains. “I was going through school and feeling the need to do something vocational had chosen to study Chemistry and Law at university. I had lined up a legal training program in Guilford (a small, rather quaint British town) to do my solicitors qualification and my goal was to work in  London. Big job, big career, hopefully big money. I’m not sure whether it was a societal expectation, or perhaps just a lack of vision, but either way I was firmly on that path.”

After completing his degree and securing his place on the legal training program, Si Fi decided to take a year out. “I didn’t want to enter straight back into education once I had finished university. It’s quite common to do this in the UK and at the time I had every intention of returning.

“However I remember going to an open day with all these law firms and their representatives that I had a nagging  feeling that I might not fit in as well as I’d hoped.”

A recurring thought panicked him. What if he was about to spend his entire life working just to be able to afford to sail on the weekends? “I kept worrying I would be stuck in a skyscraper in central London staring out of the window, wondering ‘what if?’. I’m quite a practical person – not a daydreamer – and it occurred to me that there might be a chance I could do what I loved full-time and professionally.

“I thought the law could wait and eventually… Well, it’s safe to say that I never returned to my original plan.”

After working in the industry for a year, at the age of 23, Si Fi decided to aim big and applied for an internship on an America’s Cup campaign. “I messaged Ian Walker and begged him for a trial. I’m sure he must have thought, ‘who is this random, unqualified kid from Essex?’”

The campaign was GBR Challenge. “Ian giving me a chance on this campaign is how my career kick-started. He initially turned  me down, but I’m so glad I persisted. I said ‘look I don’t need anything, I just want to help’ and eventually he gave in.

“It wasn’t until I was onboard the GBR Challenge boat in Auckland racing in the Louis Vuitton Cup where the numbers on the sail alone were bigger than me, that I stopped to think about how different my life could have been.”

Five laps around the planet and plenty of stories to tell

Through a series of coincidences, Si Fi landed the role of navigator and decided to “get to know the job properly” by competing in the Whitbread – at this point known as the Volvo Ocean Race.

Dutch team sponsor ABN AMRO entered two boats in the 2005-06 edition of the race with one team being all under 30. “This was the perfect opportunity for me, although I’m amazed when I look back at this race how I didn’t know what I didn’t know. We made some pretty smart moves with the team, but knowing what I know now about strategy and weather I am sometimes I managed to do as well as I did.”

In the next edition of the race Si Fi was swiftly recruited to become the navigator for Telefonica Blue, under the watchful eye of the most experienced Ocean Race sailor of all time, Dutchman Bouwe Bekking. The team were doing well until they ran aground on a rock shortly after the start of Leg 9 in Marstrand in 2009. No blame was attributed, and Bekking called it a ‘charting problem’ to the media, but Si Fi was crestfallen and still calls it “one of the biggest mistakes of my career”. Upon reflection, he noted “This is where I saw the difference in attitude when it comes to choosing between looking for the next opportunity or dwelling on your existing situation. That team taught me a lot.”

Coming full circle, he then sailed for Ian Walker onboard Abu Dhabi Ocean Racing in 2011-12 and became Navigator for the team in the 2014-15 edition, winning the race 15years later with the very man who gave him his first big opportunity in the sport.

Si Fi sailed the 2017-18 edition of the race for Vestas 11th Hour Racing with Mark Towill and Charlie Enright, and is now embarking on another lap of the planet as Navigator for 11th Hour Racing Team.

If you’re objectively looking at Si Fi’s life and career you’ll see a man who is quietly competitive, driven to learn, and obsessed with the science and technology behind the sport of sailing.

“You can call me a nerd because I know it would be true – but if you could just add in the fact I hold my own in the gym I’d appreciate that,” he says laughing.

“It was recently pointed out to me that I am the most senior sailor in the IMOCA fleet for this edition of the race, and I had to take a moment to let that sink in. It feels like only yesterday I was starting out with ABN AMRO, excited by the chance to work with some of the most experienced in the sport. .

“It’s a massive accomplishment, but I would say my biggest accomplishment across the board is my family. I met my Spanish wife Maria on the race, and we have two beautiful children, Alexander and Ignacio. Because I live this life of often being away from home, I value the quality time that I have with them so much. Maria and I have been lucky enough to work on every Ocean Race, and this will be the first one she’s not doing – which will be really different for us as a family.”

So after five Ocean Race campaigns and enough miles sailed to take him to the moon and back, what makes 11th Hour Racing Team a standout campaign?

“We understand as a team that the world of sport is extremely influential. I’ve had the privilege to be a professional sailor for 20 years and it feels good to be giving something back, leading by example with regards to sustainability.

“What we do really well as a team, and what inspires me the most, is creating the momentum for change. It’s an admittance of the fact we know we’re not perfect as humans, and it’s the ambition of changing what we have the power to change.

“Our sustainability team monitors everything that we do, they examine how we can change for the better, and then share that information with the rest of the industry because then we can make a far more significant impact.

“The misperception around sustainability is that you have to be whiter than white with no margin for error otherwise it’s all a sham, and in my book that’s just not true. Like with all aspects of life, small steps evolve into huge changes. Also, in this team, I have seen the different challenges around this topic really inspire people to seek out solutions, and to influence change in areas that matter to them the most.

“So my advice would be, don’t stop what you love doing, just do it the right way.“

*In the IMOCA fleet, excluding Bouwe Bekking onboard the Volvo Ocean 65, Team JAJO.