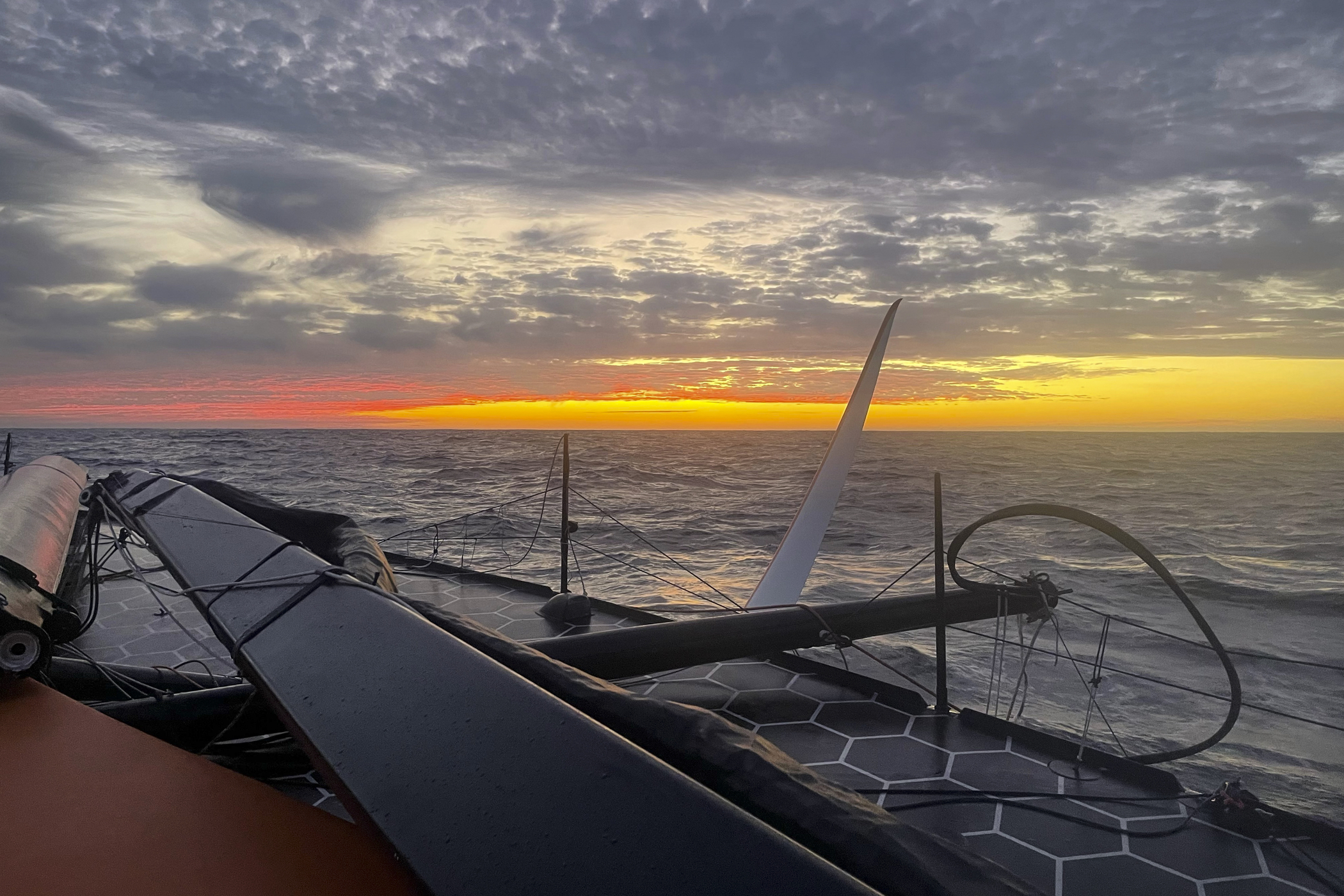 A bitterly disappointed Simon Fisher (GBR) and co-skipper Justine Mettraux (SUI) spent last night in a hotel in A Coruña, Spain, and not onboard their 60-foot race yacht, 11th Hour Racing Team Alaka’i, after being dismasted off the coast of A Coruña yesterday, Wednesday, November 10. The team were four days into the Transat Jacques Vabre, a 5,800 nautical mile race from Le Havre, France to Martinique, in the Caribbean.

At 14:02 UTC Fisher and Mettraux informed their shore team that the 95-foot mast had fallen down in 23 knots of wind [26 mph; 43 kph], and in a choppy sea state, as they raced in 7th place among the 22 IMOCA 60 boats competing in the race. Both sailors were unhurt in the incident and have abandoned the race.

Speaking from A Coruña, Mettraux said,

“Both Simon and I are really disappointed – we just didn’t imagine this would happen to us. We had a good start to the race, and were going well at the time. I am so sad to stop the race like this, especially as we have had such a good year racing together, the miles we have sailed and the experience we have gained. We are also gutted for the whole team who had helped us to prepare so well and got us to the startline last Sunday.”

The double-handed pairing were sailing downwind in 20-25 knots of breeze, about 7 nautical miles offshore from the Spanish city on day four of the transatlantic race. With one reef in the mainsail, and with the sailors under cover in the cockpit, the boat nose-dived into a large wave and the co-skippers heard a loud bang.

Fisher picks up the detail: “I heard a loud banging noise and I think it was fairly obvious from where we were sitting inside as to what had happened. We went up on deck and assessed the situation. The mast had gone down over the front of the boat and then as a result of that, the boat drifted over the top of the rig [mast] – we had a long battle ahead to try and get the rig back onboard. That was our first goal, our first aim – to be able to get [the mast] onboard and save as much of the mast, sails and rigging as we could.

“With it being washed under the boat it was impossible to pull out. We worked hard to get the boat to turn around, get the rig sticking out so that maybe we could pull it onboard more easily. But as we started to work on that and got the boat pointing upwind and the rig out from underneath the boat, the whole rig actually started sinking quite quickly.

“So we were unable to get the mast back on the boat – it was going to be too much for the two of us to pull it onboard. And at that stage we were starting to risk further damage to the hull and the foils. We had to make the difficult decision to cut everything away, but we saved as much as we could. We’ve hopefully minimized the damage to the boat and now we’re motoring towards A Coruña where we’ll be received by our good friend Chuny [Roberto ‘Chuny’ Bermúdez – a round the world sailor], who is going to help us tie up.”

11th Hour Racing Team’s shore crew travelled overnight from the team’s French base in Port-La-Forêt, Brittany, and met with the co-skippers this morning.

“This is obviously a huge disappointment for the sailors, and the wider team, however what is most important is that Simon and Justine are safely ashore,” said Team CEO Mark Towill. “We are undertaking a full assessment of the damage and are finalizing a plan to get the boat safely back to France,” he concluded.

“Simon and Justine are two of the very best offshore sailors and we are fully confident they made the right decision for the boat and themselves at the time. As we have seen twice now in this race [there was a previous dismasting on another team’s IMOCA during the first night], incidents do happen, and in highly pressured situations, the team has to make instinctive decisions taking into account human, economic and environmental implications.

“Clearly it is best for the environment that nothing is lost overboard. We will be taking the environmental aspects into account as part of our campaign footprint.”

The Transat Jacques Vabre is a biennial race from France, and for the first time in the 28 year history of the race, will finish in Martinique. 79 teams are taking part, including Fisher and Mettraux’s teammates – Charlie Enright and Pascal Bidégorry who are racing in the newly launched IMOCA – Mālama. As of 1500 UTC on Thursday November 11, they lie in 5th place overall with 4,825 nautical miles [5,553 miles; 8,936 km] to go.

The fleet is due to arrive at the finish in Fort-de-France, Martinique around 25 November.