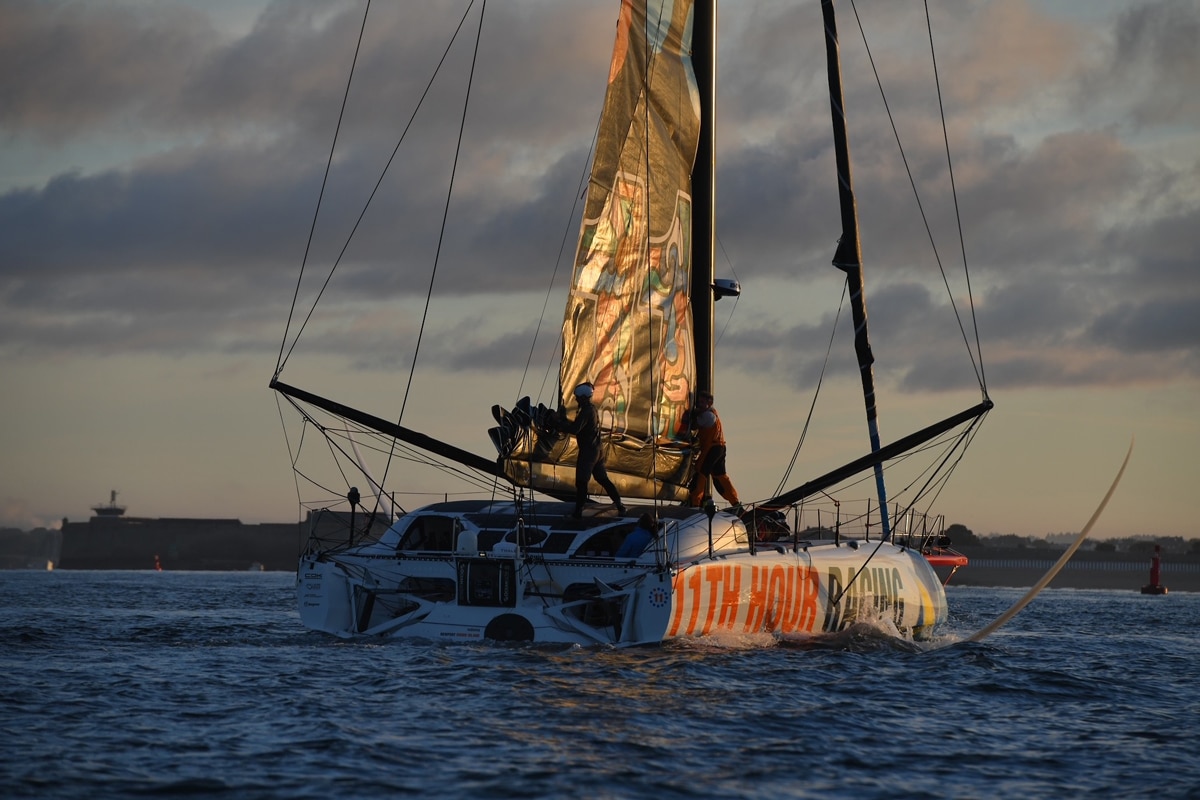 Yesterday, the 48-hour race started at Le Défi Azimut. After a night out in the Atlantic, our boat Alaka’i is currently in fifth place, while Mālama headed back to Lorient after tiller bar failure.

There was disappointment for skipper Charlie Enright this morning as he returned to Lorient, France, less than 18 hours into the 48-hour race of The Défi Azimut, after the tiller bar, which connects the head of the rudder to the tiller, was damaged.

Enright, with his co-skipper, Pascal Bidégorry fashioned a repair at sea which held, but with the upcoming weather conditions approaching the fleet – a ridge of over 25 knots – were cautious about the repair’s ability to hold and chose to abandon the race and return to Lorient to avoid any further damage to the new boat.

“We spent the better part of two hours trying to put the tiller bar back together and came up with a solution that held, but once we saw how the boat was reacting in five knots, it became pretty clear that there could be the potential of unnecessary further risk of damage to our new boat with the 25 knots we had coming at us.”

The Défi Azimut comes less than four weeks after the new IMOCA 60 rolled out of the build shed and the team has been undertaking a detailed commissioning process as they take over the boat from the builders and start to test the onboard systems.

The Défi Azimut is the first race for Mālama, and Enright had kept his expectations for their on-water performance in check.

“We knew there was risk associated with doing this race as we’ve only spent four full days at sea and last night was our first time overnight. We knew that the potential for damage was always there. We pushed to get the boat on the water but took advantage of the opportunity for us to discover more about the boat, to line up against our competition, and test the systems. It was a risk, but a calculated one, and our focus remains the same for this fall: the Transat Jacques Vabre.”

After repairing the tiller bar, the Team hope to re-join The Défi Azimut fleet on Sunday for the Tour de l’île de Groix.

At 0948 this morning, the second entry from 11th Hour Racing Team in The Défi Azimut – Alaka’i, co-skippered by Justine Mettraux and Simon Fisher – is currently sitting in fifth place as they head towards the first turning mark on the triangle course.

It was a pretty good night! A few little traps here and there and the wind was pretty light, but we’re still in a good shape and are going pretty well. At some point, we got caught up in some fishing gear and had to spin around to get that all off. Once we were free of that we were back on track, at a good pace. We got some solid speed up after the cold front, which was a tricky one. We knew it was going to get messy, but we didn’t think it would be that messy! It took us a little while to get fast after that, but now we’re on track and downwind for the next 10 hours or so.

The conditions at the moment are quite gusty with this post-front of north-westerlies, so our strategy will be to keep things simple. The forecast doesn’t look like things will get better, so we’re just trying to keep things fast, minimizing the jibs and not getting too close to the cold front to maintain a consistent course.