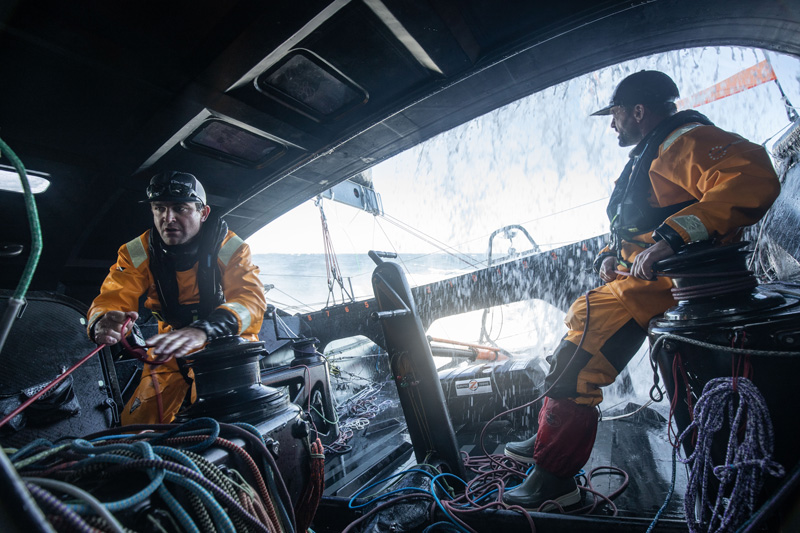 This past week marked the first official race for 11th Hour Racing Team in the Defi Azimut (Azimut Challenge) out of Lorient, France a city 40 miles south of where the team has been training for the Transat Jacques Vabre in Port-la-Forêt.

The competition was mixed amongst the 20-strong fleet, making it a great first test for the team to see how we rank amongst the IMOCA competition. Charal and Arkéa Paprec, the latest generation IMOCA 60s, took flight in 20 knots of wind. We also saw older generation boats fitted with new foils (MACFS and PRB) showcase a strong performance, while older IMOCAs sailed without any foils at all.

With Charlie Enright and Pascal Bidégorry as co-skippers, the challenge started on Wednesday, September 18, with a series of crewed, timed speed runs over a one and a half mile course between Ile de Groix and Pointe du Talud. 11th Hour Racing took their shot at the line for three runs. Their fastest time came in at 3 minutes and 20 seconds, putting the team sixth in the standings.

Thursday brought the ultimate challenge with a 48-hour, 500-nautical mile offshore race in a double-handed configuration. 11th Hour Racing Team had a fast downwind start in 20+ knots of wind and spent the first two-thirds of the race in second, just behind Charal with PRB chasing them in third. They made the decision early on to sail with the FRO for the entirety of the race.

“We knew it wasn’t the right sail for the start, but we wanted to minimize downtime with sail changes while racing, and knew it was the best option for the remaining 38 hours of the race,” said Charlie.

It was on the final homestretch where the team slipped to third after rounding the third and final mark with an upwind beat to the finish.

“The boat is traditionally not fast upwind, but there are still things we can do to make it better for the Transat Jacques Vabre,” said Charlie. “We’re still learning.” The team was able to hold off the rest of the foiling fleet to finish on the podium in third place.

Although an extremely wet and windy race for the double-handed duo, they were all smiles once they hit land, satisfied with the result of their first race. “If we have a finish like this in the Transat Jacques Vabre, I think we will be very happy once we reach Salvador,” said Pascal.

The boat is currently being hauled out in Lorient for the last time before the Transat Jacques Vabre. The shore crew will check items off the worklist before delivering the boat back up to Port-La-Forêt to participate in the last two IMOCA training camps. Come visit the team in the Le Havre race village from Friday, October 18 through Sunday, October 27 when they will set sail for Brazil.