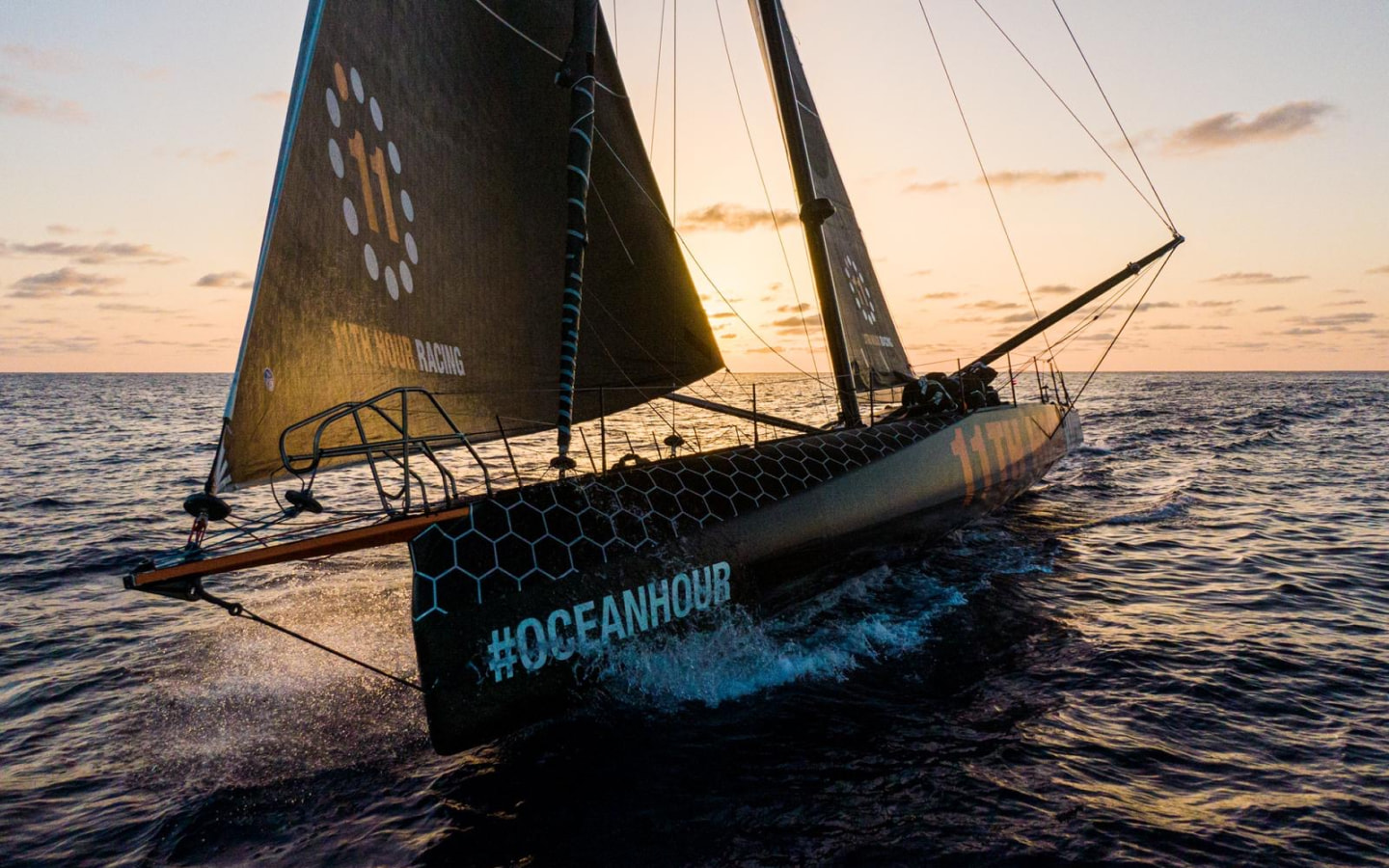 Onboard update from Amory Ross on day nine of 11th Hour Racing Team’s Atlantic crossing, as they pass over the Newfoundland Grand Banks.

This update coming to you from about 200 miles south of Newfoundland and 350 miles East of Halifax. I just watched the water temperature rise from 23.5c to 27c as we leave the incredible plateaus of the Newfoundland Grand Banks behind and return to deeper waters warm with Gulf Stream influence.

It has been a big day. We first dropped our weather buoy at the far western edge of our suggested target area, hoping to give it as much runway in the East-moving currents as possible. It was fun imagining that this small piece of equipment will be floating around out here giving meaningful information for years to come. I’ll be checking in!

Shortly after heaving it off the stern, conditions deteriorated. A sunny morning turned into a rainy, squally afternoon – common in this part of the Atlantic due to the rapid change in water temperatures between the deep Gulf Stream currents and the cold water shallows of Canada. This abrupt change in underwater landscape, a rather insanely complex labyrinth of canyons that rise from 4,000 meters under the surface to about 80 meters, is also what makes this patch of sea so alive with wildlife.

Staring at the charts it makes sense. Warm, nutrient-rich Gulf Stream currents from the south run into a sheer wall and rise to the surface where birds, whales, fish and dolphins at the surface feast away. It reminded me of a boat model I had as a kid, a gift from my Grandparents, of the famous Bluenose. The Bluenose was a fishing boat out of Newfoundland that would have fished this waters for decades. Back then, fastest to the fish and more importantly, fastest back to the dock, won the biggest prize. So the Canadian fishing fleet became some of the fastest sailboats in the world and in a lot of ways, were the first fleets to embrace offshore racing! The Bluenose was famous for its speed, so I took a moment to imagine how far sailboats had come since the schooners of the 1920s, at about the same time we picked up a few boats on AIS over the horizon.

Covid complications have had a positive tangible impact on this underwater ecosystem. The Grand Banks are big on Cod, Halibut and Swordfish, but lots of the fisheries are still closed. It is quiet out here… good news for the critically endangered North Atlantic Right whales who are frequently struck by ships, entangled in fishing nets, and impacted by noise and light pollution from the constant traffic. Good news for the fish stock, which is having a summer to rebound. Good news for the overall health of the sea. Obviously it is a tough time for the fishing industry but it is peaceful sailing through this stretch of ocean usually so full of activity and seeing so little. It feels more ‘balanced.’ At sundown the skies cleared as gannets and shearwaters surfed the waves. The last thing I saw before ducking down for dinner was a lone pilot whale bidding us farewell.

From here we skirt the northern edge of the Gulf Stream down the coast, careful not to step too far into it’s 3-4 knot northerly push. Winds look light, which will make the 800 or so miles to Newport take a sluggish week to cover. All that being said, nobody seems to be in any hurry. There are no regattas to get to, nothing really “next” on the calendar. It has been ages since any of us have been away sailing and the general gist onboard is that life out here is really good. We are lucky to be doing what we all love to do. At a time like this, nobody is taking that for granted.