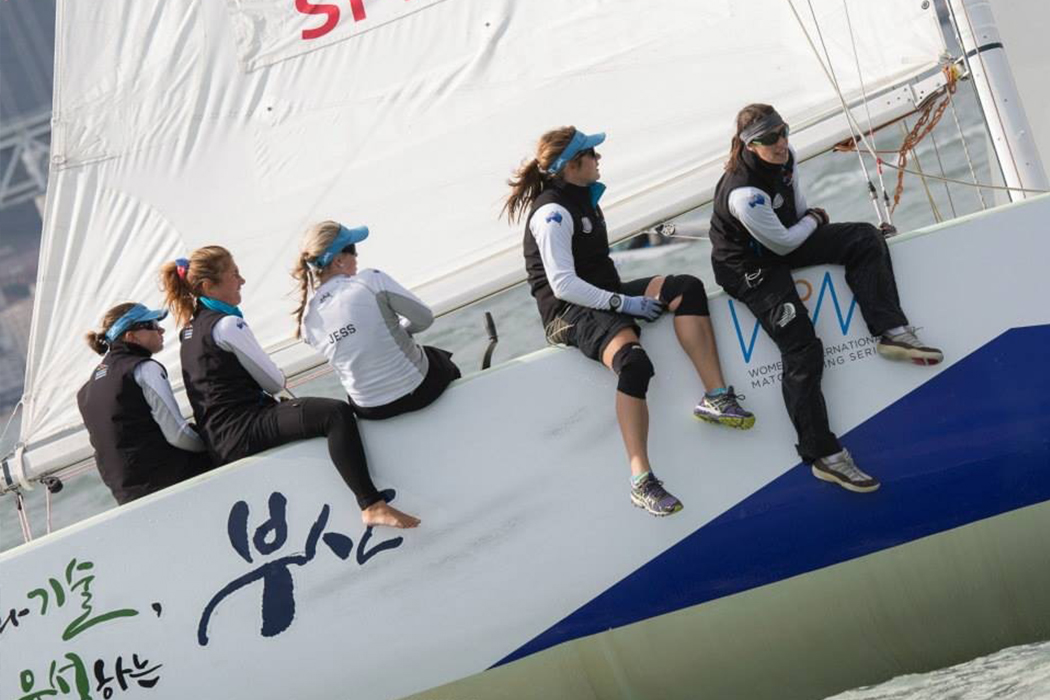 Serious sailor turned logistics queen, Aimee Famularo’s skills know no bounds. We catch up with her to find out what it’s like to be in charge of getting the team from A to B.

Q: You were a top sail racer yourself at one point, tell us about your competitive sailing background?

Aimee Famularo: I grew up on an island near Auckland called Waiheke Island and learned how to sail there. I had a school teacher who was an enthusiastic sailor and my Dad had a small trailer yacht for weekend adventures. Then I joined the Royal NZ Yacht Squadron’s Youth Training Program where we sailed every weekend throughout the year. It’s a place where some of the top Kiwi sailors have started their careers – guys like Adam Minoprio and Ryan Houston. It’s a great program to get young kids up through the keelboat ranks, and helped me launch into a competitive match racing career.

Q: When did you transition into the operations & logistics side of things?

AF: It’s difficult to find opportunities for professional sailing as a female. I did have a female match racing team for quite a while but soon realised it wasn’t going to pay my bills… I tried to get something lined up for The Ocean Race back in 2011-12 with a team but fell short in the end — but I was in Alicante for the start of the next race and jumped on with Team Vestas Wind just before the start, with a job mainly focused on logistics.

Q: Did you always know you’d want to work in sailing?

AF: It was definitely something I always wanted to do. It’s a challenging environment to break into. Sailing can be a small community and sometimes you need to get lucky. I actually trained as a Physiotherapist and did my Bachelor’s Degree along with a Master in Health Practice, working for almost a decade doing that in Auckland and some time in Bermuda before that first Ocean Race. Then I made the transition. The Ocean Race had always been on my radar.

Q: Tell us a bit about past campaigns you’ve worked on?

AF: The two Ocean Race campaigns that I have been part of previously have had a focus on sustainability, which is quite cool and inspiring to be part of. The first was with skipper Chris Nicholson (Team Vestas Wind) and the second with Mark and Charlie (Vestas 11th Hour Racing). Like most Ocean Race teams, both had logistical challenges – it wasn’t always smooth sailing to get all the way around the world. The biggest things that came out of those campaigns for me was the importance of teamwork and communicating with each other. Everyone has a role to play when you face adversity. For me, I really thrived working under pressure. Maybe that’s why I’ve ended up in this type of work [laugh].

Q: OK, so travel stories can be a bit boring sometimes, but what’s the craziest travel story that you have ever had to deal with? We won’t name any names!

AF: The incident in the Indian Ocean in 2014 with Team Vestas Wind reefing their boat was definitely pretty crazy, but because the boat was in the middle of nowhere, we couldn’t actually do that much on the travel side. There was really only one way to get them out and that was by another boat. Getting Mark and Charlie to Itajai in 2018 was another crazy travel story. They were in the Falklands after dismasting on Leg 6 and we got them on the only flight for the entire week with about 1 hour to spare, out of Stanley and eventually to Itajai where the next leg was starting. The poor guys got food poisoning, but they got to Brazil. Thanks to their efforts, along with a huge push from the shore team and sailors, they were able to get back into the race finishing on the podium on the leg from Brazil to Newport. That was a monumental effort by everyone involved!

Q: I imagine that COVID-19 has thrown a bit of a monkey wrench into everyone’s travel plans over the last year, no?

AF: The hardest thing at the moment with the pandemic is the unknown. We can set up scenario A, B, C, D but in the end, we just have to sit tight and wait to see how it all plays out. We’re spending a lot of time on government websites reading through the travel updates and guidelines. Many of the countries are actually pretty good at updating the restrictions, but they usually only post them the day that the new rules take effect so that makes planning tough.

Q: How do you balance travel requests with the fact that flying has quite a carbon footprint, and how do you interface with the sustainability team on this?

AF: For us it’s very much about careful tracking of travel to offset the carbon footprint. On my side, we closely track all the legs and mileage and that then auto-populates for the Sustainability Team. At any given time we can calculate the footprint. That includes more than just flights – driving to and from the team base, train and ferry travel, or even driving to the airport for travel. One thing about the pandemic is that at the moment, it’s all about essential travel only and that’s made everyone think: ‘how much do you need to travel?’. People have definitely changed their opinions over the last year.

AF: I don’t actually own a clothing dryer and I air dry all my clothes. I also take all my own fruit and veggie bags to the supermarket. Here in New Zealand, they have banned plastic check-out bags but not the vegetable bags, so I make sure to bring those along.

Q: So how do you deal with your wet clothes in Winter?

AF: Well, I’m lucky I have north facing windows in my apartment and I have plenty of air dry racks as well. They are a great investment and it will save you money AND conserve energy long term.

Q: What’s been your go-to activity while you’ve been home in New Zealand?

AF: I’ve been running a lot. It’s two minutes down to the water, so there’s a really nice run through my neighborhood, along the boardwalk and on the beach. Keeping active has been key.

Q: Since you’ve done the Ocean Race before, what are you most excited about for the next Ocean Race and is there a particular stopover you are most looking forward to?

AF: I think the excitement of being in the race village with all the people, the fans, the hype and the enthusiasm. It’s a fun and exciting environment to be part of and that’s what I most look forward to. Cape Town is always great. I kitesurf so I usually take some time after that stopover to go kitesurfing about 1 hour north of the city, and that makes it a special one for me.