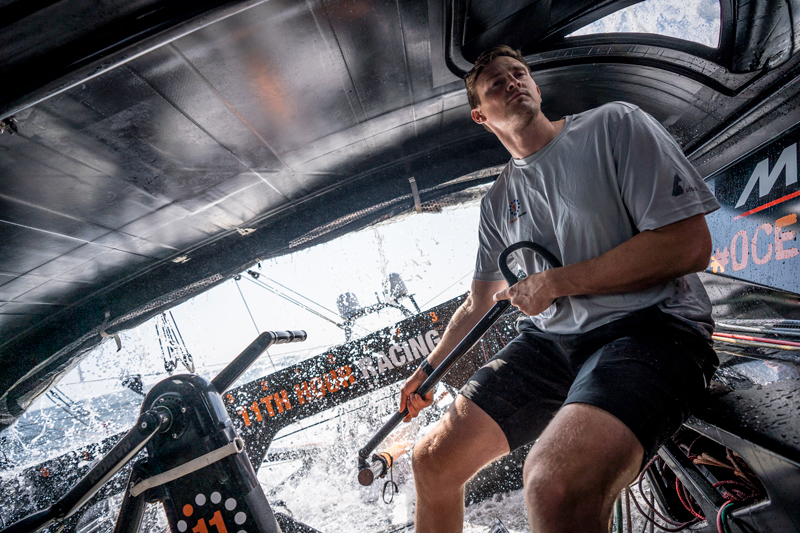 Kyle Langford may have said he was one and done with Southern Ocean Sailing after the completion of the last Ocean Race, but the accomplished America’s Cup sailor is back for more offshore racing having joined 11th Hour Racing Team for the next edition of the race.

Number of Years in Sail Racing:

Q. Kyle – this will be your second lap around the planet in The Ocean Race, what motivates you to come back to the Race?

Kyle Langford: I definitely feel like I have some unfinished business after the last race with Brunel: it was all a very new experience for me. This next edition of the race provides a massive challenge and attraction for me with the development class [IMOCA 60] that we’ll be competing in. It’s also such a great opportunity to join Mark, Charlie, SiFi and Rob as well as their experienced shore team – I’m really looking forward to it.

KL: The biggest eye opener was that it really was a lot harder than I expected, and I had expected it to be hard. It is just an exceptionally tough event. Now that I have one edition under my belt, I have a sense of what it will be like next time: the adverse situations, the fatigue, the lack of sleep, the challenges. I’ll know a bit more about what to expect. So compared to my first experience when I was constantly learning new things, I hope I can focus even more on actually sailing the boat and really pushing it.

Q: Did you have one leg or moment that stood out for you from the rest in 2017-18? You’ve said previously that you’d never do the race again after the Southern Ocean!

KL: There are so many moments that stand-out in The Ocean Race. And with the passing of time, you seem to forget the bad ones. I have said in interviews before that I don’t want to go down into the Southern Ocean again [laugh] …. that’s true but the feeling passes quickly and rounding Cape Horn as a sign of exiting the Southern Ocean is just a HUGE milestone and a really special one. I’m looking forward to getting to that point in the next race. It’s the most difficult place in the world for sailing and when you get past the Horn it’s a welcome sign and you head north from that point on.

Q: You obviously have an incredible track record of winning, where do you think that comes from?

KL: A lot of my success has been luck. I’ve been lucky to be surrounded by such good people and I think this team is no different. I’ll be really leaning on my teammates who have such a huge amount of experience, and the fact that I can join these guys and be part of the group will make me a better sailor. That’s the key.

Q: Talk a little about sailing in your family and growing up knowing that professional sailing was your calling?

KL: I grew up in Lake Macquarie, north of Sydney. It’s the perfect place for sailing as it’s a coastal lake. I would go after school as much as I could since I wasn’t too keen on school to be honest … I watched the America’s Cup in 2007 in Valencia and said to myself: “I want to do that, I want to make a career out of sailing.” I was very lucky and fortunate to join a team that went out and won the America’s Cup in 2013 and then went back to defend it in Bermuda.

After that Cup, I was looking at what to do next and I set my mind on The Ocean Race. I didn’t want to pigeon-hole myself as one kind of sailor: I want to be an all-around sailor. This next edition of The Ocean Race for me brings together my experience with foiling and cutting-edge technology in boats, alongside the adventure of The Ocean Race and I think I’m in a good position, based on my previous experiences, to make a good contribution to the team.

Q: Following up on that thought, you obviously have a lot of experience with foiling boats, especially with the AC34 and F50, how do you see that experience playing a role with the IMOCA class and the team specifically?

KL: The IMOCA is unique in the fact that it has no foil on the rudder, but despite that we will be trying to foil these boats as much as we can in a full range of conditions. The critical decision will be the wind speed you target your foils at and how aggressive you are, because you can have foils that will be quick through the Doldrums but a nightmare in the Southern Ocean. Like all development decisions there will be trade-offs and like the America’s Cup, our decisions in the early design days will strongly steer the performance of our boat for the actual Race.

Q: Joining 11th Hour Racing Team isn’t just a sporting objective to win The Ocean Race in 2021-2022, but also a commitment to sustainability and awareness and action for the benefit of the planet. What is your biggest passion when it comes to protecting our ocean?

KL: I think the first thing that really resonates with me for this campaign is that it’s not just a single-minded view for the Team but a dual mission: win and engage. We’re focusing on competing at a high level AND sustainable practices so this mission is something great to be part of. I have seen myself how much 11th Hour Racing as an organization has done across sailing, pushing new ways of thinking and focusing on sustainability in our sport. And the fact that we are looking at ways of increasing performance and efficiency of our team through sustainable practices: these are things that can pave the way for our industry to change while also helping other teams by sharing our knowledge and that’s pretty unique.

Q: Is there a specific call to action that you find most compelling?

KL: One of the biggest drivers for me is that when you’re sailing offshore for 30 days at a time, what you carry on board really matters — so we want to have materials that can be broken down and recycled or re-used in other purposes. How can we can we make the most use of various things on board in our daily lives on the boat. So to have more sustainable practices in waste management is both good practice AND benefits our team.

Q. Do you have a favorite sustainability life-hack?

KL: I’m not sure it’s a hack but I think it’s something everyone can think about. We just moved into our new house [in Gothenburg, Sweden] and we made sure it had a vegetable garden so we’re growing vegetables for our own household. I had one in Bermuda as well but it’s a different climate here. We’ve got tomatoes, rhubarb, currants, various herbs. I think growing local and eating local is huge: I’d really recommend it.

Q. Outside of sailing what do you enjoy doing?

KL: Anything outdoors! I like to get out skiing, kitesurfing, road cycling and, of course, sailing in my free time. Getting outside into nature is the key for me!

KL: Lake Macquarie is probably what I love best. It’s such nice flat water sailing and my ‘fun’ sailing is to go out foiling in a Moth. I just love sailing there so that would be the favorite.

KL: The great thing about the Race is that the stopovers are so varied and so diverse from Cape Town to Brazil to Auckland where they are just so passionate about the event and the sport. It’s been great to spend time here in Newport – our team home – as it has such a strong sailing tradition. I can’t really choose between them all ….!