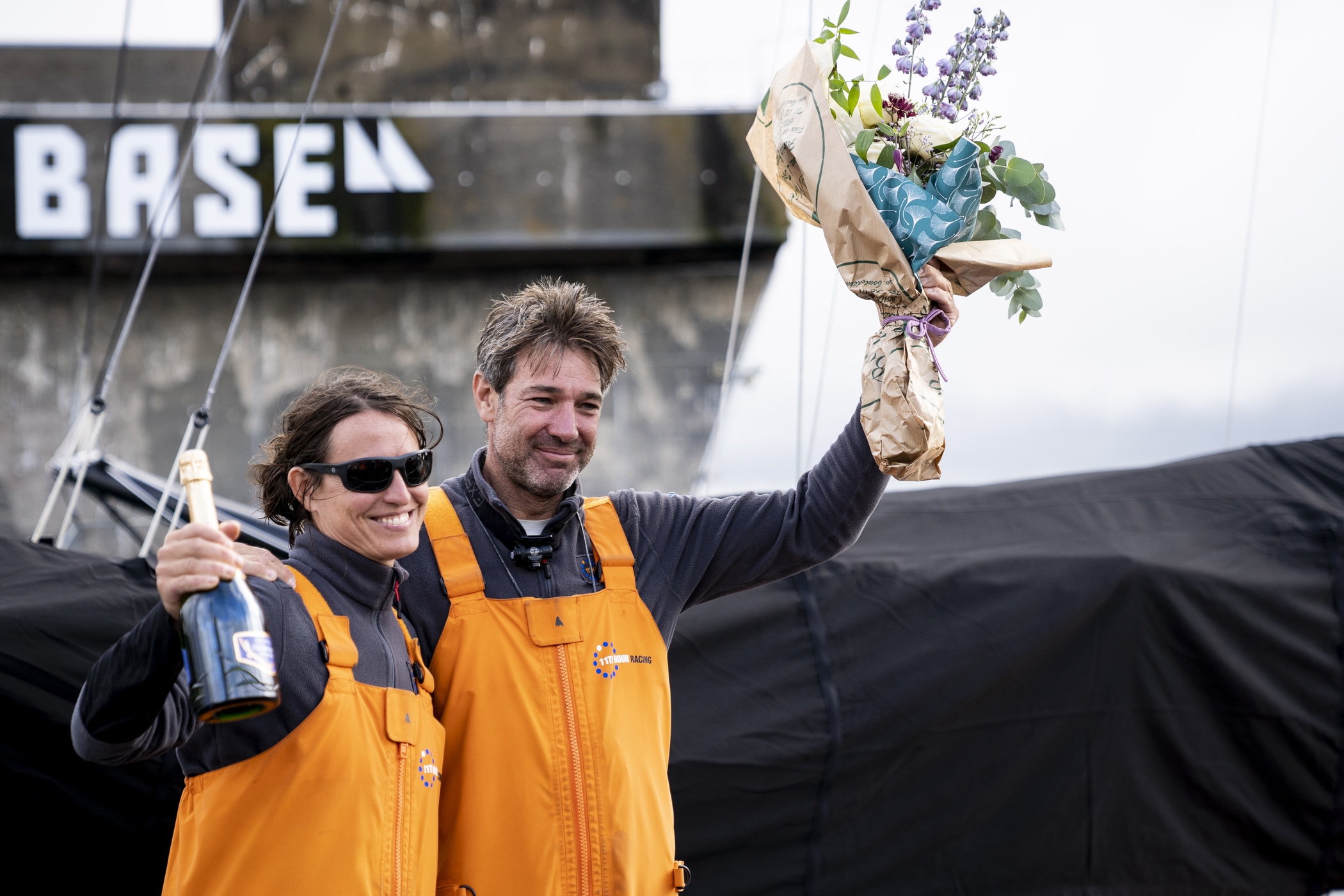 Victory in the Speed Runs and the runner’s-up spot in the double-handed 48-Hour Race – the first competition with two boats in the Défi Azimut regatta was definitely exciting for our team!

Le Défi Azimut, the first regatta our team took part in with two boats, just wrapped up in Lorient, France. This year in its 11th edition, the event is a unique annual showcase for the IMOCA 60 class.

For Mālama, this was also the worldwide debut to take part in a racing event. Naturally, there was great interest in this spectacular-looking ocean racing machine as it made its first appearance on the racecourse.

Its debut started well as Enright and Bidégorry topped the timing sheets at the famous Défi Azimut Speed Runs, when the 14 teams entered the regatta compete with each other to record the fastest timed run over a mile-long course. This year it took place in light winds and Mãlama showed her pace to head the rankings.

Then came the centerpiece of the regatta – the 48-Hour Race – which saw a full range of conditions in the northern Bay of Biscay over a 550-nautical mile triangular course to the west of Lorient. Unfortunately in the early stages of the race, the new boat was forced to retire with damage to its tiller-rudder linkage.

While there was disappointment for the crew on ‘Mālama’, who was eager to get some miles under the keel, Fisher and Mettraux were loving their own challenge out on the ocean, as they put ‘Alaka’i’ through her paces at the front of the fleet. Sailing smart and always on the pace, the crew produced an impressive display in winds that varied from 5-25 knots, to finish in second place behind the winner, Apivia co-skippered by Frenchmen Charlie Dalin and Paul Meilhat.

This was only Fisher and Mettraux’s second race together having finished third in the Rolex Fastnet Race last month, but they have already formed a formidable racing team.

“I am super-satisfied with the result,” said a delighted Fisher back on the dockside. “It was a really tough race. I’m proud that we managed to keep things together and fight until the very end. We’re still learning as a team and this experience was important for us, requiring quick turnarounds and smart decision-making when it came to maneuvers.”

Mettraux, meanwhile, was thrilled by the performance she and Fisher achieved as they continue their build-up to both the two-handed Transat Jacques Vabre (TJV) transatlantic race, from France to the Caribbean in November, and then the fully-crewed Ocean Race around the world that starts late 2022.

“It feels great to be part of 11th Hour Racing Team and get the chance to sail this boat with Si Fi,” she said, referring to Fisher by his widely-known nickname. “Our team dynamics are amazing, and we are fortunate to have a fantastic crew behind us. It’s great to train with guys like Charlie and Pascal, working towards our common vision of The Ocean Race. And it’s also amazing to work with such a strong shore team that supports and pushes us. We are starting to feel really comfortable looking at our big challenge of this season as a double-handed team – the Transat Jacques Vabre.”

The Défi Azimut concluded with a fun race around the Île de Groix which lies just offshore of Lorient. With the new boat fully repaired, both 11th Hour Racing Team yachts were on the startline with Fisher and Metrraux finishing sixth and Enright and Bidégorry ninth after just over two hours of racing. The race was won by French team LinkedOut with Apivia in the runner’s up spot.

Afterwards, Enright summed up an eventful and successful week in Lorient.

“It was exciting to see the new boat sail for the first time,” he said. “I think it has a lot of potential, we just need to log the hours, so we can realize that potential. It was a little ambitious to go out and sail the boat at such an early stage, against such strong competitors, but that’s how we learn, and it will help us get prepared for the Transat Jacques Vabre, which is our big challenge this fall.”

Next up for 11th Hour Racing Team is several weeks of training and technical preparation in Brittany before the crews head for the French port of Le Havre at the end of October, from where both boats will take on the Transat Jacques Vabre.

“We now have just over a month to go before we start the Transat Jacques Vabre which is the big focus for the season,” explained Fisher. “During the next few weeks, we will keep on training hard and use the time for some final preparations. We need to be strong, physically rested and also make the most out of the recent training sessions we have undergone in France at the racing school in Port-la-Forêt. We will also spend some time sailing alongside other boats, working on our performance and our crew dynamics. I hope we’ll have a good month of preparation to arrive in Le Havre fully ready to go”.

Looking towards the next few weeks, Enright added:

“Most of what we are doing now is operational in nature. We have barely scratched the surface on the performance side of things with the new boat and it will be another couple of weeks before we get there. We will do extended sea trialing and  test the systems and we need to nail all those things before we move on to the performance aspects of the boat. There is still a lot of work to do to make the boat prepared for a Transatlantic race, but the whole team is rising to the challenge.”

More information about the event as well as the overall rankings of the 2021 Défi Azimut-Lorient Agglomeration can be found here.