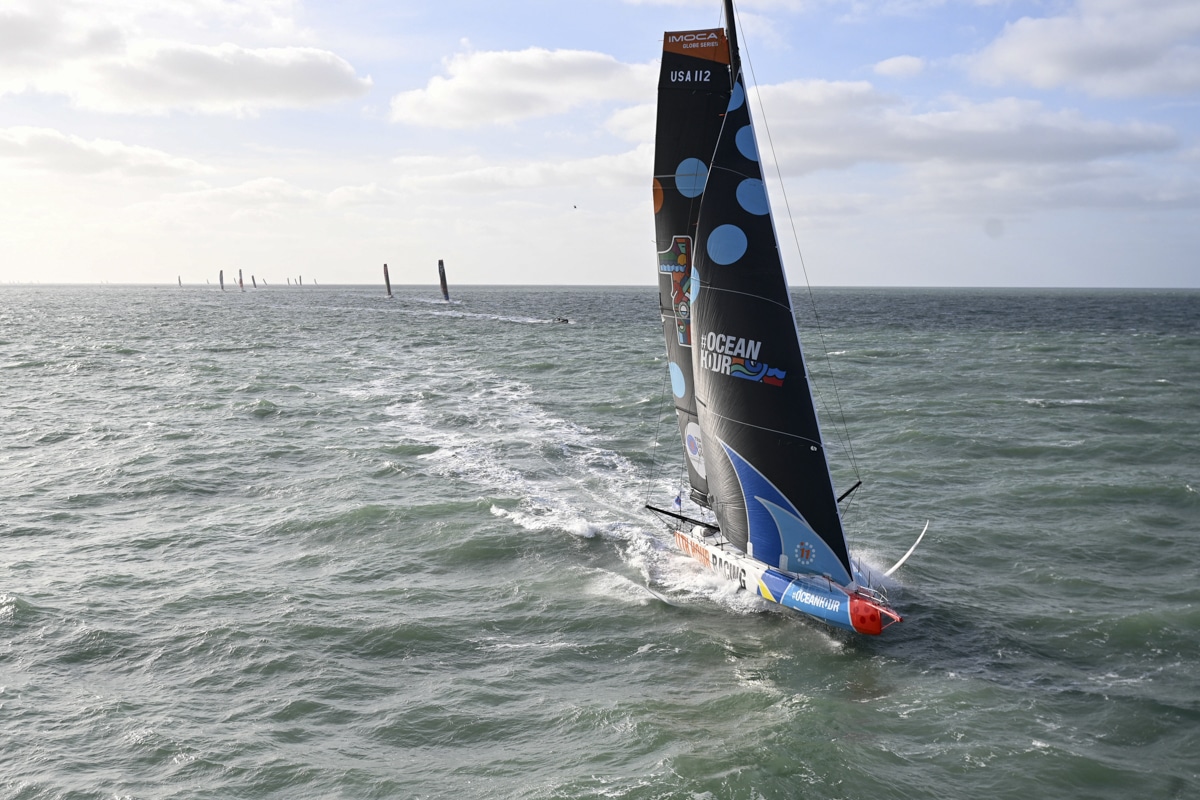 11th Hour Racing Team was the only US team taking off today in Le Havre on the iconic Transat Jacques Vabre offshore race. We are also the only team in the event’s history to send two boats in the same class across the Atlantic Ocean.

Today, November 7 at 1327 CET, our two boats crossed the start line off Le Havre, France in the 2021 edition of the double-handed Transat Jacques Vabre. With two entries in the IMOCA Class, the team’s four co-skippers will take on the 5,800 nautical mile course ​​[6,650 miles or 10,750 kilometres], from the Normandy port across the Atlantic Ocean to their final destination – the Island of Martinique in the French Caribbean.

Charlie Enright (USA) will co-skippers the team’s newly launched 60-foot boat ‘Mālama’ alongside Pascal Bidégorry (FRA) – the on this first major offshore race for the boat.

“As a team, it’s a big day for us – a culmination of a whole year’s work. I very much hope that Pascal and I can do the race, and the team, justice.”

Launched at the end of August this year, Mālama is the newest boat in the IMOCA fleet. Her enclosed-cockpit design and creative livery has drawn a lot of attention to this state-of-the-art ocean racer.

“Although we wish we had more time in the new boat – just two weeks of sailing before the start here – we do feel adequately prepared,” explained Enright. “The forecast for the race doesn’t look too heinous, which is a bonus for us, but it is very complicated. We’ll get out of Le Havre with some good breeze, but it will then taper and it will be tricky conditions as we pick our way across the Bay of Biscay and down towards the Cape Verde islands. These conditions bring additional pressures, but I’m looking forward to taking this on.”

The team’s second entry, ‘Alaka’i’, is co-skippered by Justine Mettraux (SUI) and Simon Fisher (GBR), one of five mixed male/female crews across the 22-strong IMOCA fleet. Currently on top of the IMOCA Globe Series World Championship leaderboard with Fisher, Mettraux was confident for the upcoming race:

“With many strong teams and boats in the fleet, it might be a bit over-optimistic to say we’re going for a win as the level is really high. But Simon and I work really well together and the dynamic between us and our complementary skills onboard compensate for the fact that our boat is slightly older than some others in the fleet. I am super excited and ready to go.”

Just before he left the dock, Simon Fisher, co-skipper for Alaka’i, shared his expectations for the first few days of the race:

“We are looking forward to getting underway. The forecast is pretty complicated and we have spent a lot of time in the last few days looking at the files with our meteorologist, Marcel Van Trieste. We are expecting 15-20 knots at the start with a tricky sea state, and after rounding the turning mark off Étretat and through the English Channel, the big decision will be whether we head out west or down the rhumb line across the Bay of Biscay. It will seem more straightforward when we get out there and are racing alongside the other boats.

I’m feeling good about what’s ahead of us, and well prepared, although it is hard to say goodbye to my family and to not see them for another few weeks. It’s a good reason to race fast – to come back home quickly!”

Mālama’s Pascal Bidégorry, a Transat Jacques Vabre veteran, with seven editions under his belt including a win in 2015, and a fourth with Enright in the last edition, was looking forward to getting going:

“Charlie and I raced the Transat Jacques Vabre together in 2019 and know each other well. Despite coming from different backgrounds and countries, we communicate well together and share the same competitiveness. Sailing the race on a brand-new boat is a big adventure, and I look forward to doing this with him. As we look ahead to the conditions, we’ll need to be patient and keep a cool head especially in these early days and nights. Anything can happen, let’s see how things will play out!”

For the first time in the history of the race, the sailors have a new course to tackle. Once the fleet has passed through the English channel, the IMOCA fleet will then head south down the Atlantic Ocean, through the Doldrums, before rounding the island of Fernando de Noronha off the Brazilian coast. The fleet will then head north, once again through the Doldrums and turn north west towards the finish line off Martinique. Current predictions have the IMOCA 60 fleet arriving in Fort de France, Martinique around November 25, after around 17 days and nights offshore.

Check out our Daily Download where we will be publishing regular updates from the boats as well as our social media.