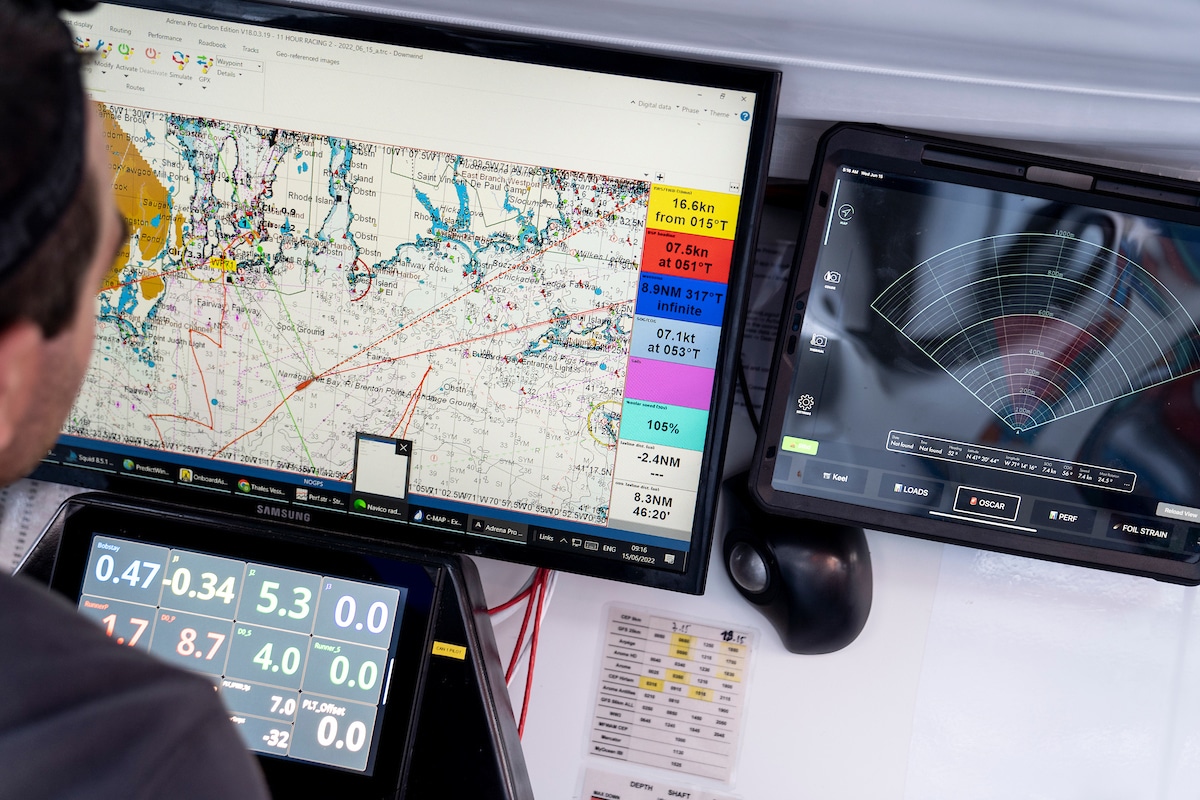 Although he’s not onboard for this race, 11th Hour Racing Team Navigator Simon Fisher has been working closely with Justine Mettraux on the navigation for the Newport Bermuda Race. With boats speeds that could reach 30 knots and waves as high as 10 feet, it’s going to be a fast and bumpy ride for our crew and special guests…

It definitely feels a little bit weird to be looking at the Newport Bermuda Race weather knowing I won’t be jumping on the boat in a few hours’ time but it does give me the opportunity to share some thoughts on the forecast. With a fast and bumpy ride to Bermuda on the cards my back will no doubt be thanking me for reasons that will become clear later on!

The weather for this year’s race (for the fastest boats at least) is on the face of it relatively straightforward, and if everything lines up a chance to break the Open Division Race record of 34 hours 42 minutes and 53 seconds could well be on the table. It’s a one tack blast down to Bermuda, beam reaching all of the way in 15-30 knots of south-westerly wind. Fast sailing on small sails with relatively few maneuvers awaits. However, as always, the devil will be in the detail and there will be plenty for the crew of Mālama to consider as they head off towards Bermuda.

The forecast all hinges on a cold front and its timing as it moves off the East coast of the US and out over the Atlantic. For our team it will be all about sailing fast to make sure they stay out ahead of this front for the duration of the race, but they will have to carefully manage their course in order to optimize both the wind speeds they are sailing in, and their wind angles in order to stay on the fastest course to Bermuda.

After starting off Castle Hill at 1:20pm local time the team onboard will want to get away from the coast and offshore as quickly as possible.  This will build an all-important margin ahead of the cold front forecasted to get out over the waters of Rhode Island this evening, and will also help Mālama get away from any clouds and squalls that may be building along the coast line this afternoon. The closer the front gets to the coast the messier the wind field can be and a badly timed cloud could threaten to ensnare the boat and allow the front to catch up, complicating things for the team onboard.

Luckily though for the first few hours of the race, the conditions should deliver a good breeze. A decent south-westerly gradient will be enhanced by the thermal effects along the coastline which should allow for a fast getaway in 15-20 knots of wind.

As land fades over the horizon behind the 11th Hour Racing Team and they extend out beyond the thermal effects of the coastline there will be a few hours to settle into the rhythm of the race.

Sailing in the cold water to the north of the Gulf Stream the wind will seem a little less potent as the warm south westerly breeze struggles to mix down to the surface and the seas will be a little flatter than you would expect. Hopefully this will deliver some fast, relatively easy miles before they hit the Gulf Stream at around midnight.

At this point though, assuming they have managed to get away from the coast cleanly, dealing with the big picture will be all important. There is a decision to be made about how far west of the rhumb line to sail. A more direct course means less miles, some faster sailing initially but also tighter angles on the approach to Bermuda. It also increases the potential for some stronger more squally conditions as they hit the warmer waters that could make life uncomfortable onboard (which on this boat is a relative term!) Conversely some extra miles sailed directly south early on will potentially make for an easier life and a fast final approach to Bermuda but the crew will need to think carefully about whether it will be possible to reap the rewards of extra miles sailed initially when they point the bow at Bermuda in the second half of the race. Getting this balance right will be a nuanced decision shaped by the latest forecasts, what they can see ahead on the satellite images and how easy the conditions are once the team is settled down offshore.

When Mālama hits the Gulf Stream the team will need to be on their toes. The Gulf Stream is always an important factor in the Bermuda Race. However with the present forecast there is little need for the team to be chasing favorable current and they will be looking to sail across the main body of the stream as quickly and cleanly as possible. When the boat reaches the warm waters and the 3+ knots of current in the Gulf Stream, the chances of squalls will significantly increase, the sea state will jack up and the wind will be more gusty and well mixed. With gust potential well into the 30s, a well timed reef or jib change ahead of the strongest conditions is likely to be all important in order for the team to manage the strongest weather with the minimum of complications.

The following hours through the night and into the next morning are going to be the hardest,  even after they get Mālama across the main body of the Gulf Stream. The winds are likely to stay in the region of 25-30 knots for some time and it will be all about keeping the boat in one piece, trying to sail fast and managing the angles to make the best of the sea state. Fast sailing on the foils inevitably means a lot of slamming, so keeping boat and crew all in one piece can be easier said than done. Sleeping can be near impossible in these conditions  and to say conditions onboard can get uncomfortable would be an understatement! It is at this point I’ll be happily watching the data from the comfort of the sofa as opposed to lamenting the fact that I’m missing out on all the ‘fun’ onboard!

The good news is that the front is likely to stall out over the Gulf Stream and once Mālama has punched through the strongest and bumpiest conditions and extends out further in front of the weather system, it should be relatively plain sailing from there on in. After no doubt a very tough 24 hours of fast sailing in excess of 20 knots boat speed the wind speeds should start dropping back into the teens and the wind direction should back slightly too allowing the team onboard to point the bow at the finish line off Bermuda whilst still maintaining fast reaching angles. With any luck this will allow everyone to enjoy the final hours of the race, hopefully with the record still in their sights!

It is no doubt going to be an exciting race, and an eye opening experience for big wave Surfer Ian Walsh and snowboarder Elena Hight who are joining the team for the blast to Bermuda. Hopefully Charlie, Justine and Amo can give them a taste of just how extreme our sport can be!