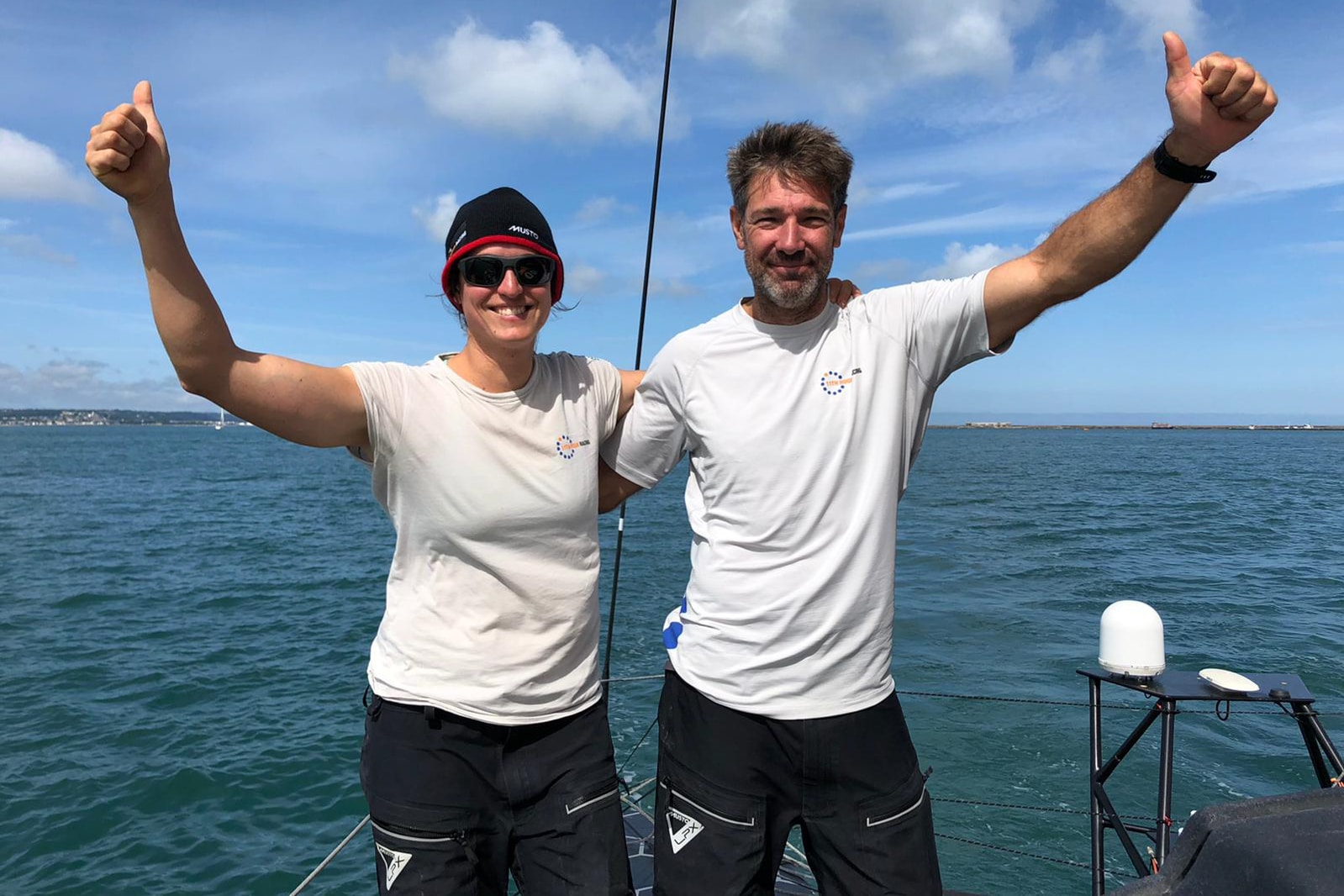 Congratulations to Justine Mettraux and Simon Fisher on their solid performance on their first race as a double-handed team: The iconic Rolex Fastnet!

Three intense days after setting off on their first competitive race, Sifi and Justine Mettraux have crossed the finish line taking third place in the IMOCA 60 class in the Rolex Fastnet Race this morning at 10:36 local time.

Juggling challenging weather conditions, heavy currents, and a crowded line-up, our team fought until the very end and snatched the third position from fellow IMOCA 60 contender Arkea Paprec only a few hours before the finish in Cherbourg.

In a nail-biting final sprint, our crew pushed hard through the final hours and made it past the finishing line at 10:36 CET – only one minute behind runner-up Charal ! Team Apivia won the IMOCA class race with an impressive lead in the fleet of 13 IMOCA 60s, arriving in Cherbourg in the early hours at 04:16 CEST.

A tired, but happy, Justine Mettraux spoke to the shore crew moments after crossing the finish line:

“It was a really good race, lots of hard work, but this result makes it worth it! We are super happy to finish with this third place in our first race as a double-handed team. Being up there at the front with the strongest teams in the Class is definitely an achievement for the two of us.

“We had a tricky start, with heavy winds of up to 35 knots for the first 24 hours, which led us to play it safe and lagging behind at the beginning. But once we made it out of the Solent, we could build up proper speed and a great routine onboard helped us push through until the very end in this super close battle with Charal!”

This year in its 49th edition, the race started on August 8th in Cowes, the British home of yachting, with the fleet rounding the iconic Fastnet Rock off southern Ireland before making a loop back east. For the first time since the inaugural edition in 1925, the Rolex Fastnet finished in the French offshore hub of Cherbourg instead of its traditional final destination of Plymouth in the United Kingdom. This change extended to course a total of 695 nautical miles (800 miles or 1,300 kilometers) and added another level of difficulty as the teams had to negotiate the traffic and tides in the English Channel.

‘Sifi’, who has competed in the Rolex Fastnet multiple times in crewed set-ups since 2001, ran through the key moments of his first race alongside Justine:

“Neither Justine or I have ever done this race double-handed and we knew we had to learn quickly how to efficiently manage our energy, to be able to push hard when it really mattered. We had a really good race on our hands with Arkéa Paprec, and eventually were able to pass them, and we fought Charal all the way to the finish line. It’s been a good first race for us both and we are now looking forward to the Défi Azimut next month.”

Before taking on The Rolex Fastnet Race, Sifi and Justine got solid practice on 11th Hour Racing Team’s IMOCA 60 ‘11.1’, competing in The Ocean Race Europe earlier this year alongside skipper Charlie Enright (USA), Navigator Pascal Bidégorry (FRA) and media crewmember, Amory Ross (USA). The duo then delivered the IMOCA 60 from the event’s finish in Genoa, Italy back to France, spending over a week practicing double-handed sailing in a variety of conditions.

Switching into race mode is, however, a whole different story, as Sifi explained:

“Neither Justine or I have ever done this race double-handed and we knew we had to learn quickly how to efficiently manage our energy, to be able to push hard when it really mattered. We had a really good race on our hands with Arkéa Paprec, and eventually were able to pass them, and we fought Charal all the way to the finish line. It’s been a good first race for us both and we are now looking forward to the Défi Azimut next month.”

After crossing the finish line in Cherbourg, Justine and SiFi are now on their way back to the 11th Hour Racing Team base in Concarneau, Brittany. After a few well-deserved days off, the duo will then get back on the water for the upcoming Défi Azimut, starting on September 15 in Lorient, France.

Alongside Justine Mettraux and Simon Fisher, there will be a second double-handed crew representing 11th Hour Racing Team. Co-skippered by Charlie Enright and Pascal Bidégorry, the Défi Azimut will be the debut race appearance for the Team’s brand-new IMOCA 60 ‘11.2’.

Designed by Guillaume Verdier and built at CDK Technologies, the new boat blends sporting performance and sustainable innovation and has been created to compete in fully crewed, short-handed, and solo offshore races.