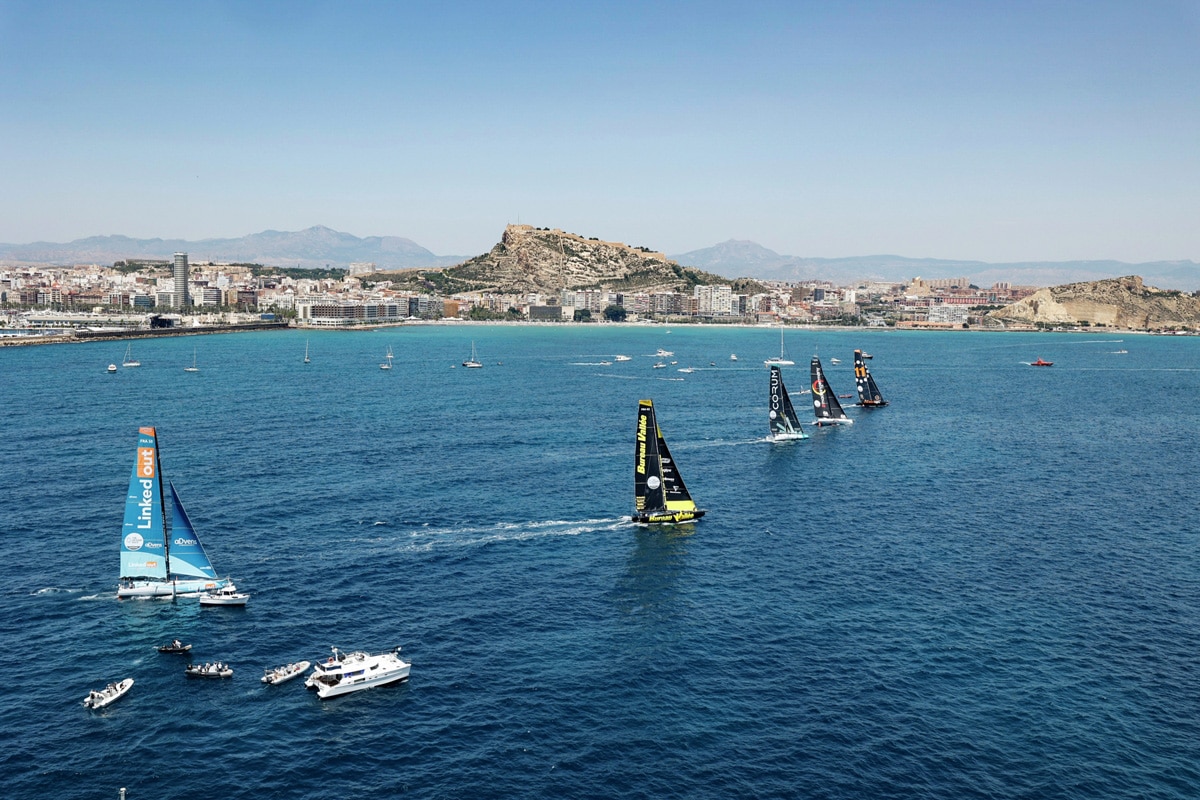 This afternoon, under the bright Spanish sun, 11th Hour Racing Team set off on the third and final leg of the inaugural Ocean Race Europe, from Alicante, Spain to Genoa, Italy.

Currently tied for first place with LinkedOut and Offshore Team Germany with nine points, the result on Leg 3 will be decisive for our chances of overall success.

Beginning the race in the Mediterranean Sea presents very different conditions from the previous starting points along the Atlantic coast. Due to an extremely light wind forecast, race management made a course change less than 24 hours before the start, shortening the course and directing the fleet straight from Alicante to Genoa.

Our skipper Charlie Enright provided insight on the conditions ahead: “Conditions are tricky. We should have a bit of wind getting out of Alicante, but then there is no definition in the weather pattern. We have a very weak high, and a very weak low, with little to no gradient in the middle, and that’s essentially the case for all the Mediterranean Sea right now. The first leg was very frontal in nature, the second was more geographic in nature, and I would say that this one will be marked by a lack of gradient, which generates a lot of uncertainty.”

Light winds are not the only challenge the Team will face on this final Leg. Following an incident in the port of Cascais, the crew will be sailing our IMOCA 60 with only one foil on the starboard side, as the port foil was taken back to France and is currently being repaired at Multiplast.

Our navigator Simon Fisher shared his insights on the different routing options: “There’s a decent easterly breeze further to the south of Alicante and the Balearic Islands. But, at some point, we have to go north. If we go north straight out of here, we will encounter extremely light conditions around Valencia and might get stuck, so the direct course looks difficult. We also have the option to head south-east with the gradient we currently have, but then the question is – can we then get ourselves back north again? It’s going to be an interesting leg, and I am excited to see how the different teams decide to deal with it.”

In addition to looking at the routing and weather forecast, the entire team – sailing, shore and communications – took some time to become more knowledgeable about the waters that we are sailing in ahead of the departure. On the occasion of our #OceanHour Session program, we caught up with Brad Robertson from Save the Med. Brad shared his vast knowledge about the Mediterranean Sea, including the marine wildlife the crew might encounter along their journey. He also pointed out how the climate crisis affects their natural habitat and how Save the Med is working hard to turn the tide in these local waters. Success stories like the one of the Atlantic Blue Fin Tuna, whose population is slowly recovering thanks to precautionary conservation measures and highly restrictive fishing quotas, are encouraging to keep on racing for ocean health.

Our very own Amory Ross also took the opportunity to share his knowledge of The Mediterranean on World Oceans Day during Leg 2 of the race.

Following our strong comeback after the delayed start on Leg 2, Charlie is confident the crew will be able to repeat a solid performance:

“A lot of people could look at the forecast and think it’s daunting or fickle, but I see opportunity. Given that we only have one foil, the conditions are potentially better for our current boat set-up. We have smart people onboard and our chemistry is great, allowing us to set up a balanced racecourse. I trust us to get this last Leg right.”

The Ocean Race Europe started on May 29 in Lorient, France and reached its first stop in Cascais, Portugal on June 2, where both participating fleets of VO65s and IMOCA 60s competed in a coastal race on June 5. The offshore race then continued on Leg 2 leading from Cascais through the Strait of Gibraltar into the Mediterranean Sea, arriving in Alicante on June 9.

The fleet of IMOCA 60s are set to arrive in Genoa on Thursday, June 17, where a final coastal race on Saturday, June 19, will determine the overall winners of The Ocean Race Europe.

Keep your eye on the live tracker and stay tuned for more onboard updates in our ‘Daily Download’ here.