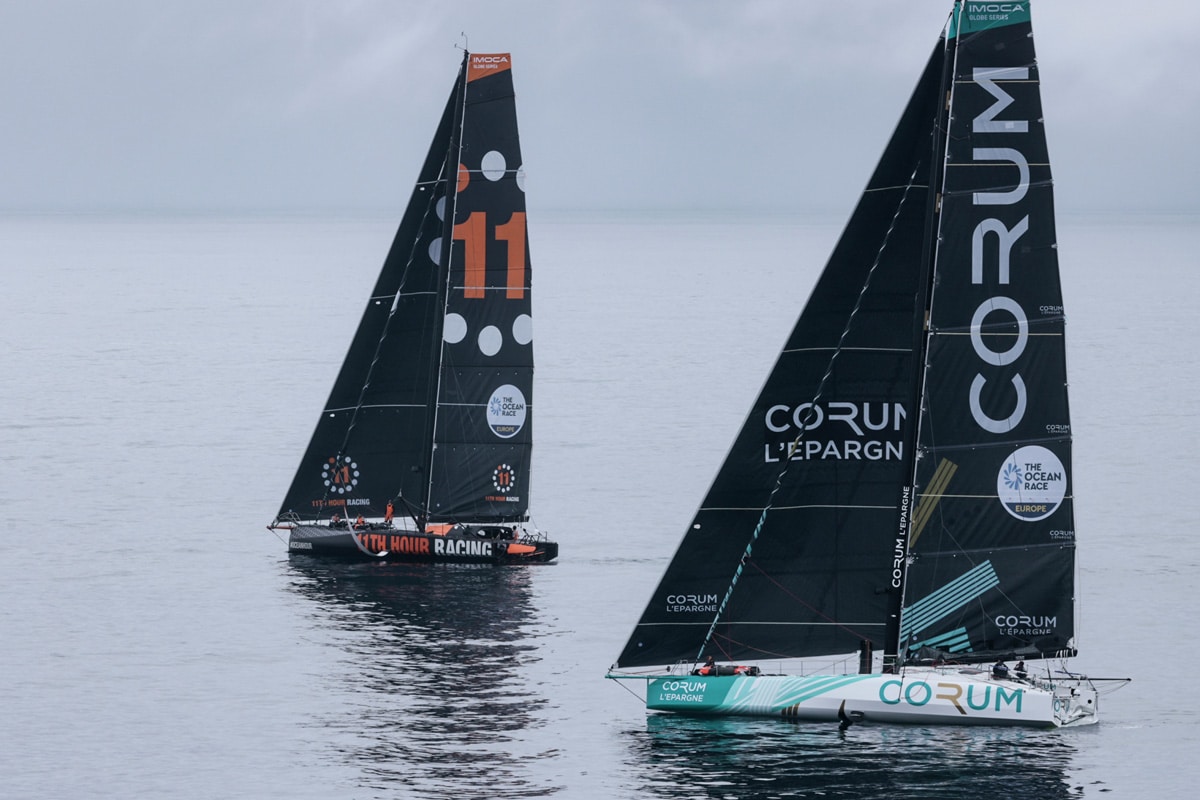 From calm spells to ‘beast mode’ – 11th Hour Racing Team tackled the multiple personalities of the Atlantic in the race from Lorient to Cascais, crossing the finish line in second place in the first leg of The Ocean Race Europe.

Speaking on the dock, skipper Charlie Enright commented, “It was an intense and difficult leg, a lot of lead changes, a lot of close racing, with a variety of different conditions. We saw strengths and weaknesses from every boat. Everybody was fast at times, everybody was also slow at times. It was just amazing how close it was, how intense. There was not a lot of sleep and having the constant position reports is a feature – I’d say it elevates the stress levels!”

The Ocean Race Europe is the first ever fully crewed race for the IMOCA 60 class – with five crew onboard – and the first time 11th Hour Racing Team has competitively raced since the Transat Jacques Vabre in November 2019.

It was not all plain sailing for the team. On the second night of the race the crew battled issues with the onboard electronics after the compass was damaged, resulting in, what Navigator Simon Fisher described as, a ‘pirouette’ on the water. The failed compass meant the Team was unable to use the autopilot for 12 hours and had to hand-steer through the most challenging conditions of the race. Listen to Charlie recount the story in this video here.

After racing more than 2,000 nautical miles from Lorient, France, there was almost an on-water restart during the early hours of the final morning when the chasing boats caught up with the leaders and the fleet was spread out north to south by just 15 nautical miles. As the two fleets approached the Traffic Separation Scheme, the choice of whether to sail above or below the exclusion zone became one of the deciding factors in the final Leg results, with the boats diving south seeing the positive gains.

Simon commented, “Overall it was a tough race, tactically there was quite a bit going on, and the last 24 hours were really hard. We were sailing in quite strong winds, trying to get through a front, sailing very fast, but it was tactically very difficult because none of the weather models lined up. Testament to the entire Team – the belief we could win the leg was ever-present.”

Despite a minor collision with AmberSail 2 in the final miles of the race, Charlie was pleased with his team and the boat’s performance. “This boat, these new foils and in particular the sail sets, we feel very, very confident with. We think that this boat is as competitive as any boat – the way we have set it up, given the work we have put into it, and how well we know it. Because we have been sailing around by ourselves, it’s great to validate on the racecourse what were previously only assumptions.”

Leg 2 of The Ocean Race Europe will start on Sunday, June 6 at 1:45 PM local time, when the two fleets will line up again for the race to Alicante, Spain.

Catch up on the content from the boat during Leg 1 here.