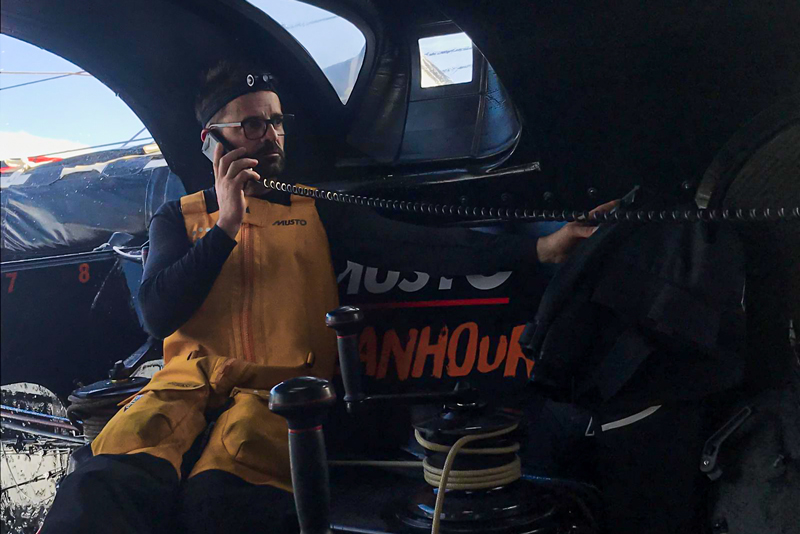 With 11 days of racing behind them, 11th Hour Racing Team is in contention for a podium finish in the 2019 Transat Jacques Vabre as the IMOCA fleet approaches the equator and the final days of sailing into Salvador de Bahia, Brazil this week.

The strong showing thus far for co-skippers Charlie Enright and Pascal Bidégorry comes perhaps as no surprise given the pair’s transatlantic experience and the proven speed of the 11th Hour Racing yacht, but run counter to the tempered expectations of Enright and the whole team.

Several times during departure festivities in Le Havre, Enright was careful with his words. “We’re just hoping to finish and get as much information on our boat out of this as we can,” remarked Enright on the start weekend, viewing the Transat Jacques Vabre in the bigger scope of the team’s campaign towards The Ocean Race in 2021.

But as the starting gun sounded last Sunday, October 27, Enright’s competitive juices kicked in as expected. The team has been full-on since despite a few setbacks, including the lack of connectivity for several days preventing the duo from getting proper weather reports, a penalty assessment and a day of sailing in which they faced the gamut of challenges.

The team has been in the top five of the standings for much of the past week and was briefly in second place Wednesday as the pair headed towards the equator south of the Cape Verde Islands.

“We’re doing everything we can just to push while it matters,” said Enright early this week. “We’re not getting a lot of rest. When the opportunity to strike comes, you’re like ‘we’re going to just grab it.’ It’s crazy trade wind sailing, so it’s push, push, push while we can.”

More recently, the team was assessed a 1.5 hour penalty for inadvertently breaking the seal on the boat’s engine a day out from Le Havre. Following race protocols, Enright and Bidégorry immediately photographed and reported the incident to the race officials at the time and the seal was replaced.

Race officials then assessed a 1.5 hour penalty after deliberations — a penalty that 11th Hour Racing served per race rules before crossing the equator. The team stopped racing at 8:37 local time (3:37am EST) on Wednesday and resumed racing 90-minutes later at 10:07 from the same coordinates where the penalty went into effect. The team dropped from third to fifth in the IMOCA standings during the suspension of racing.

Taking the penalty was part of a very busy last 24 hours for Enright and Bidégorry. Over the span of Tuesday and into Wednesday morning, the pair dealt with the boat hitting something with the keel, a sail that went overboard and an engine that overheated.

“We checked with the endoscope, no damage,” said Enright of the keel. “Then we lost a sail over the life lines, luckily it was tied on well, then the engine overheated, had to change out the exhaust system, while this was happening, we broached in a 30 knot puff and tore our A3. Once we got that under control we came back to a dead-ship…oh yeah, and we saw a water spout.”

Enright and Bidégorry are now pushing on and extracting every bit of speed from the boat and their reserves from within — the equator just about a day away.

“It will be a fight for that last spot (on the podium). We’ll keep pushing, we have been the whole time,” said Enright. “The pace has been pretty insane.”

“It’s a drag race now,” said Bidégorry, as 11th Hour Racing dueled with other boats like Banque Populaire led by Armel Le Cleac’h and PRB with co-skipper Kévin Escoffier. “We’ve crossed paths several times with Banque Populaire under spinnaker and us under gennaker. Everyone is working out their own way.”

After passing through the calm of the Doldrums and the equator, the “drag race” into Salvador will be back on and the quest to catch leaders Charal and Apivia will begin in earnest with 100 nautical miles separating the two leaders from the chase pack including 11th Hour Racing, Banque Populaire and PRB.

Arrivals into Brazil for the IMOCA class leaders are expected on Saturday-Sunday morning. Follow all of the latest updates and race movements from 11th Hour Racing here.