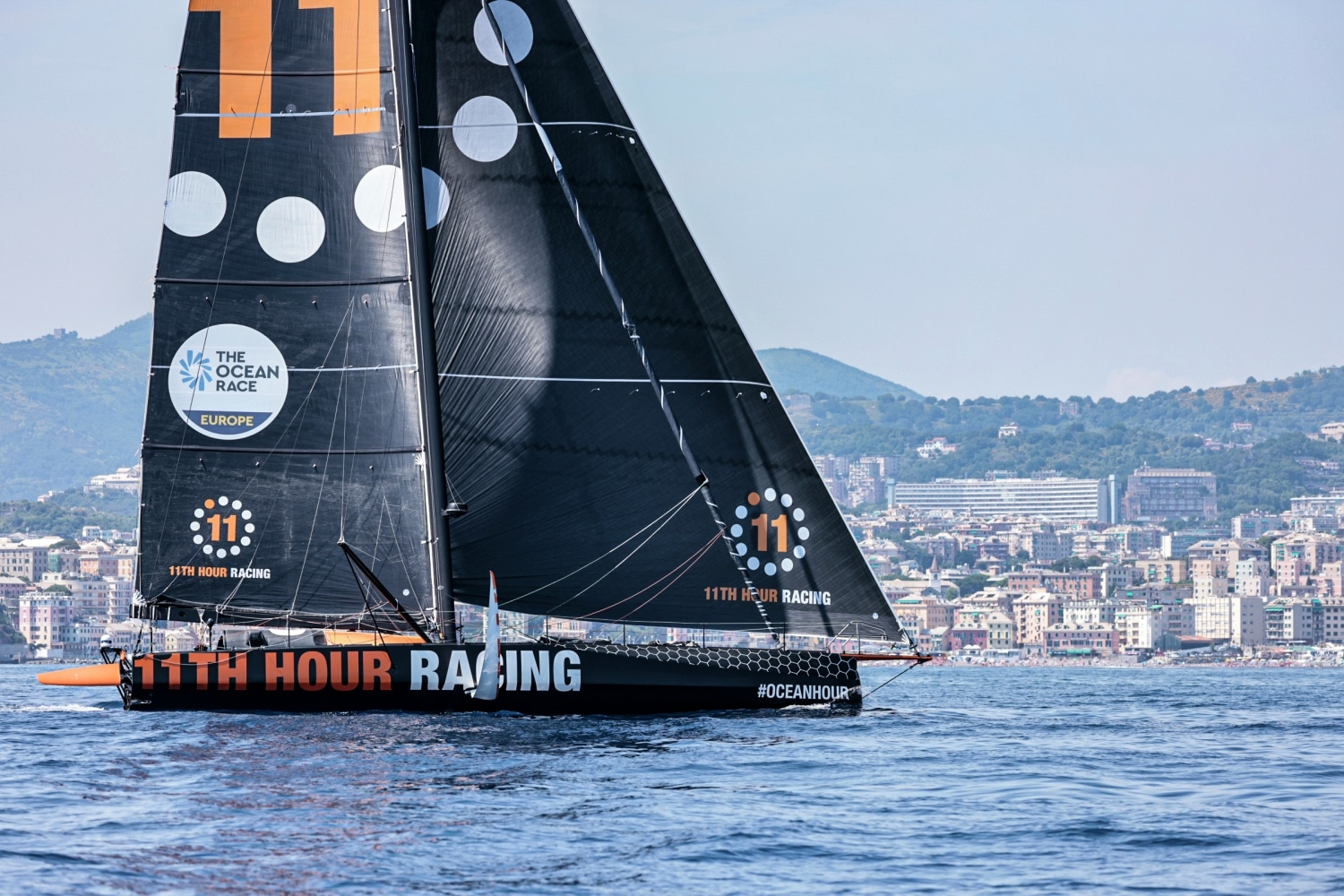 The third and final offshore Leg of The Ocean Race Europe wrapped up today in the Italian City of Genoa. 11th Hour Racing Team finished in the third position, after an exhausting four-day battle in light wind conditions through the Med.

Leg 3 of The Ocean Race Europe wrapped up today in the Italian City of Genoa. 11th Hour Racing Team finished third, after an exhausting four-day battle in light wind conditions through the Mediterranean Sea. Our team also sits third in the overall event standings with 12 points, behind LinkedOut with 13 points, and Offshore Team Germany with 14 points. One final opportunity remains to take the overall win this Saturday in the Coastal Race.

In the end, it was Offshore Team Germany who snatched the top spot on the podium, arriving at 11:40AM local time, almost four hours before runner-up, LinkedOut who arrived at 15:13. 11th Hour Racing Team came crossed the finish line just 13 minutes later at 15:26.

Newcomers to the IMOCA 60 class, Offshore Team Germany took a risk early breaking away from the rest of the fleet, choosing a Northern route, while 11th Hour Racing Team, headed southeast with Corum L’Épargne, Bureau Vallée, and LinkedOut.

“Leg 3 was a really tricky one. It started well for us with great reaching conditions leaving Alicante. Then we spent a lot of time southwest of the Balearic Islands, waiting for a front to materialize, which worked well for Sailing Poland when you look at the VO65 Group. It was disappointing not to see the same happening for us, but we had a good split coming off Menorca and were in second for the last 36 hours of the race.”

Sailing side-by-side and trading positions with LinkedOut has been a strong trend in each Leg of The Ocean Race Europe, and this Leg was no different. In the final miles of the race, the breeze lifted and LinkedOut foiled into second place.

“LinkedOut flew right past us at 19 knots to our 11 or 12 knots without the port foil. This was frustrating, but something we saw in the forecast, so we were mentally prepared for it and we kept fighting until the end,” said Enright regarding the change in position.

said Enright regarding the change in position.

Marked by fickle, very light breezes, and blistering heat, the weather conditions of Leg 3 were extremely challenging for the crews, requiring patience and cautious, well-timed maneuvers. Prudent sail changes and accurate steering demanded high levels of concentration, while constantly adjusting the route to the changeable pressure fields and low gradients.

With the majority of the IMOCA fleet packed closely together, every second counts when setting up the boat for a maneuver. The key was to never stop and lose the momentum generated through meticulous efforts. With the autopilot system being less reliable as conditions became unstable, our crew had to steer most of the Leg manually, adding extra pressure to the sailors’ heavy workload.

Managing the crew’s stress levels and keeping the spirits high was one of Enright’s top priorities on Leg 3:

“These were four long days of fighting. Through every tactical challenge, every mental challenge, it was crucial to stay sharp and make the right decisions day after day. In the end it came down to boat speed and a really wide finish here in general, but we are happy with our podium finish, and we felt we sailed well given the limitations. The IMOCAs aren’t really designed to sail in these light conditions, so it takes a lot of concentration and a lot of teamwork. I’m certainly proud of how the team performed.”

The Ocean Race Europe is far from over, with the event scheduled to fully wrap up with the Coastal Race on Saturday, June 19. On the overall ranking, 11th Hour Racing Team currently sits in 3rd position with 12 points, behind LinkedOut (13 points), and Offshore Team Germany in first (14 points).

Swiss sailor Justine Mettraux is confident about this opportunity:

“We did really well in the last coastal race in Cascais. We have to continue to work smoothly together as we’ve done so far and maneuver the boat well. This last part of the race is a very different exercise compared to the longer legs, but I think we will be good at this, and will definitely give our best for this final spurt.”

The winner of the coastal race will earn 3 points, meaning anything is possible with a shakeup in the standings- even an overall victory for 11th Hour Racing Team. The forecast is once again calling for extremely light winds in the Gulf of GenoaGenova. Although this may seem tedious, the conditions are optimal given The Team’s current foil set-up.

The final moments of the Leg 3 arrival in Genoa can be watched here. Congratulations to Team Offshore Germany and Mirpuri Foundation Team, winners in the IMOCA 60 and VO65 classes!