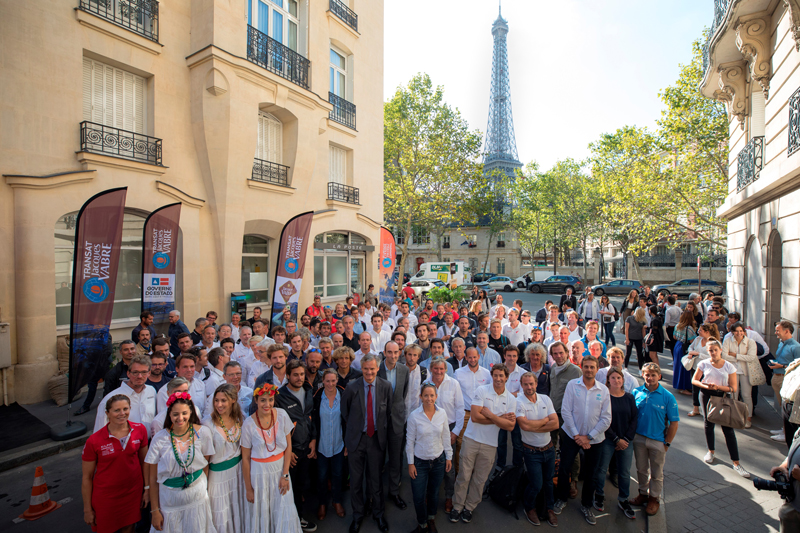 Charlie Enright and Pascal Bidégorry headed to Paris on Tuesday to make a pair of public appearances in the City of Lights less than two weeks after officially announcing the formation of 11th Hour Racing Team with teammate Mark Towill.

Charlie’s day began with a mid-day talk at the Tip & Shaft/Connect Paris Conference to discuss the recent title sponsorship with 11th Hour Racing, the team’s sustainability initiatives, how sponsorships can inspire environmental action and the current landscape for sponsorships around the sport of sailing in general.

He then made his way to the official skipper’s press conference for the 2019 Transat Jacques Vabre together with co-skipper Pascal Bidégorry, who will be Enright’s partner on board 11th Hour Racing at the start of next month’s race.

The pair were two of the nearly 100 sailors on-hand at the historic Eiffel Tower Theater to formally kick-off the countdown to the start of the Transat Jacques Vabre on October 27 in Le Havre, France.

“It’s great to be amongst such top sailors and legends of the sport here in France,” said Enright of the event. “It gets your competitive juices flowing and puts your mind in race mode. But first we have some other racing to do and a few more weeks of training to focus on before shifting gears to our first transatlantic race for 11th Hour Racing.”

Bidégorry is a seven-time Transat Jacques Vabre competitor and two-time winner in 2005 and 2015.

Charlie’s busy day ended by catching the last train out of Paris headed to Lorient, France for the start of the Defi Azimut (“Azimut Challenge”), a series of races over the course of five days from July 18-22 that will test some of the top sailors in the world with racing off the coast of Southern Brittany.

Charlie has sailed competitively in these waters before, having skippered Team Alvimedica into Lorient in the penultimate leg of the 2014-15 Volvo Ocean Race and then skippering Team Alvimedica from Lorient to Galway, Ireland for the win on the final leg to the 2014-15 race finish.