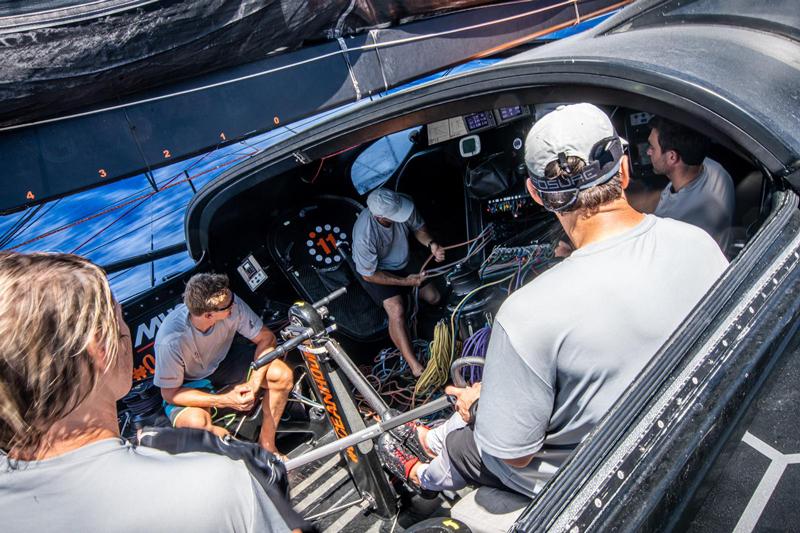 Onboard Reporter, Amory Ross, gives us a glimpse of life onboard an IMOCA 60 with six crew as the team completes the delivery back to France after finishing the Transat Jacques Vabre in Brazil.

We’re waving goodbye to South America 55 hours into our trip back to France, with Brazil and the buildings of Santa Rita quickly growing smaller behind us. It has been an exciting start to the 16-day journey with strong but steady headwinds and big waves giving way to lighter winds and diminishing seas. Sunshine and deep blue water the whole way and the miles have been coming easily – probably a little easier than acclimatizing to life onboard.

In addition to the obvious requirement to get the boat back to its training base in Brittany, the team is using these 4,100 miles to practice in The Ocean Race crew configuration, with a particular focus on adapting to living conditions for six crew. Our IMOCA 60 was originally designed to house one sailor. Charlie and Pascal’s Transat Jacques Vabre effort doubled that number, but they were more or less in an alternating routine. Six crew is something else entirely.

Everything we do right now is a compromise. There is no true galley. There is no head. There is realistically one bunk, and one fan. The nav station mandates you sit in the companionway. The cockpit is small, with proper seating for one. Even though it’s a big and beamy boat, the layout and fit-out are all engineered for one – so you can imagine the load six is creating.

There are often times when four of us are up, crowded in the cockpit under the sliding roof. Or there are other times four of us are trying to sleep, scattered around the interior on bags and against bulkheads. It is a challenge, but one we expected. How best to overcome a lot of these new obstacles? What can we do to this boat, now, to improve quality of life onboard and efficiency of sailing? It’s a new thing for the class – and we’re lucky to have this longer trip to start answering some of those questions. How does the weight of six and what are the supplies needed for six? Where can we put all that gear?

Everyone’s keeping lists and everyone’s throwing out ideas, so as crowded and hot as it may be, it’s the beginning of a long process. Even in relative congestion, it’s beautiful out here and we’re having a lot of fun in a relaxed “delivery” mode!