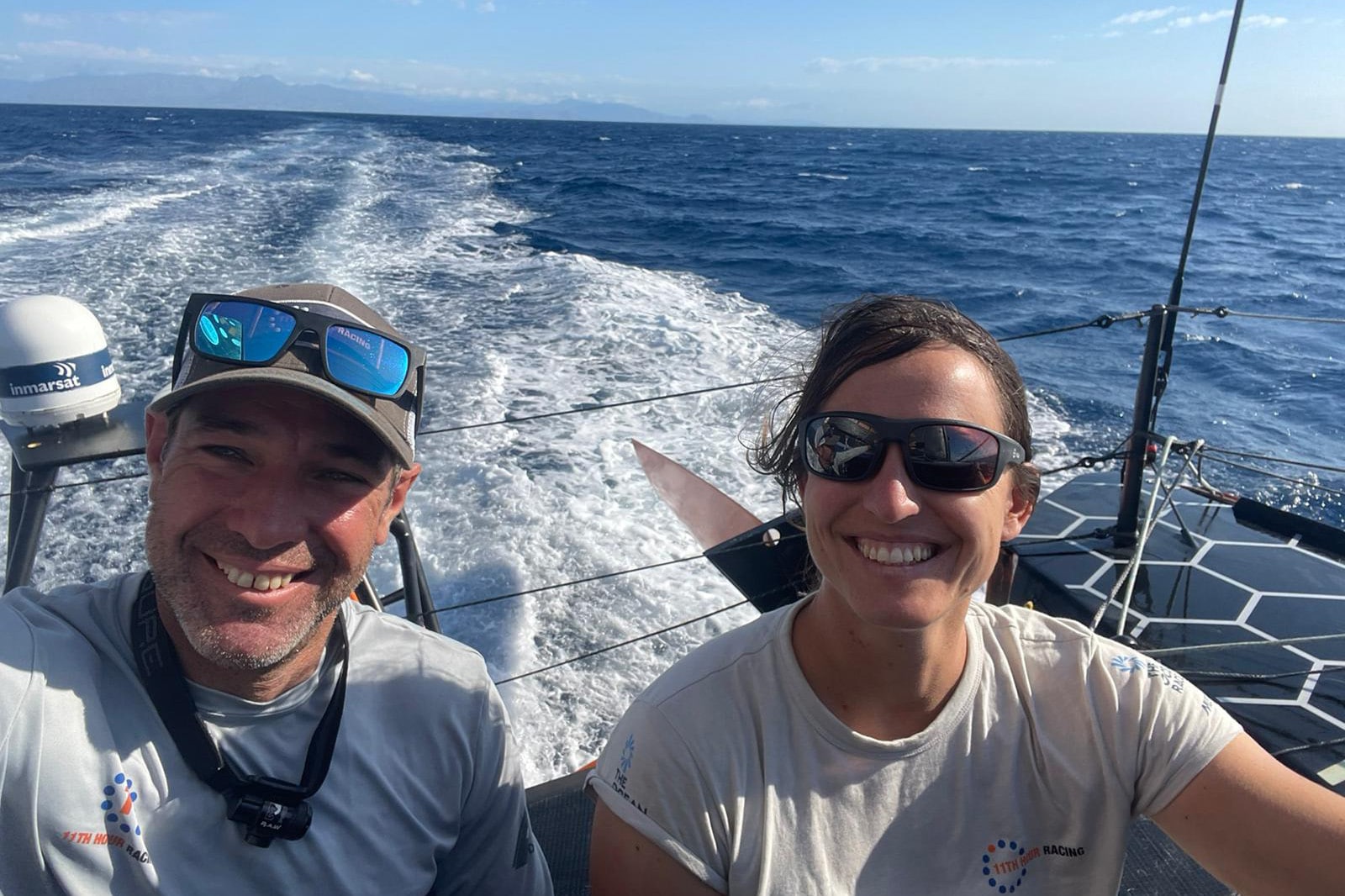 Simon Fisher and Justine Mettraux continue their way along the Spanish coastline, giving them plenty of opportunities to fine-tune their setup as a double-handed crew in fun conditions. Simon aka SiFi has sent us another blog to give us some insights to life on board the IMOCA 60.

Three days into our trip and we have both settled well into our rhythm onboard. We have tried to work to 3 hours on and 3 hours off, which in the pleasant conditions we have had in the last 24 hours has allowed for plenty of rest.

The wind has been on and off as we have sailed down the Spanish coast, dealing with the diurnal wind trends and picking off the headlands and towns one by one. Today as day broke and thunder and lightning struck some distance behind us, we passed Denia, then later Alicante, and as the winds eased this afternoon we passed offshore of Cabo de Palos. Now as the sun is setting we are closing in Cabo de Gata.

The good winds have been short-lived but frequent and when they arrive the water has been flat allowing fun and easy sailing with the foil.  It’s nice to see the speeds pushing up well above wind speed and the bow lifting clear of the water. The pace with the foil has always looked promising, with Justine particularly happy to hit 25 knots of boat speed in just 14 knots of wind!  I haven’t been quite so lucky today, with our watch system seeming to always time my arrival on deck perfectly to see the wind disappear again, much to JuJu’s amusement. I then spend the next 3 hours waiting for the pressure to come back again, working hard to keep the boat moving along, looking at the sky and clouds at the convection line marking the decelerating wind. One of the downsides of traveling at well over wind speed is when you are sitting on the front of a new line of breeze, it is entirely possible to outrun it!

Life onboard so far has been comfortable. What once seemed like a tiny boat as we cram 5 people inside in a crewed configuration now seems big and empty. Gone are the bodies lying around downstairs,  the need to be climbing over each other and struggling for space or privacy. Just one other person tucked away in a bunk, leaving plenty of space to roam around.

Even though we are double-handed, it is surprising that you spend so much time alone.  While one sails, it is important that the other can rest, so we can keep sailing fast 24/7. The lack of banter on board means you spend more time listening and feeling the boat. Each creak and groan and the sounds of the water rushing by becomes familiar, and you instantly recognize when something changes, a cue to check things are working well or change the trim or the pilot.  It’s fun to have the boat to yourself, but equally good to know there is someone else onboard to work with when things start to get busy.

We have been taking each opportunity to practice maneuvers where possible. Our gybing is steadily becoming routine and the changing wind speeds today have allowed us to work through the different headsail peels, allowing us to work on the timing and find ways to be that little bit more efficient. It is hard to get out of race mode, especially if one of us relaxes the other is there to push the pace, move the stack around or put that extra gybe in as you know that in a race you could make a could gain by putting in that extra bit of work.

As the sun sets on another day, we have just peeled to the A2, our nylon spinnaker.  Overnight we can get some good testing on this sail as well as a little more gybing practice. Hopefully, the performance will be good also. Having spotted Mirpuri’s VO65 ahead of us earlier today, I think the both of us have been quietly working to put them further over the horizon behind us!