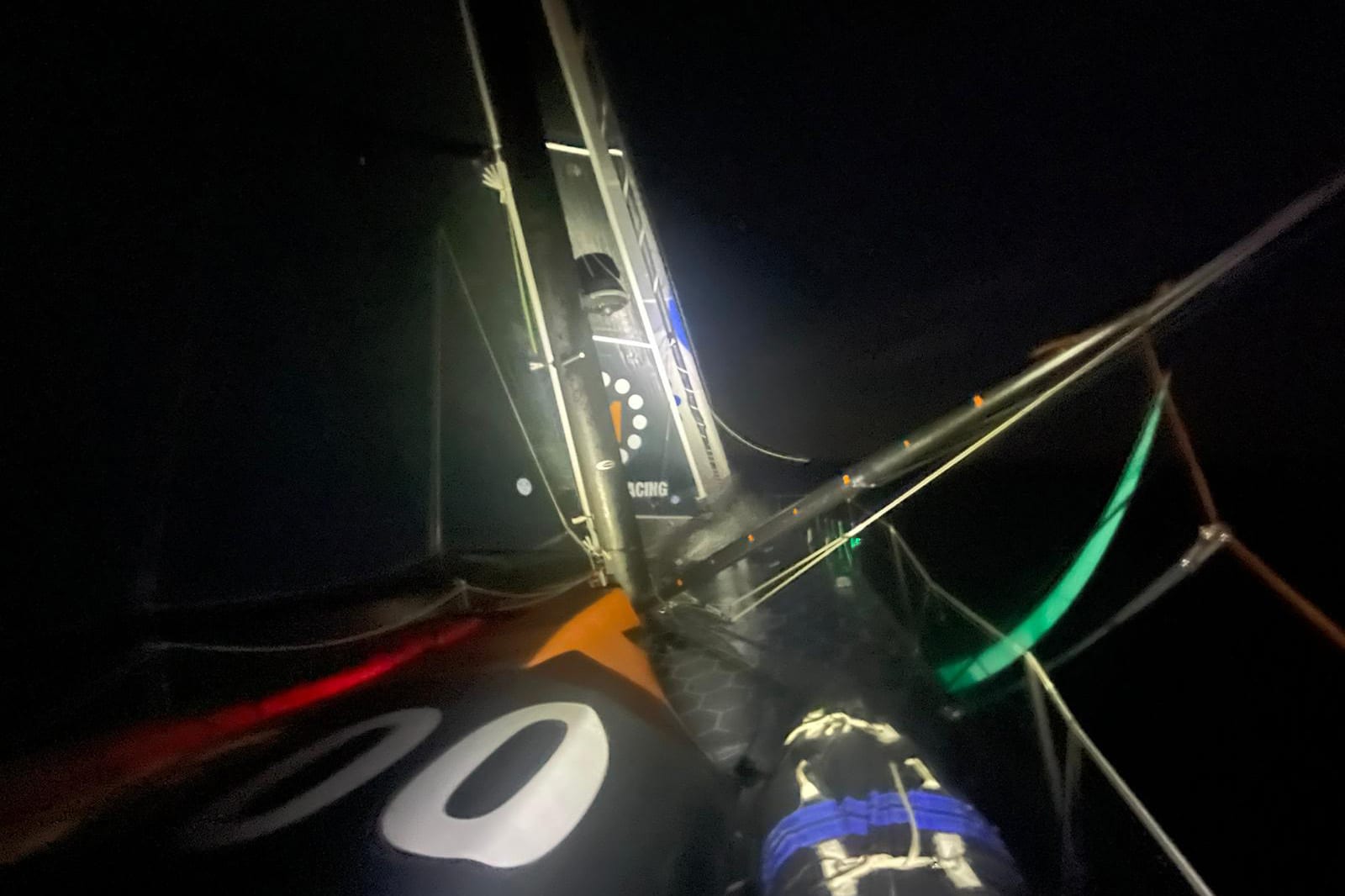 Swapping sunny skies for a cover of clouds, Justine and SiFi approach the Bay of Biscay on Day 6 of their delivery trip. While restful sleep becomes scarce, the crew enjoys a constant flow of their latest invention: homemade “iced” coffee.

Our sixth day at sea has rolled on by without incident. Having tacked near Cascais last night we have seen little in the way of land due to our position offshore, and it seems unlikely that there will be an opportunity for a land-hoe call until we near Finistère tomorrow morning. This however isn’t a problem for anyone other than those hungry for more photos from off the boat!

Unraveling the best strategy for sailing up the coast has actually been quite an interesting one. It’s also the case we are feeling quite grateful that this leg hasn’t been the 400-mile dead beat, upwind slog up the coastline in 20 knots that it could have been. The reality has been a somewhat kinder relatively straightforward trip with the majority of time spent on port tack.  The interesting bit has been choosing when to do the time on starboard by picking the way through the wind shifts whether these are driven by the synoptic systems and changing weather patterns, the geography of the coast, or both.

There have been good markers in the sky as thick cloud cover at times has seen us say goodbye to the sun for the first time since leaving Genoa. It has also made for some quite tricky conditions with wind speeds up and down and shifting through 40-50 degrees meaning when on watch there is little time to relax and the boat needs constantly re-trimming. This has at times has been frustrating as both are difficult to get into the groove and other times all together more satisfying such as when a rain cloud came through and allowed us to ease sheets and get ripping on the foil for a good 30 minutes straight up the course!

Fortunately when off-watch the good sleeping has continued, so energy levels have remained sufficiently high and where needed a steady flow of ‘Iced’ Coffee has been available. The iced coffee probably warrants some further explanation. By iced I mean made from cold water as we have no ice and by coffee I mean instant which it turns out will dissolve quite happily if the water hasn’t been boiled. A slight miscalculation on how much gas was required for the trip has meant in order to err on the safe side hot coffee has been something reserved for when we have had too much hot water at meals or certain special occasions like appearing on deck looking like a zombie in the dead of night and one of us taking pity on the other and deciding a hot drink is definitely required!

And so each watch of three hours has rolled by,  punctuated by the odd tack and a bout of stacking here and there. The only thing slightly out of the ordinary was the wooden stake that we caught on the rudder attached to a bit of fishing line. It was probably one of the more unusual bits of fishing kit I’ve seen but something we have managed to rescue from the ocean nonetheless.

Tomorrow we look forward to Finistère and Biscay and finally pointing the bow at our destination but for now, I’m going to climb into the bunk for a couple of hours and revive myself with an iced coffee when I wake up!