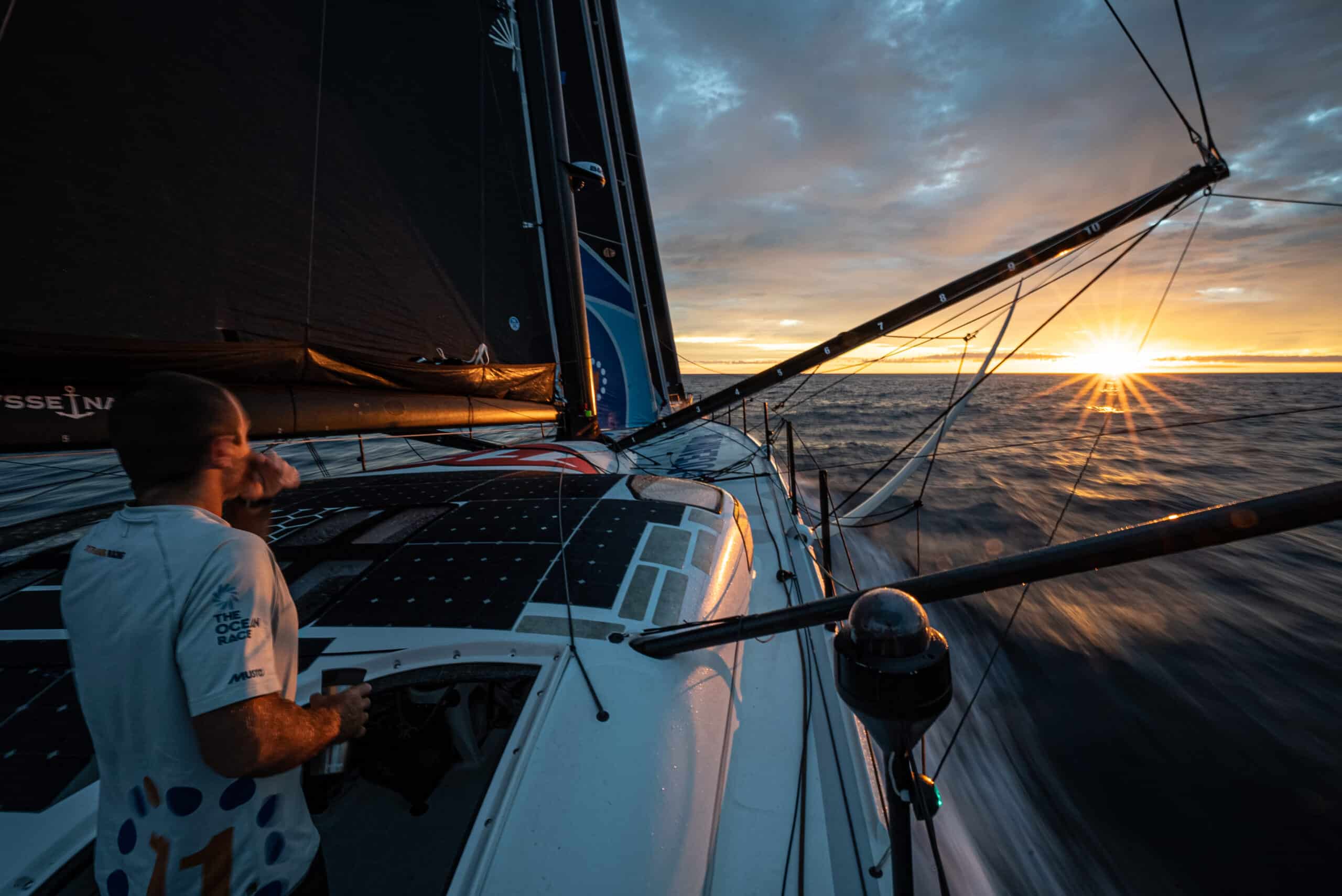 A week has passed since we returned to our French base in Concarneau, Brittany after a 3,050 nautical mile transatlantic training run from our US base in Newport, Rhode Island, and the data sets from onboard shows a new benchmark for distance covered in 24-hours by a yacht 60-foot or under.

This distance would be 20.29 nautical miles* further than the current World Sailing Speed Record Council (WSSRC) record, held by the IMOCA Hugo Boss [which 11th Hour Racing Team went on to own and race as Alaka’i], skippered by Alex Thomson with a crew of four, who covered 539.71 nautical miles**, at an average speed of 22.49 knots*** in 2018.

The Team did submit its data to the WSSRC on arrival in Concarneau, but the Council is unable to ratify the data as the team didn’t notify the Council of a record attempt before setting off from the USA.

Skipper Charlie Enright’s (USA) crew for the crossing on the Team’s sixty foot IMOCA race boat, Mālama, were Simon Fisher (GBR), Francesca Clapcich (ITA), Jack Bouttell (GBR/AUS), and media crew member, Amory Ross (USA).  The five-strong crew completed the entire crossing in 7 days, 13 hours and 15 minutes, one of the fastest sailboat crossings of the world’s second largest ocean they’ve experienced. Between them they have 56 transatlantics under their belts.

“That was my sixteenth transatlantic crossing and the fastest one to date,” commented Enright. “We didn’t leave Newport with an eye on the weather systems and weren’t pushing for any kind of record, but the numbers kept on creeping up. We had perfect wind conditions with an average of 20 knots of breeze and a cooperative sea state. Mālama just flew, and although it made living conditions onboard very uncomfortable with the slamming, it was great to see her like this in action.

“We weren’t chasing a record, and didn’t set out expecting to achieve one, but I believe this boat is something special. It’s a real testament to everyone’s hard work – the designers, boat builders, and our shore team, and shows that a sustainable approach to the build of a boat can work hand in hand with on-the-water performance. I am sure this distance will be surpassed a number of times during The Ocean Race, but to see what can be achieved with Mālama without chasing a record of any sorts is of course a small boost of confidence five months out from the start of the Race,” Enright concluded.

The sailing team remained in Concarneau for a few days of debrief, data analysis and coaching before Mālama headed into the build shed for a three week refit, ready to sail again in early September. The Team is currently planning on entering the Défi Azimut, a multi-day regatta based out of Lorient, France, from September 15-18, that will pit the four announced entries into The Ocean Race 2022-23 against each other for the first time, and in a fully crewed set-up.

The Défi Azimut has opened its startline to crewed IMOCAs for the first time in the history of the event. The unique mixed-format regatta includes timed speed runs, a 48-hour race and a dash around the Île de Groix – a sprint off the coast of Lorient.

The current plan for the rest of the year will see the Team remain in France, where they will take on new sails and foils, and with blocks of training with Pôle Finisterre, the world renowned training school for offshore sailing.

Mark Towill, CEO of 11th Hour Racing Team commented, “This Transat has been the culmination of two months of activity with our 11th Hour Racing family in Newport, Rhode Island. We celebrated #OceanHourWeek with schools and community groups learning about our impact on ocean health, were joined by over 1,000 people for the global premier of Under the Hull, the feature film focused on the Team in the run up to last year’s Transat Jacques Vabre, and also had an incredible four days sailing in Narragansett Bay joined by young adults from local sailing clubs across the Bay. It’s been great to spend time within the wider organization but for now, it is head-down for the shore crew to get the boat prepared for a busy Fall of training and racing.”

11th Hour Racing Team is one of four IMOCA teams currently announced to take part in The Ocean Race 2022-23, billed as the world’s longest and toughest sporting event. The Race will leave Alicante, Spain on January 15, 2023 and the teams will race West around the world, stopping in seven locations including Newport, Rhode Island, in May 2023, the Race’s only North American stopover.