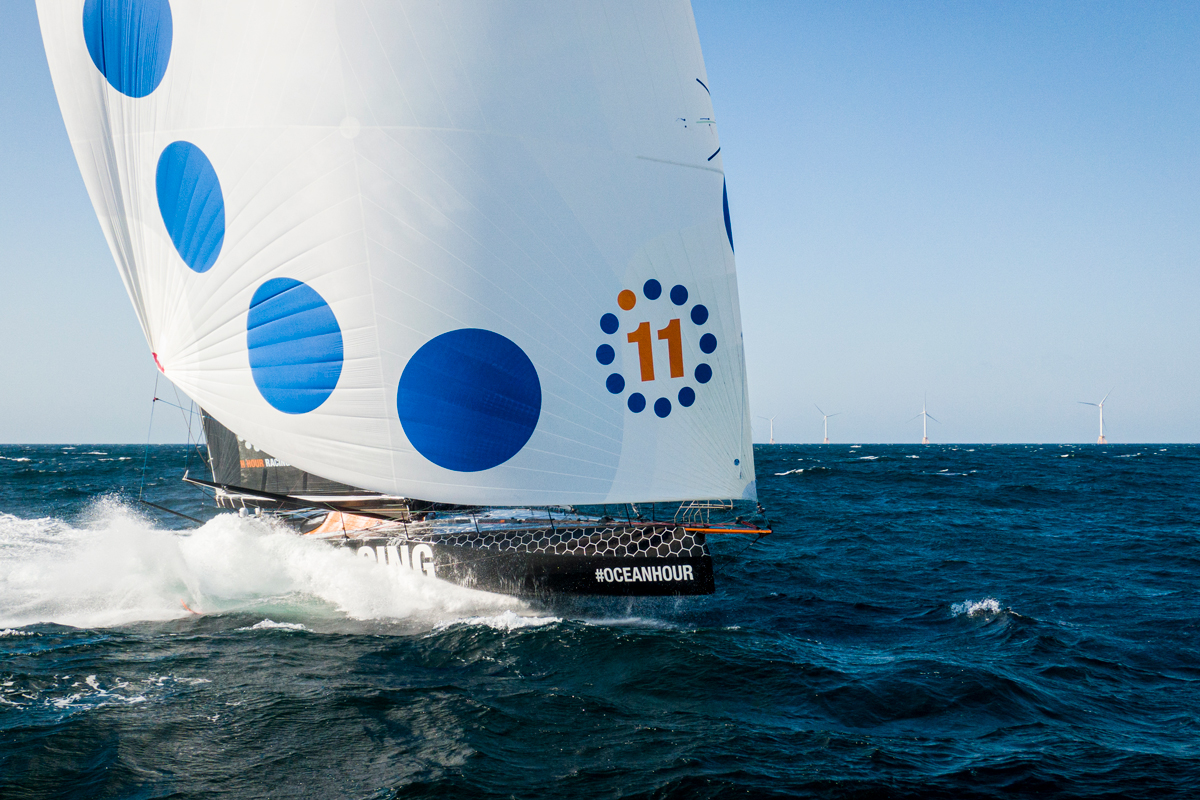 After seven weeks of training in Newport, Rhode Island, 11th Hour Racing Team has unveiled its winter 2020 plans, starting with a Transatlantic crossing from the USA to Concarneau, France, at the end of October. The team sailed the reverse trip at the beginning of August 2020, bringing the boat to the USA for the first time.

The 11th Hour Racing Team IMOCA 60 (the former Hugo Boss 6 which came second in the 2016 Vendée Globe) will undergo a winter refit before the crew reconvenes in Europe in early 2021 for more training.

“Our standby window for departure will start on October 26 and we’ll be looking for weather conditions that aren’t too extreme. It’s getting late in the year and the weather is stronger and starting to move faster,” said crew member Simon Fisher (GBR). “The objective of this transatlantic is to get as much data as possible on the boat and foil and so we want the right conditions for testing – fast sailing and downwind – which we should have the whole way across.”

Joining skipper Charlie Enright (USA), Simon Fisher, Rob Greenhalgh (GBR), Kyle Langford (AUS) and media crew member Amory Ross (USA) for the Atlantic crossing will be Swiss offshore sailor, Justine Mettraux (SUI). Mettraux has spent the past seven years competing at the very top of offshore sailing, despite starting her sailing career on the lakes of landlocked Switzerland. She came second in the Mini Transat in 2013 and raced for four seasons in the Figaro solo offshore circuit. Mettraux has previous experience in The Ocean Race having sailed two legs onboard Dongfeng Race Team, the overall winner of the 2017-18 edition and on Team SCA in the 2014-15 race.

11th Hour Racing Team have been busy since arriving in Newport, Rhode Island in mid-August, each week a mix of simulator work testing theoretical foil configurations, day sailing and overnight offshore sessions. “It’s been great to be in our home port of Newport, and the home of our sponsor 11th Hour Racing, for the past few months,” said Enright. “The welcome we receive from the residents is always so warm, which was really evident at the Homecoming put on for us in early September.

“2021 is going to have a full-on schedule with a combination of training and racing around Europe, continuing our learning in fully-foiling IMOCA 60s. In June our new boat will come out of the shed after 18 months of design and build, so we will have a commissioning period and then we’ll be putting everything we have learned to the test.”

Brittany, France was a strong choice for a winter base for the Team as it is the heart of the French dominated offshore sailing world and where the new 11th Hour Racing Team IMOCA 60 is being designed and built.

MerConcept, spearheaded by François Gabart, has been responsible for the performance and technology of the new boat, which is being designed by Guillaume Verdier and his extended studio, and under construction at CDK Technologies.

Being in Europe also allows the Team the opportunity to take part in some of the French-run IMOCA 60 racing next year, including the Défi Azimut in September 2021, and the Transat Jacques Vabre double-handed race to Brazil in October, as well as the RORC organized Rolex Fastnet Race in August which will finish for the first time in Cherbourg, France.

“France is the home of offshore yacht racing and so to be immersing ourselves in the culture, amongst the world’s experts, and to be racing alongside the very best teams, is the perfect opportunity to continue our fast-track introduction to this new Class,” commented Enright.

“Our current outlook is to be sailing and racing in our new IMOCA next summer and we are having conversations with teams about the sale or charter of HB 6: she’s a highly competitive IMOCA 60 with a really strong track record in international races. We’ve made some significant modifications and improvements including new foils and cases and the work this winter will ensure she is IMOCA Class compliant. HB 6 has great potential for a team looking to enter The Ocean Race 2022-23,” Enright concluded.