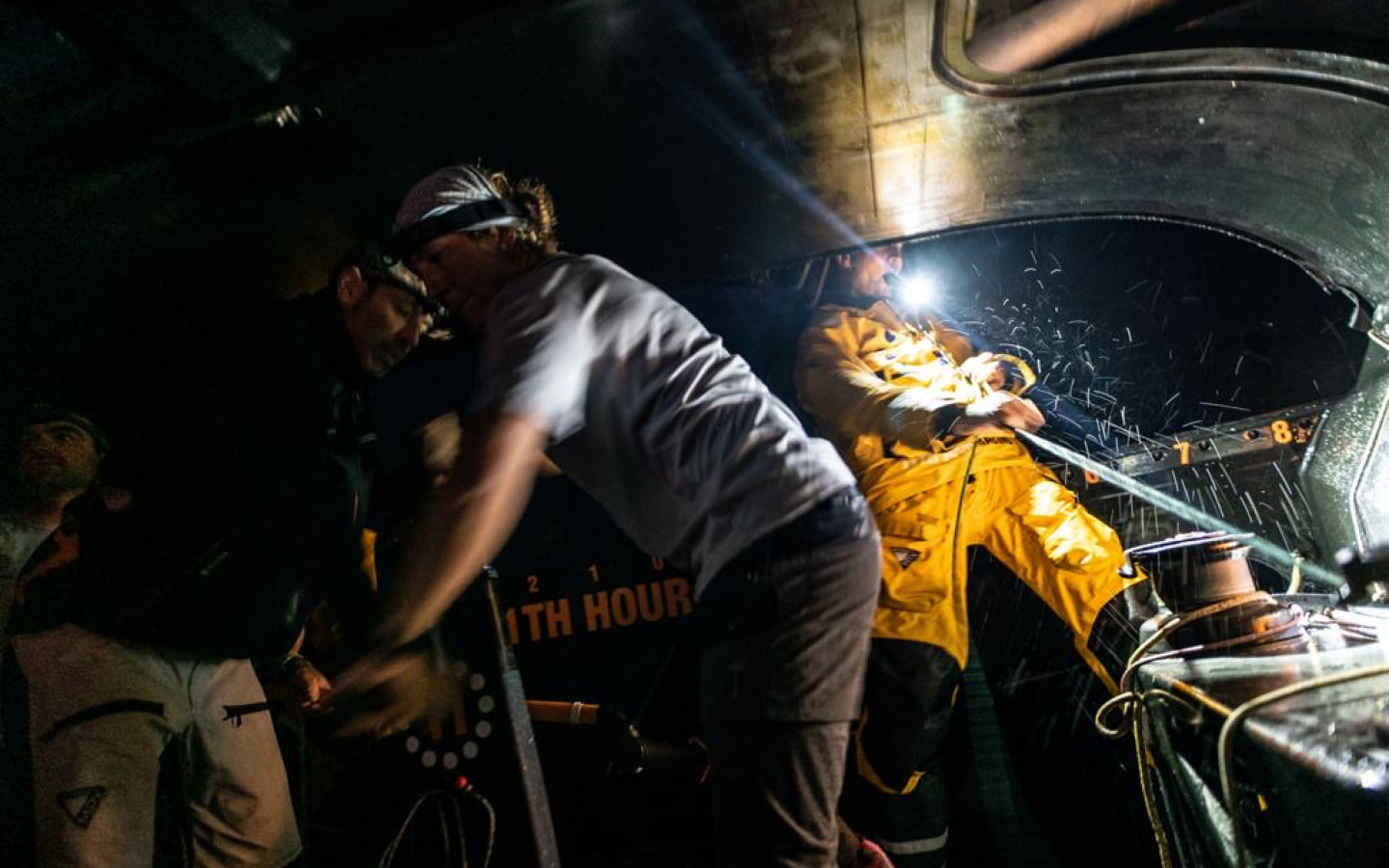 Onboard update from Amory on day 6 of their Atlantic crossing from Brittany, France to Newport, RI.

I rolled out of the bunk this morning after another failed attempt at sleep, feeling like I had gone ten rounds with Muhammad Ali. Sharing that perspective in the cockpit a minute later Kyle sarcastically returned “only ten??” It has been a punchy first week in the Atlantic…

These are our first miles on the new foil and unanimous opinion is that it’s some next-level kit. When it’s actively lifting, polar percentages have averaged as high as 150%, with some occasional spikes to 175%. That means we are sailing the boat 50-75% faster than its designed speeds on the previous V1 foils. This upgrade produces some exhilarating and, to be totally honest, somewhat terrifying performance!

The first cold front we encountered brought steady 25-35 knot winds and moderate seas. In a fast upwind mode we were averaging well in excess of 20 knots, but it felt like when we were maybe pushing the limits. I had wondered what it would feel like to foil across the ocean at night and we were doing it and my first thoughts were – “I’m not sure I want to be doing it!” Spending more time in the air than on the water we throttled back a bit and chalked it up to some good data collection before taking stock of what onboard broke free. The list was a bit long. Sorry, Irish!

With little time to spare we prepared ourselves for the second front. This one was equally as potent but we were dead upwind into a far more confused sea state. Another rough night of thrashing and bashing and bunk levitation behind us, we came out the other side this morning to a beautiful sunny ridge of high pressure and spirits are high. Today has been beautiful and the cabin roof is open. Easy to be reminded of how special sailing across oceans can be – especially now that we can again see it!

With both fronts behind us we can focus a bit on the other objectives of this trip to Newport. First up is a NOAA weather buoy deployment. We’ve been given a drifter buoy to drop at a designated region and tomorrow we heave it over the side. There are over 1200 of these bad b(u)oys slowly meandering around the world’s oceans. Due to Covid, there has been less Atlantic traffic and consequently less buoys being dropped and data being collected. We’re happy to help lend a hand knowing it directly benefits the Atlantic/European weather models for mariners like us who need and use regularly and helps scientists understand the effects of climate change on ocean health with measurement data on sea surface temperature and barometric pressure.

Hope everyone is having a great week. From the middle of the Atlantic, halfway home,