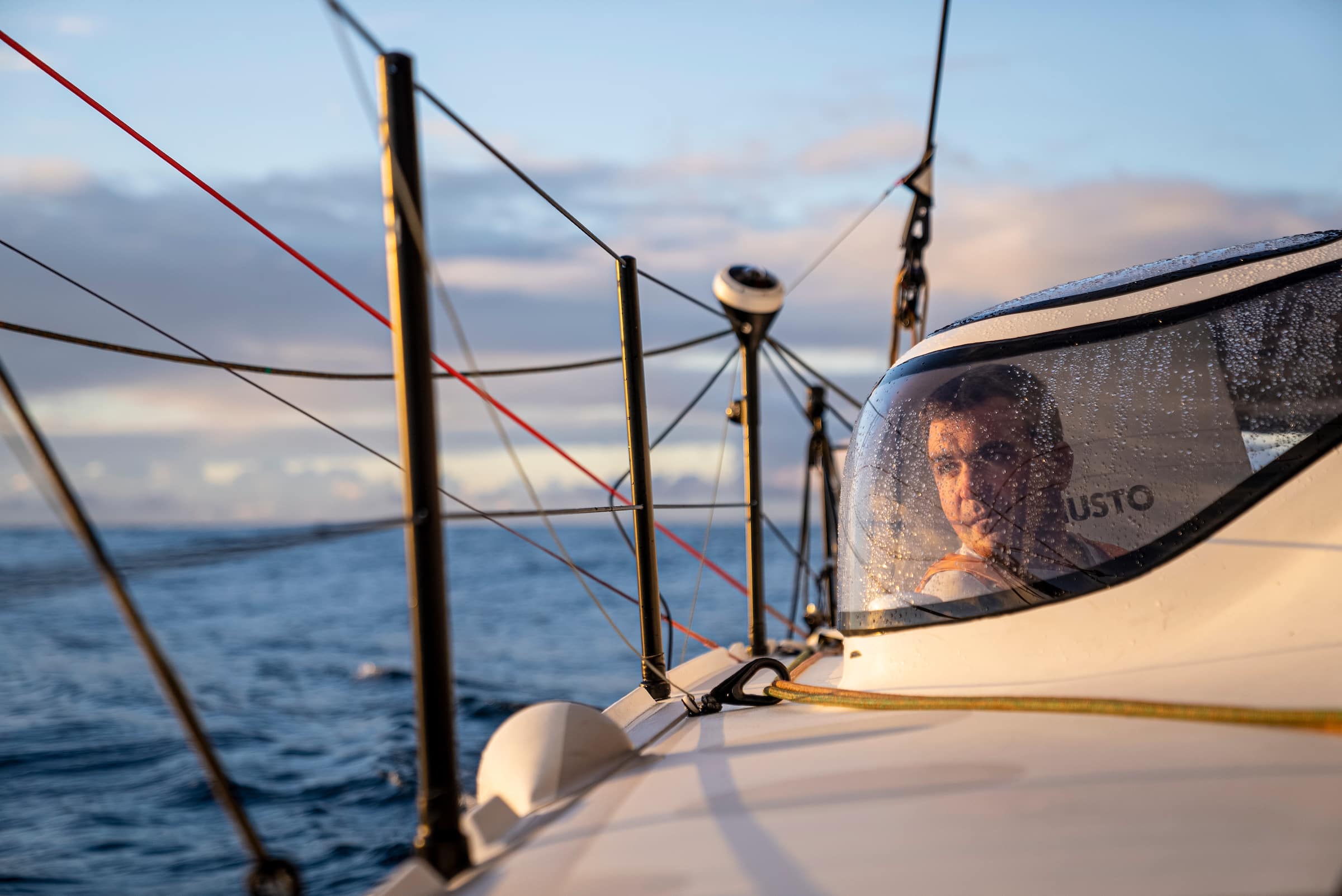 With exactly 24 hours to go to the start of his third Ocean Race, and second one as a skipper, we caught up with Charlie Enright to hear what his final few hours before the start.

This is your third race, and the only US entries, and only two American sailors in the fleet – yourself and Amory Ross – how does this feel, and why aren’t there more US sailors on the start line?

American sailors have a history with this race. When you look at the trophy, there’s a couple of big names on there in Paul Cayard and John Kostecki. But, they didn’t do the race with American sponsors. I think we’re in a very unique position, where I am an American skipper, we have an American sponsor and the race goes to the place that not only I, but our sponsor, is located. So it’s an amazing opportunity and one that we don’t take lightly.

Why aren’t there more American sailors? It’s tough. Sailing is going in an interesting way where there are less and less people onboard the boats, which in some way means fewer and fewer opportunities. You see that in the America’s Cup, in The Ocean Race. In SailGP there’s only three or four people in a boat.

So where do these opportunities come from? And then you look at the French model where it’s, it’s so clear, there’s 100 Mini Transat entries, there’s a gaggle of Figaros, they’re turning away Class 40s. So it should come as no surprise that it’s a French-dominated thing today, what I think with The Ocean Race IMOCA marriage, I don’t want to say hopefully that’s going in a different direction. But hopefully the I in IMOCA actually means International. You know from here moving forward.

Cast your mind back to when the campaign was launched in September 2019. And you’re here today, what’s your feeling about the last three and a half years?

Is it ever going to happen?

This campaign has been centered around The Ocean Race, for sure. But one of the great things about The Ocean Race choosing the IMOCA is that there’s so much else to do with that platform, that during the lead-up, we were never bored, we were never twiddling our thumbs waiting for this event to start.

I mean two Transat Jacques Vabres, three Défi Azimuts, Pôle Finisterre sessions every second week for the entirety of the sailing season in Brittany, shed time, modifications – had we had less time, I don’t know how we would have done it, that’s the feeling. You always use the time and the resources that you have available to you. so it’s no surprise that we’ve been as busy as we’ve been.

I think we’re in a good position as a team. We feel prepared. We want to start strong. I think that in some ways, that’s a bit of a throwaway statement, because I think if we just go out there and be ourselves and do what we’ve had confidence in, and have developed over the lead-up, we should be in a pretty strong spot. That said, it’s one thing to be the boat that’s sailing the best at the beginning of the race, it’s another thing to be the boat sailing the best at the end of the race and being the boat that’s most improved over the course of the race. So those continue to be goals as well. We’re going to be trying not to take a lot of risk, not only with the boat but with the fleet. Use it for the learning opportunity that it presents. And continue to have confidence in the things we know, but not be afraid to learn from some of the things that we’ve had questions about along the way.

You’ve gathered a really international crew on board, but also an international team shoreside as well in all departments. Was that intentional? And if so, why was that important?

Our team onboard and ashore is quite international in nature. It wasn’t a very conscious decision, I would say, other than to say we welcome people from all backgrounds to bring different perspectives. To make sure that no stone is left unturned. We think that inherently this race is a blend of multiple cultures so to get representation from everywhere seemed like a pretty wise and natural thing to do.

As skipper, as leader of the team, just does that put added pressure on you? Do you feel the weight of the role?

I certainly feel pressure, but where it comes from, I don’t know. I probably put more on myself than I accept from other parties. The safety of the crew is the most important thing that I think about everyday all day.

It was really interesting to hear the other skippers at the press conference talk about the difference for them when it comes to single-handed sailing versus crewed sailing. Single-handed sailing you’re just in charge of yourself, and now these guys are going to be in charge of other people. That was a dynamic I never really thought about, them having to go through, and it’s unique for me because I’ve been doing it for so long, but that’s just what being a skipper means to me. Sure, I’m the one that ultimately makes the tactical call whether we go left, whether we go right, whether we push, or we throttle back, but when you talk about people. I mean, that’s the most important part. And that’s something that when you come from a single-handed background, maybe you don’t feel the gravity of that kind of work. I’d never really thought of that, but multiple people mentioned it yesterday.

In this campaign, we’ve had this strong ocean health message. Share a little bit about what you think the real successes are so far today, and what the legacy is, and where you see that going in the future.

A lot of the influence that we’ve had on our suppliers, the relationships we’ve established with our legacy grantees, the work that we’ve done with the life cycle assessment, through the calculation of all of our team’s operations. I mean, sustainability is present in every decision we make as a team. Which I’m proud of. The data that we’re collecting onboard, the fact that we’re carrying drifter buoys. Our sustainable practices are now footprints all over this race, and you see it now permeating through other teams, which is pretty cool.

Turn to life onboard. Do you take a luxury item with you?

No. My phone. It’s only a luxury because I got pictures of my kids.

No. Not this time.

Well done. We’re proud of you. When is the biggest pressure when you are leaving on a leg. Is it the first 24 hours? The first 12 hours? The startline?

It variest, every leg is different. In this leg, getting this last transition right off Cabo de Gata. It’s gonna be just gonna be the shit everyone sees on TV, the little loop and there will probably be a couple resets, and you’ll have to get the last one right because not a lot of opportunities after that. So, 30 hours in to the race and we are going to need to be on our game for sure.

That said, it’s a transition into what could be a rich-get-richer environment, but the rich can’t get too greedy, or the rig could fall down. We’ve got three-meter seas and thirty-plus knot winds on day two or three of what’s going to be a six-month experience. But you’d definitely feel better leading into it than you would watching everybody sail away.

It’s difficult to say. We really try to live day by day. You can look at a weather forecast. but the resolution of that too many days out could be completely irrelevant, right? So we try to stick to our processes and try to … I don’t want to say take the thinking out of it, but make it as simple as possible, one decision to the next.

Weigh the risk, weigh the reward. You get some right, you get some wrong. Don’t celebrate the ones that you get right too much, and don’t dwell on the ones that got wrong too much. And there’s the tactical aspect, which I’m not terribly worried about. It’s the when to push and when not to push, taking care of the boat, taking care of the rig. There’s 20 points available between now and Brazil, and there’s 25 points available from Brazil to the finish. To be eligible for those points, you have to get to Brazil, so there’ll be a bit of that as well.

It’s a lot to think about. I think it’s cool that I’m kind of starting to wrap my head around the Cabo Verde stopover I think it’s kind of nice to stop twice before heading into the Southern Ocean, to be able to make more adjustments, if needs be.

It’s exactly 24 hours until you start. What are you gonna do between now and then?

All the stuff I haven’t had time to do it in the last five days! A little tidy up of my apartment, trying to get back to some percentage of the people who have reached out over the last week. Eat some leftover pizza. Put my feet up. Make sure my family got home alright. Try to get some sleep, even though that’s probably hard because your mind is thinking about every little opportunity to get ahead.

For me it is very interesting, because I wasn’t around here for the first 12 days [Charlie was testing positive for Covid]. But it’s not like I had nothing to do during those 12 days. Those obligations stacked up and then it’s been pretty busy since I was released back into the wild. And then my family just left and I got 24 hours to get set, get myself ready, and I feel pretty good.