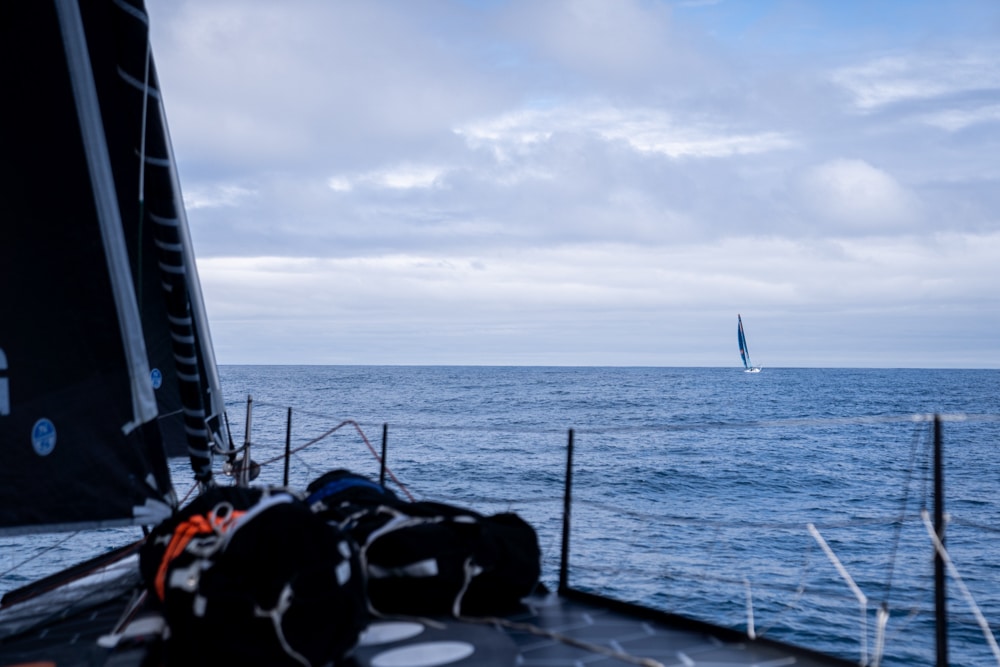 Leg 1 of The Ocean Race Europe is currently underway from Lorient, France, to Cascais, Portugal. Bookmark this link and check in regularly for updates directly from the boat and see our position on the live tracker below.

11th Hour Racing Team finished second in the first leg of The Ocean Race Europe, arriving to Cascais in the afternoon on Wednesday, June 2, less than 90 seconds behind first-placed Corum. Watch the leg recap below:

Monday, May 31: Onboard UPDATE from Amory ross

Checking in from onboard a very quiet boat! These short legs certainly promote the sprint mentality and after a relatively gentle exit out of Lorient, it has been a literal frenzy. There is some serious sleeping going on right now during this brief respite as we inch west towards the imaginary offshore waypoint.

Finisterre is one of those notorious corners of the world where you can always expect a bit of weather, and sure enough, on cue it was straight into a sharp build in wind, two sail changes, a gybe and a reef, then tearing off into the night we went, LinkedOut ahead but in sight. Everybody was psyched. We’ve done a lot of sailing as a team before, but alone. There’s nothing quite like the adrenaline-fueled chase for the lead.

Boy was it a good chase. By virtue of two completely different boats and two completely different sail concepts, we traded positions all night sailing our own best angles. Sometimes we were high and they were low, then the breeze would change, we’d both ‘peel’ to something different, then they’d be high and we’d be low. We zigged and zagged around each other all night, often very close, spying navigation lights and spray through the window while foiling along at speeds of up to 32 knots. It was breakneck and exhilarating. Nobody slept. Everything we signed up for in that one little sampling. These boats are incredible.

At daybreak the winds eased, as did our 25 knot averages. LinkedOut is well positioned below and bow out and we’ve been attempting to match their speeds all day. It has been a tremendous learning experience already, finally having someone else to line up against. Besides sleeping… we are experimenting. Small changes here and there, analyze the result. Redo. Some things work and some don’t but in general we learn something from each exercise.

An hour or two of serenity is left before we get back to the big winds. We go headfirst into a front tonight before rounding the virtual mark – now 150 nautical miles away – turning around, and overtaking it again. Lots of intensity left but also lots of opportunity. It’s great to be racing again!

CHARLIE RECOUNTS the Night as the weather did a 180 and the boat took a 360 turn:

MONDAY, May 31: ONBOARD PHOTOS FROM AMORY ROSS

11th Hour Racing Team traded places for first and second throughout the first 24 hours of racing south across the Bay of Biscay. Although the winds were unusually light, the conditions were prime for testing out our new set of foils in little-to-no wind. On shore, we were placing our bets as to when the wind would build and the Team would gybe West to start making their way to the virtual waypoint off the coast of Cape Finisterre. At the time of posting this, our crew are currently placed second, hot on the heels of Linked Out. Check out these fresh pics snapped onboard by our talented Media Crew Member Amory Ross.

Saturday, May 29: Onboard update from Charlie Enright

Charlie gives us a view from the bow of our IMOCA 60 on the first night of Leg 1 in The Ocean Race Europe. Winds are unusually light for this part of the Atlantic that is notorious for its high winds and violent sea state. No matter the desire for wanting to leave the rest of the fleet in our wake, we must admit, it’s nice to be surrounded by other boats while sailing. A welcome site after our 18-month hiatus from competitive sailing:

Leg 1 Start, Saturday, May 29: Onboard update from Amory Ross

19:33 CEST: Things are going well right now. It will be light tonight, so there will be plenty of shuffling amongst the IMOCA fleet. We’re sliding further from Corum and Team Germany, and coming up on the VO65s.

Check out the photos captured onboard during the race start off the coast of Lorient and Île de Groix:

MEET THE TEAM FOR THE OCEAN RACE EUROPE

Check out the sailing crew and shore team that are hitting the water and the road for the European tour:

Stay tuned for more daily updates as we get closer to our destination – Cascais, Portugal!