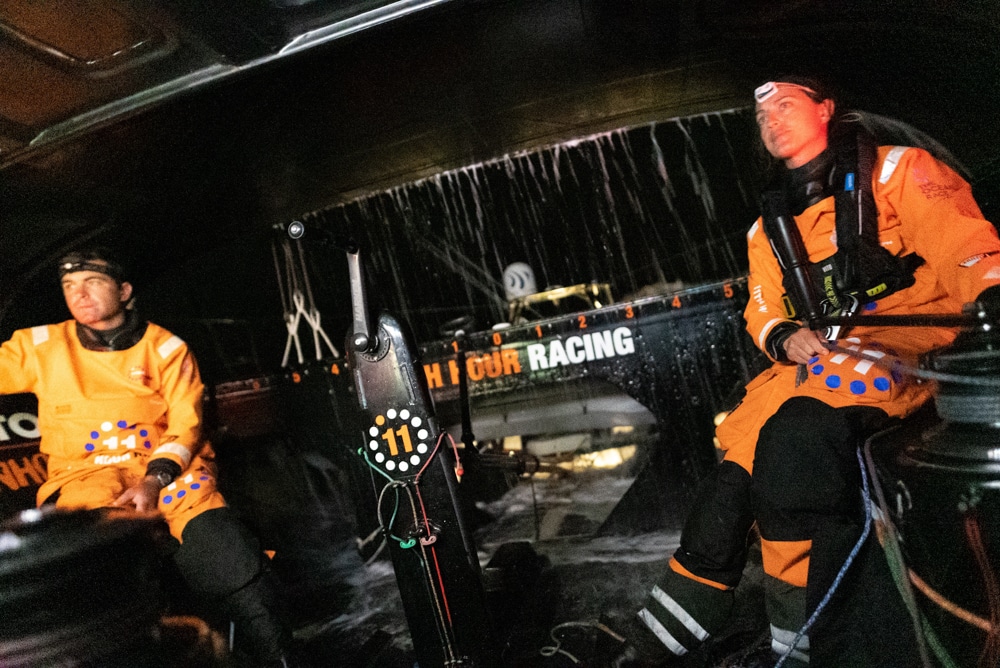 Leg 2 of The Ocean Race Europe is underway from Cascais to Alicante. Stay tuned here for your daily download from onboard 11th Hour Racing Team with updates on the race.

After starting the leg more than 70 nautical miles behind the competition our crew persevered and came back strong to catch up to the IMOCA fleet for a podium position in Leg 2 of The Ocean Race Europe.

The Team was third across the finish line in Alicante, following Offshore Team Germany in second and LinkedOut in first. Although tied for in points with the same teams for the overall leaderboard for The Ocean Race Europe, we currently sit third overall based on the Leg 2 results. The pressure is ON for the final leg and the coastal race in Genoa for the overall win!

At the finish Charlie had this to say about our the crew and playing catch-up during the race: “Although, not our best result, it was probably the best leg we’ve sailed. The chemistry onboard was amazing, it really was. The team is very resilient and determined. We were sailing by ourselves down the Portuguese Coast sailing as hard as we would have been if there were boats right next to us. It’s a great group and we’re really very lucky to have this Team, and to date, the results speak for themselves.”

The final few hours of Leg 2 of The Ocean Race Europe and it’s a straight line to Alicante, ETA 1800-1900 CEST. It’s an inshore race now and boat speed is the only opportunity to overhaul Bureau Vallée and Offshore Team Germany. It’s incredibly light – just 4 knots of breeze and as the team sails closer to the shoreline, it could get worse. Being the most ‘offshore’ boat for now, could be of benefit … Watch this space ….

For 11th Hour Racing Team, every day is World Ocean Day. In an effort to protect the place we love the most, we make sure to educate ourselves on the aquatic environments and marine wildlife in the waters we sail – whether for a race, an ocean crossing, a recreational sail. For this World Ocean Day, explore what’s below the surface of The Ocean Race Europe Leg 2 racecourse with Amory Ross.

Tonight it is all about chipping away. Chipping away at the boat in front and chipping away at the lead. LinkedOut has maintained its place at the head of the fleet in this Leg and is 19nm ahead of us in fifth place, with just three miles separating us from Corum D’Épargne in second. The crew are currently 26nm east of Cabo de Gata with Cabo de Palos – the next feature on the racecourse, next to tick off as they head in to Alicante.

There is a small split in the chasing IMOCA pack with Corum heading straight in to the coast, while Bureau Vallée, Offshore Team Germany and 11th Hour Racing Team are all looking to stay more offshore out to the east, for now.

Justin Shaffer shared what is coming up for the crew. “The team will look to tack to lay Cabo de Palos and then it will be in from there. Tomorrow, it is looking progressively faster with 7-9 knots forecast, which are decent conditions for us to sail in and will make a big difference to boat speed. ”

To celebrate World Oceans Day, Amory Ross has just sent back a report from onboard about the wildlife he’s been learning about in the Med. Check out our social channels in the coming hours to hear more and see the dolphins accompanying the team as they sailed in the Med this morning.

It was a good sight on the tracker this morning to see 11th Hour Racing Team had caught up with the trailing pack of IMOCA 60s having made more progress through the western Mediterranean overnight than was forecast. The team is currently 19nm behind leader LinkedOut, and on the tails of Corum L’Épargne and Bureau Vallée.

The shore crew are on their way to Alicante and Justin Shaffer had this update on the routing and conditions ahead. “The next feature on the racecourse is Cabo de Gata, and the guys will be there early this evening. Good acceleration and a right shift at the corner creates some opportunity for some leverage across the course. The IMOCA fleet looks as of now all too far to the west to make it in one tack, so might have some more opportunity for some gains. After that likely headed east and looking for potentially one tack and in to Alicante, offshore upwind/close reaching on port to the east in the subsiding gradient, and then north in very light thermal weds afternoon. All in all, not bad conditions for our one foil configuration.

“We have caught up to the fleet which is a huge achievement and we are now in the same weather system as them, which is great. Longer term, tomorrow the gradient breeze shuts off. Heading to the north, the big decision then will be about how close or far to be from the shoreline we need to be for the last bit in to Alicante …. Time will tell.“

Likely finish for the team is late Wednesday night, or early Thursday morning.

The Team is through the Gibraltar Straits, having chosen the northern side for simplicity and simple geometry. We felt it lined up better with our desired trajectory out of the Strait to the northeast. We crossed the straits a few times before committing to our northerly route above the TSS. Although it was windy and upwind, with a steady 30 knots building to 40 knots at the edges, all the maneuvers were really good and we’ve been pushing hard knowing the rest of the fleet is slowing down in front of us.

“The conditions are easing up now, we’ve shaken both reefs and had quite a few sail changes. We’re settling into some freeze-dried food and a quiet night after a pretty exhausting day. It’s the first time we’re out of foul weather gear since we left Cascais.” – Amory Ross

First photos are off the boat from Amory Ross as the Team get settled back into racing. The crew have done a great job narrowing the gap to the Leg leader LinkedOut to just under 40 nautical miles. Through the night we were able to sail less miles, taking a more straight-line route from Cabo San Vincente towards the Strait of Gibraltar.

Now, Navigator Simon Fisher must decide how far south to go before navigating our way around the Traffic Separation Schemes (TSS) and the notoriously busy shipping lanes this part of the world is known is for. Gibraltar is “breathing fire” – blowing 20 knots with a volatile sea state, as the rest of the fleet tack their way through a very challenging section of the course.

Skipper Charlie Enright gives us an update from on the water on the evening of the Leg 2 start after the Team resumed racing from Cascais:

After a little over two hours on the dock, 11th Hour Racing Team is heading back out to restart Leg 2 of The Ocean Race Europe.

After sustaining damage to the port foil after an on-water incident with a motorboat, the crew returned to Cascais where the damaged foil was removed from the boat. Following discussions with the Team’s design advisors and final inspections by the shore crew, skipper Charlie Enright signaled the team’s determination to get back to racing.

Charlie Enright, commented: “Since we touched the dock, the shore team and crew have been working fast to get the foil removed and inspecting for any further damage to the boat of which there is none. We were all hugely relieved that there were no injuries on either boat.

“We have regrouped and refocused our minds on the task that is now ahead of us. Sailing with only the starboard foil and behind the rest of the fleet will be an additional challenge, but one that we are all determined to face head on. We are looking forward to getting back out to restart Leg 2 of The Ocean Race Europe.”

11th Hour Racing Team returned to the dock in Cascais, Portugal, soon after the start of Leg 2 of The Ocean Race Europe, following an incident on the water with a motorboat.

Approximately two miles from the start, as the Team headed to the first mark in 12-15 knots of wind, they caught the anchorline of a small motorboat with their port foil. Race Management confirmed no one was injured on the motorboat and the team immediately sent a RIB alongside to ensure its safe return back to port, which it did unassisted.

There were also no injuries onboard the 11th Hour Racing Team IMOCA 60. There is damage to the port foil and the shore crew are currently assessing the extent of the impact. Racing in The Ocean Race Europe is currently suspended for the Team while it liaises with its designers and boat builders.

“We take full responsibility for what happened today on the water,” commented skipper Charlie Enright. “I’m extremely relieved there were no injuries on either boat. The shore crew are currently reviewing the damage to the foil and we are in touch with our designers and boat builders. We’ll make a decision on whether we can get back in The Ocean Race Europe in due course.”

Following an incident with a motorboat approximately 15 minutes after the start of Leg 2 of The Ocean Race Europe, 11th Hour Racing Team’s IMOCA 60 is returning to port in Cascais.

We sent a Team support RIB alongside the motorboat to make contact with those onboard.