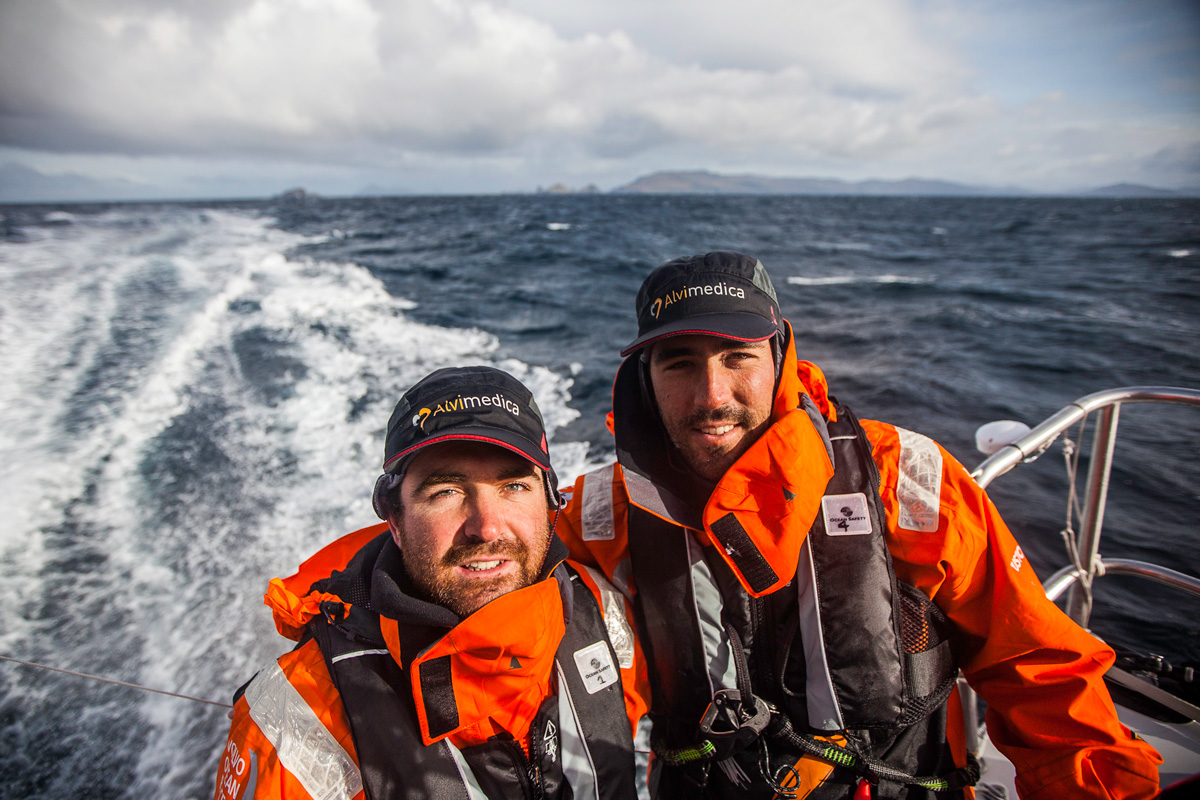 11th Hour Racing Team co-leader Charlie Enright, two-time veteran of The Ocean Race as Skipper of Alvimedica in 2014-15 and Skipper of Team Vestas 11th Hour Racing in 2017-18, shares his favorite epic moments from sailing around the world. Needless to say, he’s ready to get back out on the water to continue training for round three!

We won the Alicante In-Port Race (the first of the series before the start of the race).  This put us on the map. It gave us the confidence to compete and made us feel like we belonged. We hadn’t trained for in-ports at all during the summer leading up to the start, but we made it a priority once we arrived in Alicante. Wining showed that when we committed to something we were able to perform. It was our first time on the main stage, and to have it go so well…was exhilarating. It really broke the ice and took some of the pressure off of departure day.

Crossing the equator is a right of passage for all offshore sailors. You can do every big race on the planet…TransAt, TransPac, Bermuda, Fastnet, Hobart, C600…none of them cross the equator. You can sail thousands and thousands of miles and never cross the equator. You can do all of these things and never spend more than 12 nights aboard. That was our story when we started The Ocean Race 2014-15 in Alicante, Spain. We pushed off the dock knowing we were 20 plus days at sea, that’s a different feeling. Crossing the equator meant progress, halfway there, accomplishment…it meant the hazing was behind us. Shaved body hair, stinky flying fish, week-old freeze dried food. It was a great shared experience amongst teammates. This was the first time I had a feeling for how big the planet was…just another frame of reference. #oceanhour

It’s interesting to me that we can’t see land during most of our around the world sailing. This should provide us with a feeling of remoteness, but for some reason…it doesn’t. Maybe we get numb to it, maybe it feels all too familiar. What does provide this feeling of remoteness is when we come within sight of isolated, uninhabited islands. On the boat, we’re always moving; coming from somewhere and headed somewhere else. If we were to end up on one of these islands, that’s when we’d experience real isolation and remoteness. The first time I thought about this was sailing from Sanya to Auckland in the 2014-15 race. We saw some absolutely spectacular islands and atolls in the South Pacific. I remember feeling lucky and appreciative. Only a small percentage of mankind gets to lay eyes on these sights and for us to be able to do it while competing in the race of our dreams, is nothing short of euphoric.

Cape Horn is the Mt. Everest of sailing. More people have climbed Everest than have rounded Cape Horn on a sailboat. Cape Horn represents accomplishment, and reprieve. It signifies the completion of the Southern Ocean portion of the leg. For Mark and I it meant more than all of that, it was the culmination of 5 years of hard work. Putting yourself in a position to sail around Cape Horn as part of the Ocean Race, is arguably harder than actually sailing around it. The trepidation we felt before setting out on this leg was magnified because of a Cyclone postponement. On top of that we were first in the fleet to reach the iconic Cape, an accomplishment usually reserved for experience was taken by a keen group of young up-and-comers…a pretty special moment that can never be taken away, and what a picture.

Coming into Newport during the 2017-18 race was one of the most memorable moments of my Volvo (The Ocean Race) career. It was a timed run to the start line in Brazil after our South Ocean dismasting, we had just enough time to shakedown the boat before pushing off the dock. We sailed a podium worthy leg and things were looking good until a frontal Gulf Stream crossing 100 miles from the finish. We were hard running in 40+ knots as the wind shifted through 90 degrees with the front. The gnarly sea state, along with thunder and lightning, made for difficult driving conditions and a tough frame of reference. 24 hours later the fleet found itself becalmed, in the fog, at the mouth of Narragansett Bay. We were sitting in 4th, with the anchor built on the bow, scared of uncontrollably drifting into the Jamestown shore. Using a bit of local knowledge, we slipped by one of our competitors and sealed the podium finish we deserved, not how we envisioned getting it, but hey. I was met by my wife and two kids at 5:30 AM at Fort Adams State Park…they were accompanied by thousands of fans and spectator boats. It felt like a real homecoming.