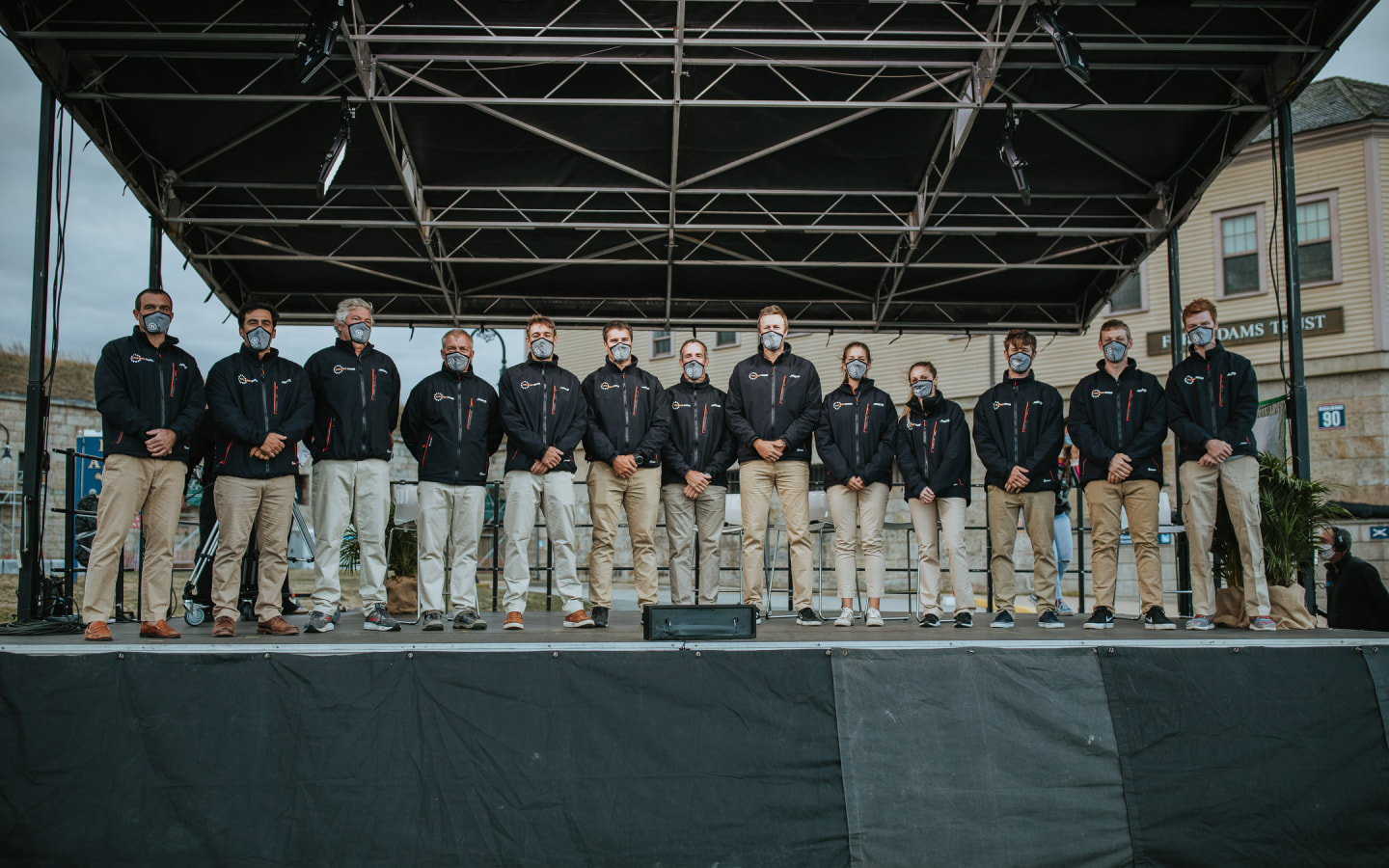 Three new sailing crew have been signed by 11th Hour Racing Team, the US-based offshore sailing team with a sight set on winning The Ocean Race 2022-23.

In a socially distanced ‘Homecoming’ event at Fort Adams, the location of The Ocean Race’s only North American stopover, Great Britain’s Simon Fisher and Rob Greenhalgh, and Australia’s Kyle Langford were confirmed as the latest crew members to join skipper Charlie Enright and CEO Mark Towill. For previous winners Fisher and Greenhalgh it will be their sixth consecutive Ocean Race, while for Langford it will be his second lap around the planet.

“Thanks to the early support we have from our title sponsor 11th Hour Racing, we have a long run up to the start of The Ocean Race in 2022-23. It’s important to us that we bring in the very best talent and there aren’t many more experienced sailors than SiFi or Rob,” commented Enright. “And to have an exceptionally talented sailor like Kyle join the team is a signing we are all excited about.”

Greenhalgh, originally from Brighton on the south coast of the U.K. and now residing in Sydney, Australia, commented, “What keeps me coming back to this race is the physical and mental challenge, more now than ever, since we aren’t racing in a one-design boat. That brings a whole new dimension to the racing and one I’m really looking forward to. Everyone wants to be part of the best team and there is a big advantage of being on a team that is out there sailing early, so I jumped at the chance to join 11th Hour Racing Team.”

Greenhalgh is a five-time participant in The Ocean Race dating back to 2005-06 when he was a member of the winning ABN AMRO ONE campaign for The Netherlands. Three years later, he finished as runner-up with U.S.-flagged PUMA Ocean Racing and has since competed in three more Ocean Races, most recently in another second-place finish with Spanish entry MAPFRE.

Fisher, who won the 2014-15 edition of The Ocean Race as navigator onboard Abu Dhabi Ocean Racing, divides his time between Barcelona, Spain and the U.K.: “I’m very proud to be part of this team and motivated to win The Ocean Race again. It’s exciting to be in a position where we can challenge for a win in a new class. Mark and Charlie have put together a very strong group of sailors and shore crew and it’s great to be part of a team once again.”

Racing in an open class brings the importance of yacht design back to The Ocean Race after 10 years in one design boats. “As someone who is focused on optimizing and developing the systems on board I’m keen to demonstrate that with the technology available we don’t have to compromise performance to operate sustainably and actually it is possible to gain a performance advantage. That’s going to be my focus over the coming months and years,” added Fisher.

Langford, from Lake Macquarie, Australia, was a world champion at 21, an America’s Cup winner at 24 and competed in the last Ocean Race at 28, finishing on the podium with the Dutch entry Team Brunel. “The enjoyment of being out on the ocean with no assistance or support is a real mental and physical test which doesn’t compare with any other discipline of sailing. I’ve been very fortunate in my sailing career to travel all over the world to many countries, sailed across the oceans and witnessed firsthand the impact that humans are having on the environment. Working with marine businesses from the inside of the industry, sharing better practices and the small changes we can make to the way we live will go a long way to preserving our ocean and marine life. To have a voice in that, whilst racing around the world, is an absolute privilege.”

Newport hosted an official homecoming for 11th Hour Racing Team on Friday September 18, after the team crossed the Atlantic in their newly refitted IMOCA 60 departing from Concarneau, France at the start of August.

The sailing and shore crew were welcomed back to the home of their title sponsor 11th Hour Racing at newportFILM’s open air movie night in collaboration with Sail Newport, where a Q&A with TV host and science communicator Danni Washington was followed by an airing of Save This Shark. The documentary is fronted by World Surf League (WSL) three-times world champion Mick Fanning who, in 2015, became the ‘guy who punched a shark’ after an encounter watched by thousands on live TV, while competing in a WSL event in South Africa. In the documentary, Fanning, who admits he struggled with nightmares for years after the attack, shares his journey to get a better understanding of the creatures and the important role they play in the oceans’ ecosystem.

11th Hour Racing Team will be training from Newport, Rhode Island for the next few months.