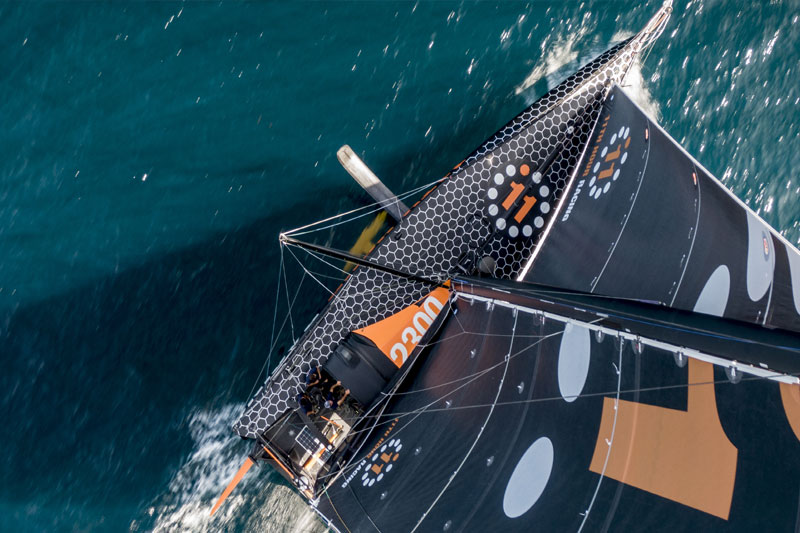 11th Hour Racing Team, led by Charlie Enright and Mark Towill, took ownership this past June of the former Hugo Boss boat previously sailed by Englishman Alex Thomson and have renamed it ‘11th Hour Racing’, after the team’s title sponsor.

The four-year-old foiling IMOCA 60 class boat is now docked in Port-la-Forêt, Brittany, France and will be used by Enright and Towill as the duo prepare for the team’s entry in the 2019 Transat Jacques Vabre in October. The two started official training in the boat the week of August 19.

Designed by VPLP/Verdier, 11th Hour Racing was first launched as Hugo Boss in 2015 as one of the most advanced racing yachts in the world. Made completely from carbon fiber and highlighted as the first-ever all-black racing yacht, it was one of the earliest IMOCAs to feature hydrofoils to reduce drag and optimize speed. The boat’s first-ever race was the 2015 Transat Jacques Vabre and the next year the yacht finished second in the solo-handed Vendee Globe with Thomson on-board.

“This is a fast boat and was so technologically-advanced when it first debuted, that it’s still among the most cutting-edge boats out there in the IMOCA class,” said Enright, who oversees all high-performance sailing aspects for the team. “It’s the ideal boat for us to get acquainted and familiar with the systems, sail program and nuances of the foiling IMOCA.”

Four years after debuting at the 2015 Transat Jacques Vabre, 11th Hour Racing yacht will make its first ocean crossing with its new look in the 2019 edition at the startline in Le Havre, France, on October 27.

Since being moved from the UK to France in late June, 11th Hour Racing has been re-fitted and re-branded with new features and a new look, highlighting its lead sponsor 11th Hour Racing. The boat’s new livery, and race number 23:00 reflects the sense of urgency around global environmental issues — the clock is ticking, we are at the 11th hour — while the #oceanhour aims at inspiring positive action among sailing and coastal communities and sports fans worldwide.

“The health of our planet depends on the health of our ocean, from the oxygen we breathe to the food we eat to the stability of our climate. With each day, we are racing together against time to accelerate change through sporting excellence in sailing, ocean advocacy, and sustainable innovation,” said Rob MacMillan, President and Co-Founder of 11th Hour Racing.

With The Ocean Race opening up its race to two classes of boats — the IMOCA 60 and VO65 —  Towill and Enright are looking forward to familiarizing themselves with the IMOCA 60 class after two races around the world in the one-design Volvo Ocean 65.

“This boat is a beast and can reach incredible speeds in all conditions,” said Towill. “We believe having the new 11th Hour Racing IMOCA in our possession now is a great first step on our path to getting to the startline with a team that can compete for and win The Ocean Race trophy in 2021.”