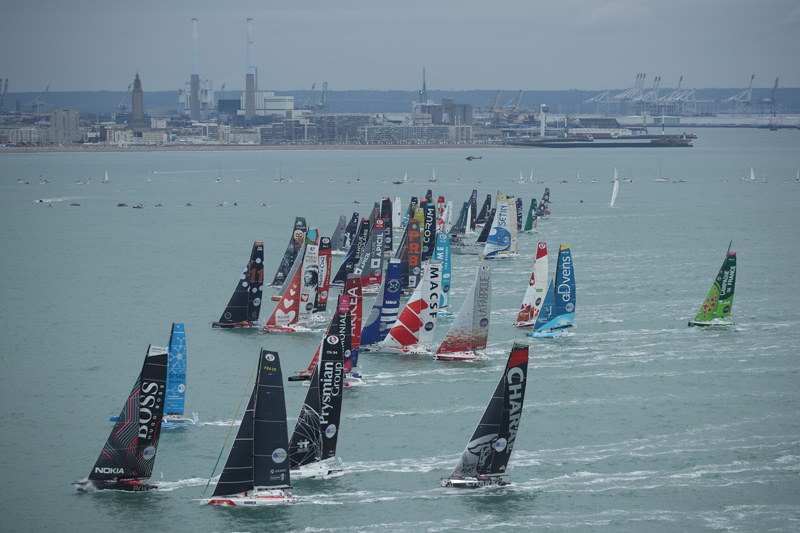 11th Hour Racing Team duo Charlie Enright and Pascal Bidégorry crossed the start line along with 58 other boats in the fleet under cloudy skies just off the coast of Le Havre, France to get the 2019 Transat Jacques Vabre underway at 1:15pm local-time Sunday.

After a busy week of briefings, appearances, media interviews and race preparations, Enright and Bidégorry were looking forward to the chance to focus solely on sailing.

“This is what it’s all about, set the sails, figure out our routing and go head to head with the best sailors in the world,” said Enright.

A record 29 IMOCA 60 class boats were at the start line, up from just 13 two years ago, as the class has very much become the preeminent boat design for offshore races. While Enright and company have made it clear that this event is just a kick-off to the team’s longer-term campaign towards The Ocean Race in 2021-2022, the competitive juices have kicked in over race week.

“This is an iconic race, one of the classics, so we are absolutely going to give this a go,” said Enright. “I’m really pleased with the preparation we’ve had during the training camps in France over the past three months and we have some great experience on our side with Pascal.”

To prepare for the Transat and get the longer-term 11th Hour Racing campaign up to speed in the IMOCA 60 class, Enright and team partner Mark Towill have taken the decision to train full time out of Brittany, the hub of offshore sailing in France.

“You have to be immersed in the IMOCA culture to learn all that you can and soak it in. And that starts here in France,” said Enright. “It’s not just for the IMOCA class. Two of the last three Ocean Race winners have come from France, so it’s where you want to be.”

And for any sailing fan, Le Havre is where you wanted to be on Sunday for the start of the 14th edition of the Transat Jacques Vabre. The fleet looked magnificent and the docks, shoreline and breakwater were filled to the brim with fans trying to catch a glimpse of the sailors – many of whom are national heroes here in sailing-mad France.

The team had a solid start and was sailing among the leaders in the fleet early on before dropping back a bit. The first official rankings released at 4pm local after several of the IMOCAs had rounded the first mark near Etretat had PRB in the lead with 11th Hour Racing in the middle of the fleet.

Enright is the only American competing in this year’s race in any of the three classes. No American sailor has won the Transat before in the IMOCA 60 class, although Connecticut-native and fellow Brown University-grad Joe Harris was victorious in the Open 50 class onboard Gryphon Solo in the 2005 Transat Jacques Vabre. Enright and Harris have sailed together before off the coast of Rhode Island.

But for Enright, the history of the moment was not of big concern, as he was mostly focused on the task at hand: “The first few days are looking like they could be really heinous. Sailing these foiling boats gives you no breaks at all. None. The slamming is non-stop, you are handling all aspects of the boat and sleep is pretty much left to however you can plunk down and catch some sleep. It’s so rough down there, we’re wondering if it’s easier to sleep in a big bean bag chair then a bunk bed.”

A big decision will come within about 24 hours after the start when Pascal and Charlie will have to decide whether to head out into the Atlantic and follow the westerly routing or to sail south and follow an easterly course along the coast, which is shorter but with upwind sailing most of the way until Portugal.The current estimates put the IMOCA 60 arrivals around November 10-12 into Salvador. Follow the team on the live tracker here.