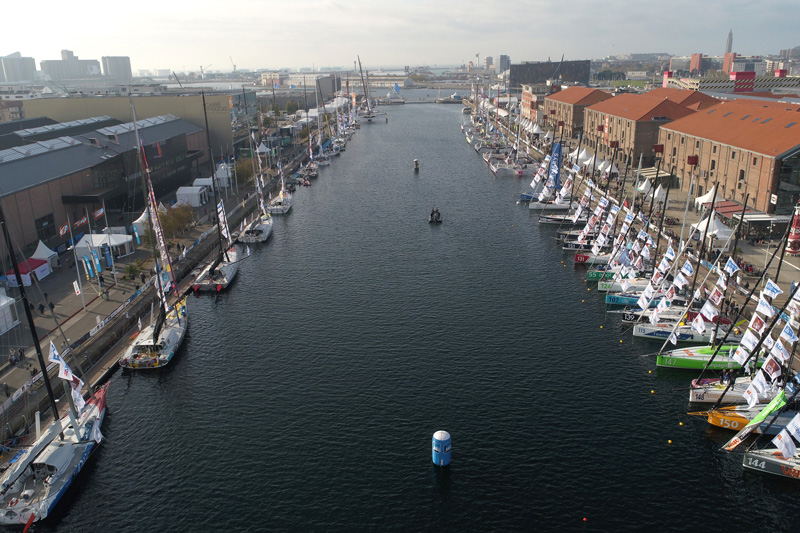 The Transat Jacques Vabre will be the first major ocean race for 11th Hour Racing. The TJV is a two-handed race that begins October 27, 2019 in Le Havre, France and finishes approximately two-weeks later, in Salvador de Bahia, Brazil.

The transatlantic race celebrates the old coffee route from the Caribbean and South America to France and was first raced in 1993 from Le Havre to Cartagena, Colombia. Since then, the race has grown into a national spectacle in France. Entries include both monohull and multi-hull classes with trophies being awarded to winners in Class 40, Multi 50, IMOCA 60 and ULTIM (70+ foot trimarans). For 2019, only the first three classes will be contested, featuring 67 boats and 134 sailors.

In the past, we’ve seen the race finish in Costa Rica and Itajai, Brazil. In 2017, the race returned to Salvador de Bahia, where we’ll see the boats finish again this year.

The race route covers 4350 miles and the fleet will cross a huge variety of weather conditions. They will experience autumnal depressions in the Bay of Biscay and the swirling high pressure cyclone winds of the Canary Islands. Sailors will face the Atlantic trade winds, the Doldrums and finish along the North Brazilian coast into the Bay of All Saints. These diverse weather patterns and systems force each team’s duo to be strategic and tactical to navigate the best possible route to Salvador.

For the first time, 11th Hour Racing is amongst the TJV entries with our IMOCA 60. The boat was purchased earlier this summer from Alex Thomson Racing and is approaching the start line for the second consecutive time. The team is training in France as a part of a series of IMOCA training camps out of Port-la-Forêt and will deliver the boat to Le Havre mid-October.

Another first, Charlie Enright is a Co-Skipper for the race. Sailing double-handed is a new challenge for Charlie, who is most experienced in leading a full crew in races like the Rolex Fastnet Race and the Volvo Ocean Race.

11th Hour Racing isn’t the only reason your eyes should be glued to the race tracker. This year the fleet will include a new generation of five IMOCA 60s that push the boundaries with redesigned foils and performance enhancements. Among the new TJV entries – the black and red Charal, Apivia – skippered by Charlie Dalin, and the recently launched Hugo Boss. You can bet the 11th Hour Racing Team will be watching the performance of this new generation closely as they look ahead to The Ocean Race 2021-22.

Transat Jacques Vabre – By The Numbers