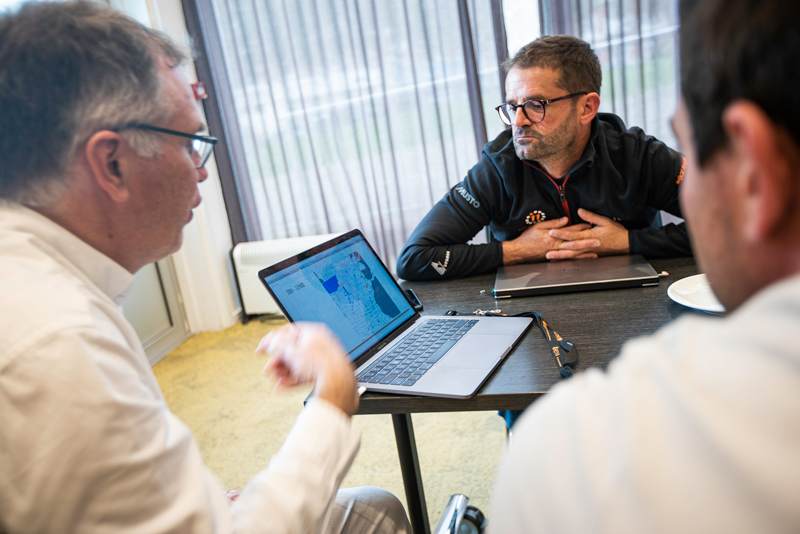 The 2019 Transat Jacques Vabre might be the first time Charlie Enright has competed in this race, but his sailing partner for the transatlantic, Frenchman Pascal Bidégorry, is a six-time participant and two-time winner.

With a voyage that follows the old “coffee route” connecting France with South America, the race covers over 4250 nautical miles and will take two weeks after Sunday’s start. It will be a tricky first-24 hours says Charlie, with a lot at stake from the get-go.

“There’s basically going to be a split in the routing. You can go west and hit some conditions that would really favor our boat, but could also break the boat. Or you can stay east, which doesn’t suit our boat as much, but has less risk. That front will come about 3-4 days in, but we’ll need to make the decision sooner, as we get around the westernmost point of Brittany leaving the Channel.”

We sat down with the two-time champ Pascal to break down the full race route as it stands after Friday’s late afternoon weather briefing with arrivals for the IMOCA 60 class currently estimated for November 10-12.

PB: “The start is going to be tricky. Not much wind. A lot of boats out there, 30 IMOCAs. We’re going to need to be careful. Within the first day we will have a big decision to make. A BIG decision – a black or white decision, do we head west or go south and stay east as we come around the westernmost point of Brittany. That’s all I’m focused on right now.”

PB: “As we go down the coast and after we leave the Channel we have to chose the west option or east option. In the middle is bad, so it’s basically max right, max left. Out towards the Atlantic we would have to fight against some lower pressure, reaching mode, then make a big turn. It would be a faster position from pretty far west and the rest of the leg would be much better. Long term you gain more. It’s pretty crazy to think that you are going 800 or 900 miles west before you even head south. It would get you thinking, is this a race to the U.S. or a race to Brazil?”

PB: “The other option is closer to the shore and you are sailing all the time upwind until south of Portugal. That’s not good conditions for our boat. We know we are not fast in this option. I’m not excited for that scenario. Then you catch the trade winds west of Casablanca (Morocco), so you have to gybe to go west to cross the doldrums.”

PB: “For the moment it’s not really something we are focused on. It’s been changing a lot. We’re playing a lot with different routing options, but really how we approach the doldrums will depend on our bigger decision earlier on. Still, this will be a tough section to get through and it can often times be a nightmare!”

PB: “Usually you are loving this part of the sailing after you get through the doldrums. It’s warm, you catch the south wind and you are happy, reaching downwind to the finish. So you have the chance to arrive at the finish with a nice speed and angle with some great sailing conditions. But you still have to find a good balance for your boat and you also have to keep an eye out for frequent thunderstorms.”

See how to watch the race start live and follow the team’s progress on the tracker.