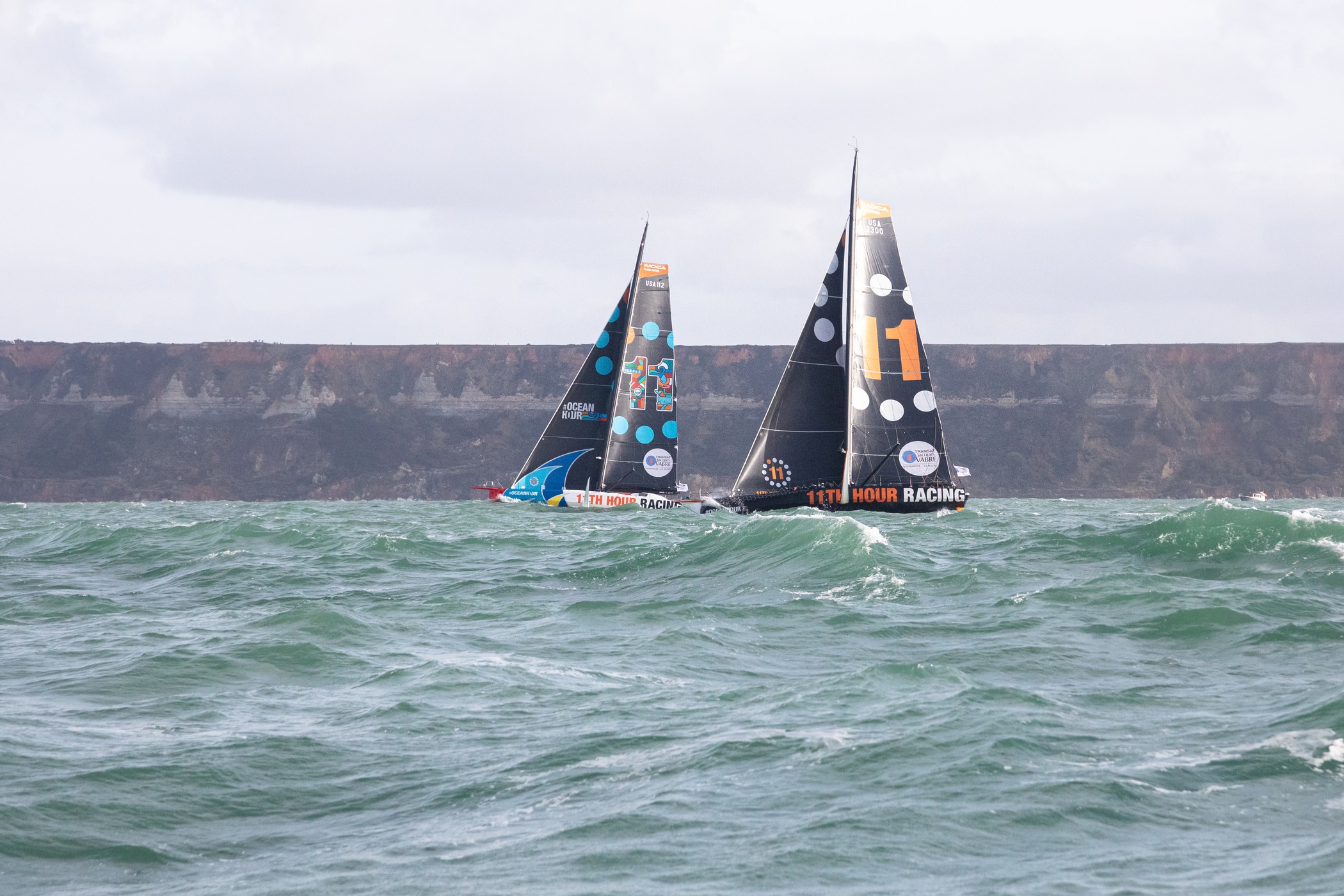 One week ago, the iconic Transat Jacques Vabre transatlantic race kicked off in Le Havre, France. 11th Hour Racing Team started with two boats competing in the IMOCA 60 class. Check out what’s happened since in our weekly wrap-up.

On November 7, exactly one week ago, at 1327 CET (1227 UTC), the fleet of 79 boats competing in the biennial Transat Jacques Vabre, the transatlantic race from Le Havre, France to Martinique in the Caribbean, crossed the startline in 18-20 knots of breeze. This was the first major offshore race of 2021 for 11th Hour Racing Team.

All eyes were focused on our two boats on the 60-foot monohull IMOCA startline. The brand new Mālama – skippered by Charlie Enright and Pascal Bidégorry – and Alaka’i, the 2015 launched boat, skippered by Justine Mettraux and Simon Fisher.  What an opening week it has been since then …

Unusually light winds, coupled with the notoriously challenging tides of the English Channel provided a headache for the navigators as they worked their way west. With the current against the fleet for the first night, they hugged the Normandy and Brittany coasts, edging their way out of the Channel.

After two days of light, patchy winds with the crews battling through currents and wind pockets, Day 3 brought little reprieve for the sailors as they tried to thread their way efficiently through the islands at Ushant off the western tip of France, unable to head offshore, and continuously thwarted by the light winds. As they turned the corner and pushed into the notoriously windy Bay of Biscay, the blustery home to the team for the year and a source of many productive training sessions, once again, no real momentum south was provided thanks to the fickle and complicated winds dominating the region.

Fisher, emailing the race organizers on the night of Day 3 as they crawled through the Bay said:

“Our only consolation was that as we drifted close to the continental shelf we were able to enjoy an ocean teeming with life.  Whales cruised by, and dolphin after dolphin played around our hull and foil as we slowly moved through the water.”

As the fleet was nearing Cape Finisterre, a much welcome increase in wind speeds met the fleet, a welcome reprieve from the light breezes that had dogged the sailors since the start.

But disaster was on the horizon. Less than 10 hours later, Alaka’i had dismasted. The 95-foot mast had fallen over the bow in 23 knots of wind [26 mph; 43 kph], and in a choppy sea state, as they raced in 7th place. Both sailors were safe and uninjured and immediately set about working on stabilizing the situation onboard.

After motoring into the nearest port at A Coruña, Mettraux said:

“Both Simon and I are really disappointed – we just didn’t imagine this would happen to us. We had a good start to the race, and were going well at the time. I am so sad to stop the race like this, especially as we have had such a good year racing together, the miles we have sailed and the experience we have gained. We are also gutted for the whole team who had helped us to prepare so well and got us to the startline last Sunday.”

With Alaka’i safely tied up to the dock in A Coruña, attention turned back to Charlie and Pascal out on the race track…

By Day 5, there had been a good deal of shaking and moving at the front of the IMOCA fleet with big differences in speeds and lots of gybes, indicating a few minor holes in the windfield and more strenuous sailing. Apivia finally relinquished their pole position at the front to LinkedOut first and then Charal second, and Mālama and Initiatives Cœur making up some ground on the leading trio further to the east. All the teams left the Madeira Archipelago to starboard, and the crew wove their way through the localized wind shadows and eddies that dominate the lee of the islands.

After a few days of considering best strategies to tackle the Canary Islands, on Saturday, the fleet transited the tricky region. Malāma had a really strong day, the lowest and fastest of the front pack, covering 450 miles in 24 hours. Closing the gap to the leaders (just 20 miles from Apivia) in the morning, Malāma got caught on the wrong side of a left shift and was the first of the top-five to have to gybe to stay west of Lanzarote. It was the first of a few gybes for them before they squeezed through the narrow passage between Fuerteventura and Gran Canaria while keeping clear of the long Traffic Separation Zone.

With just two weeks of sailing before they arrived on the startline, Enright and Bidégorry have been finding ‘gremlins’ onboard. These aren’t stowaways, more like a case of “new boat-itis” as our onboard media crew member, Amory Ross described it: small bits of work that need to be done, and the work list is mounting. As the team eased out of the Canaries on Saturday night, and can enjoy some relatively easier straight-line sailing, it will be a chance for them to catch up on the ever-mounting work list.

Messaging last night, Enright was also looking forward to a change of clothing:

“A day to dry out, strip off the thermals, enjoy the scenic island views … and to dig into the work list that’s been building since the moment we started!

“Made a couple fixes, but took some steps backwards in other areas … nonetheless, all good for learning the boat. As the sun goes down we can see the civilized lights of Grand Canaria … going to be a while before we feel civilized again, but maybe a change of underwear on the horizon? Ah, the pleasures …”

On the seventh morning at sea, Sunday November 14, the crew on Mālama were lying in 5th place, just 6 nautical mile off the Western Sahara coast at Dakhla with Initiatives Cœur 30 miles to the west. It’s a satisfactory position to be in, particularly in a new, and mostly untested boat. These light winds have been kind in many ways, allowing Enright and Bidégorry to nurse her south towards the Doldrums. What’s to come as the head towards the Cape Verde islands is anyone’s guess.