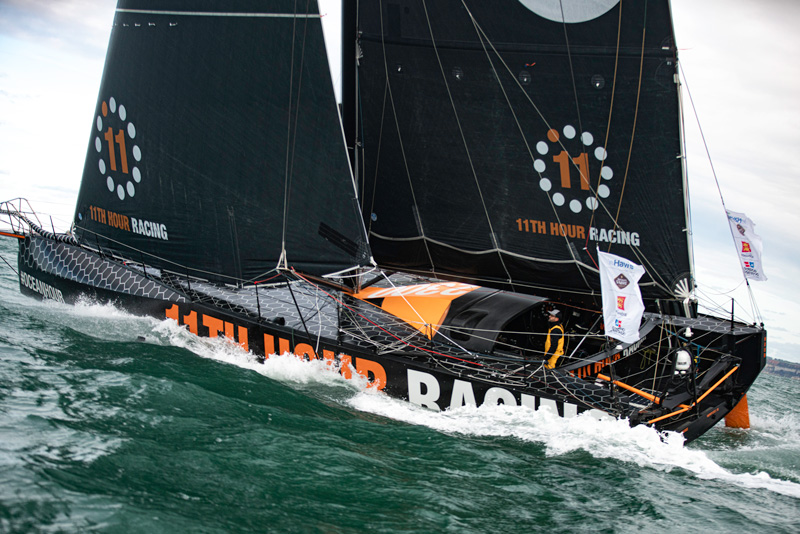 All weekend long heading up to the start of the 2019 Transat Jacques Vabre, co-skippers of 11th Hour Racing Team Charlie Enright and Pascal Bidégorry talked about the “big decision” looming as the pair exited the English Channel.

Pascal called it a “black and white” decision that would fundamentally change the race they were going to be sailing: either head west and go far into the Atlantic before pointing south towards Brazil, or turn south along the French coast sailing through the Bay of Biscay and past Cape Finisterre along Spain’s northwest corner.

It was going to be a tough decision at face value any way you cut it, but the choice was made even more complicated the past 24 hours by connectivity issues that have prevented Charlie and Pascal from downloading the latest weather forecasts.

“We have a problem with our (satellite) connection, so we don’t have much weather info but that’s life,” said Pascal speaking via phone to the Transat Jacques Vabre media center in Paris. “Charlie and I are working well together. We made some changes on the boat before the race and I think it’s much better upwind. These difficult choices of which road to take are not a surprise, but it’s more complicated without much weather info.”

That complicated “black and white” decision was made early Tuesday morning local time as 11th Hour Racing tacked south towards Spain committing to a more easterly route. The team’s position among the fleet heading south put 11th Hour Racing in third in the overall IMOCA standings by afternoon Tuesday. Meanwhile at least a half dozen of the 29-strong IMOCA fleet were taking the route west into the Atlantic, creating a split in the fleet that will be exciting to watch as it plays out.

“I’m not surprised that the fleet has taken two options. We are currently sailing upwind in 15 to 17 knots with a manageable sea state (2 to 3 meters swell),” said Pascal at 12 noon UTC Tuesday. “We have been sailing with Apivia for some time now. We have seen a few boats when rounding Ouessant; since then we overpassed Banque Populaire, we saw Apicil, PRB. Everything is well onboard with Charlie, we haven’t got any problem with the boat, and as soon as I will solve the problem with the connection, life will be much easier.”

Pascal and Charlie will now be facing northerly winds for a good part of the next two days of sailing but will have shorter sailing then those that headed west.

The boats heading west, including the new generation HUGO BOSS, Maitre Coq, and Bureau Vallée, will not make much initial progress towards the final destination of Salvador — that is until they chart their southerly course and catch some favorable trade winds and sailing angles. The move could end up paying huge dividends in 3-4 days time.

“It’s quite a complicated situation at the moment with the weather data,” said Mark Towill, 11th Hour Racing Team’s co-leader who was in Le Havre and will be en route to Brazil next week. “Since the start, the low pressure has changed and it appears that the easterly route is trending towards a more preferable route then it first was. It’s a struggle with the connectivity on board without the latest weather. We are working hard as a team to help resolve that as quickly as possible. In the meantime, they are sailing well, pushing hard, and up with the front pack which is great to see.”

After approaching Spain’s Galician coast and tacking before an exclusion zone, Charlie and Pascal will be keeping leaders Charal and second-place Apivia in their sights.

The current estimate for the IMOCA arrivals into Salvador is around November 10-12 with the equator crossing happening early next week.

Check the team’s progress on the TJV Race Tracker here.