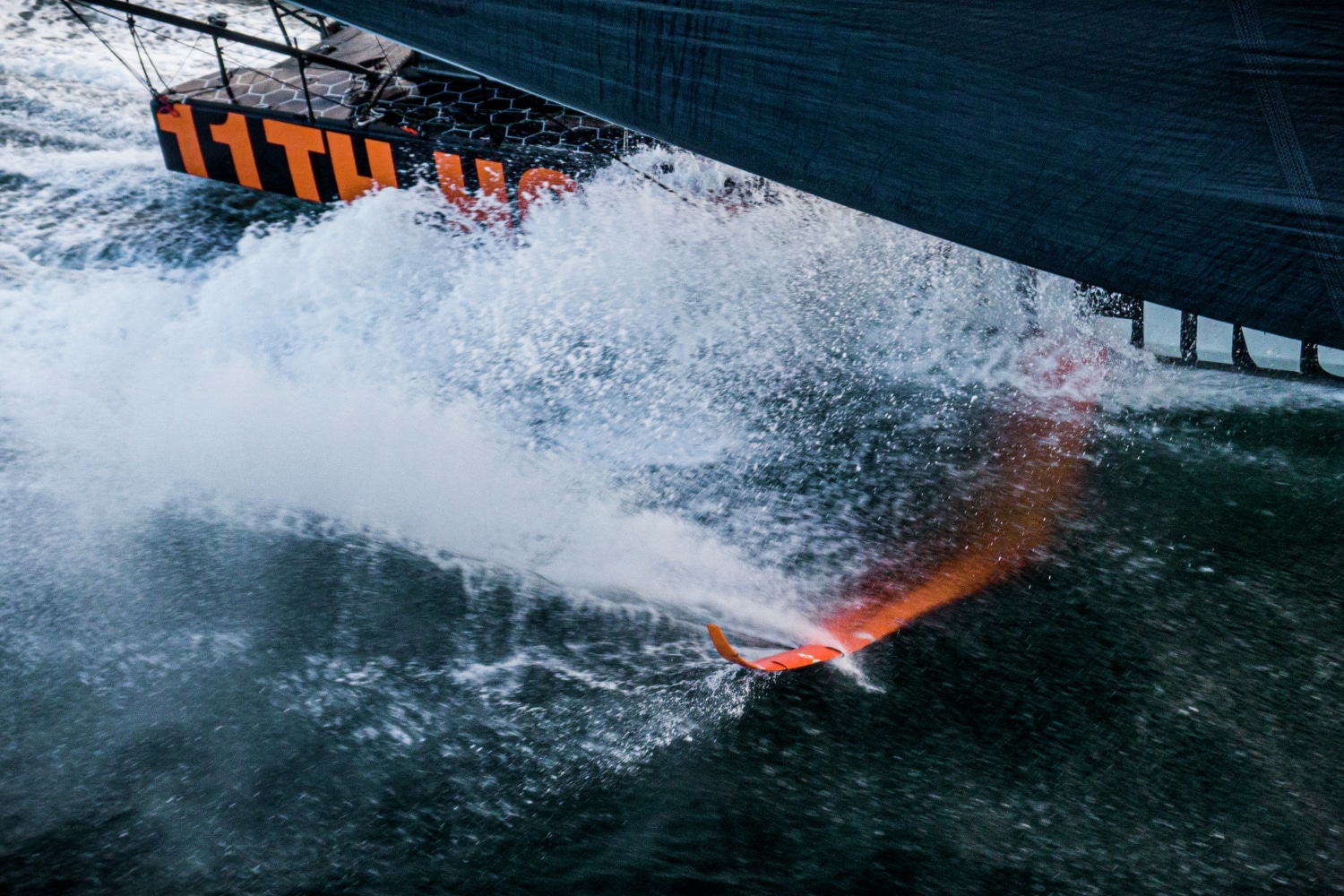 11th Hour Racing Team sailed both Leg 2 and 3 of The Ocean Race Europe with only one foil. Two intense sprints later, we’ve put two podium spots under our belt – pretty decent when you consider we only had half of our foiling capacities to play with.

But what’s actually behind all that? Why does our boat have foils and how did the crew have to adapt to sailing with only one of them?

We sat down with Justin Shaffer, who heads up Special Projects for the Team, to learn more.

The IMOCA 60, the type of boat we are currently using, was developed primarily for the Vendée Globe. This prestigious event is a non-stop, single-handed (meaning: only one sailor on board) race around the world. Quite recently, IMOCA 60s have also made their way to crewed configurations, including next edition of The Ocean Race 2022-23.

The latest development in the IMOCA Class has been the addition of hydrofoils, or wings, that are designed to lift much of the surface of the hull out of the water when sailing at speed. A simple way to think about this is that it’s easier to move through air than it is through water, and so having less of our hull and appendages in the water allows for quicker acceleration, higher average speeds, and peak top speeds unseen previously in the class.

At 11th Hour Racing Team, we have been developing and testing multiple foils on our existing boat, and will continue this process with the launch of our new boat this summer.

How are foils used in sailing?

Many books have been written about aerodynamics. For the curious, a read through the history of Aerodynamics here sheds light on how long dreamers, scientists, and engineers have been working on developing these ideas. Big thinkers like Leonardo da Vinci started researching wings and other nature-made flying devices centuries ago and set the foundation for groundbreaking innovations like airplanes, helicopters or the cutting edge of development of this technology today, flying sailboats.

More specifically looking at the latter, Yachting World has published a concise introduction following the 2013 America’s Cup revolutionary foiling catamarans and our friends at Scuttlebutt have created a great feature including a glossary explaining some important basics and terminology.

Right now, there are two things we need to keep in mind. Firstly, foils can make boats move really fast. Secondly: we are only scratching the surface of this technology.

Justin Shaffer explains:  “The idea of using foils to create lift is nothing new, but the ability to use them effectively offshore is still very much under development. Foils basically work like airplane wings, so when we move through the water and gain speed, they provide progressively more lift. In our world of offshore racing we also have to consider other variables. The interaction between the air, the water and the foil. The hull and foil moving through the waves and the dynamic nature of the loads exerted on all of our structures make this different than building airplanes, or America’s Cup foiling boats that may go faster, but don’t have to deal with the environmental extremes that racing around the world presents.”

What are the best conditions for foiling?

It turns out you can design foils to work in a wide variety of conditions. IMOCA 60 foils start working at 13-14 knots, lifting the hull out of the water as we accelerate through to 18 knots, up to top speeds of 35+ knots. Even in larger sea states, we are regularly averaging over 25 knots now, up from 18-20 in non-foiling IMOCAs, and we’re able to hold these speeds in a wider array of wind angles and conditions.

With America’s Cup and SailGP boats, 50 knots is achievable, and as we continue to experience these speeds and refine our designs, will go even faster. Kite foiling, foiling Moths, wing foiling, all have their different sweet spots and potential speeds, which are a derivative of the design of the foils they use.

On the flip side, with light breezes and when sailing upwind, foils are not necessarily a useful asset for generating speed. Quite the contrary: they create drag, which can slow down the boat. If you were designing a boat for these conditions specifically, it would look quite a bit different from a current generation foiling IMOCA. This has been seen in The Ocean Race Europe, with the non-foiling Offshore Team Germany enjoying the upwind conditions and sailing faster than the four, foiling IMOCA 60s.

Can a boat still be sailed with one foil?

For more experienced sailors this will not come as much of a surprise, but for the author of this article (a newbie to the marine industry): even with one foil, our IMOCA is still able to fly!

“The guys hit 30 knots shortly after leaving Cascais on Leg 2 of The Ocean Race Europe, with that one starboard foil,” explains Justin. “One foil can still lift the boat and the boat can go just as fast – however, in this race it is only possible on this one tack, on the starboard side. On the other tack, they are sailing in a totally different mode.”

So in effect, two boats in one, with unique features on each side – sounds complicated? Well, it certainly is complex. As a matter of fact, the experience of sailing an IMOCA without foils to one with them is very different, particularly at higher wind strengths.

However, when we are looking at the racecourse of The Ocean Race Europe and the weather conditions the crew faced during a major part of the racecourse, the missing foil became less of an issue. With a large portion of the race taking place in the Mediterranean Sea, the fleet faced very light wind conditions with a lot of upwind sailing, juggling thermal breezes switching from land to sea when the day begins, and vice versa at night.

To bring on a strong performance in the Med, it was more crucial to play the shifts and outthink our competition in finding the best of the gradient breeze. In this case, the IMOCAs rely much more on their sails than the hydrofoils to maintain optimum speed.

And what about balance?

Having that one foil on starboard and nothing on port is a strange sight. Also, having extra weight on one side can be an issue. Again, things are less dramatic than they might seem at first glance.

“When sailing IMOCAs, removable water ballast traditionally plays a more important role in generating the righting moment – which is keeping the boat upright and counteracting the side force generated by the sails, allowing us to move forward through the water more efficiently. We also use our canting keel and can change its angle, helping to further generate righting moment as well. With the addition of foils, we can use less water ballast than we did previously. In some sense, in our current configuration with one foil on one side, we have half of an older generation boat, and half of a newer generation boat, and we sail differently on each tack because of this,” commented Justin Shaffer.

To sum it up, The Ocean Race Europe added a great learning experience to our personal logbook of foiling history – we look forward to writing more in the future.