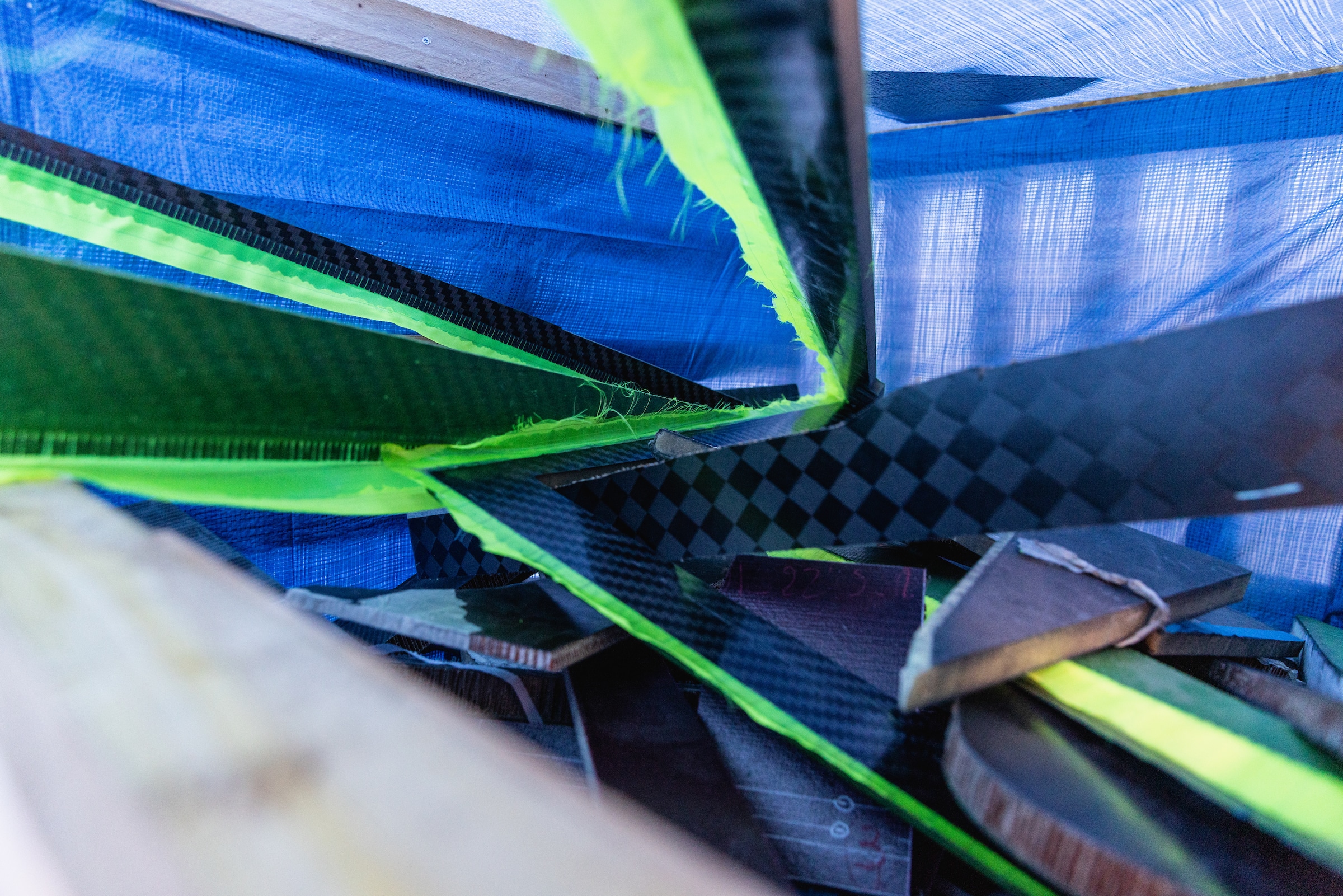 From the sketch on a designer’s notepad to leftover scraps on a boatyard floor, the offcuts of carbon fiber used to construct racing boats are now being given a new lease of life, with more possibilities than ever.

Following the design and build of 11th Hour Racing Team’s 60-foot race boat Mālama, which was the most recent IMOCA to lift the lid on the environmental impact of building a new boat from scratch, the findings revealed that the CO2 footprint of building one offshore boat has increased by two-thirds over the past 10 years to 550 tCO2e [carbon dioxide equivalent], the same as 105 midsize American cars.

80% of these emissions were associated with composite construction. That’s a lot of carbon.

So while designers push the boundaries of innovation (increases in speed, durability and performance being the golden elixir), it has become clear that the need for authentic consideration around the life cycle of the materials made to build these boats has moved from what some may have considered ‘optional’ to ‘non-negotiable’. The introduction of foils into the IMOCA Class alone has seen the footprint of a boat build increase by 18%.

As it stands, the marine industry is producing over 56,000 tons of carbon waste a year and by 2030 this is expected to increase to up to 130,000 tonnes. This jump in production and waste will produce over 3.6 million tons of CO2 – the equivalent to 25,000 transatlantic flights.

This is why our team recently partnered with leading carbon fiber recycling company, Gen 2 Carbon. The partnership will ensure the recovery of our used boat components and manufacturing offcuts to produce recycled carbon fiber (rCF).

As with many of our sustainability initiatives, we have worked closely with the team at IMOCA, ensuring the entire Class can contribute to, and benefit from, this partnership.


“We have over 40 teams in the IMOCA class using carbon fiber on a regular basis. Even if every boatyard optimized its use of carbon, offcuts would still exist and it’s imperative we combine our efforts to decrease the impact of this waste,” explains Claire Vayer, Sustainability Manager for IMOCA.

“The initiative between Gen 2 and 11th Hour Racing Team is an example of how we can come together to solve this problem. As a Class we have a central role in supporting this collaboration and teams’ efforts in their environmental responsibilities.”

Last week, we saw the first tangible steps of the Gen 2 partnership take place. The first 1,500 kilos of what will eventually amount to up to 10 tons of carbon waste from the collective sailing community in Brittany, France, has been diverted from landfill and sent to be processed into recycled carbon fiber (rCF).

The result of this action will be a notable reduction in the environmental impact of build projects by recycling these large amounts of waste and allowing the materials to be recirculated within the sailing community.

With some of the best boat builders in the business working on these boats, the possibilities for inspired rCF creations such as engine boxes, fairings, cradles, molds, navigation tables, and bunks, are endless.

“Recycled carbon fiber is a three-dimensional matrix as opposed to a woven texture which makes it increcibly malleable. We use it within our team for accessory boat parts,” explains Team Boat Builder, Lucien Moore. “Although we’re still in the discovery phase, we’ve found it has lots of potential, particularly with mold-making.

“There are significant cost benefits to using recycled carbon fiber as well. We’ve used it to make the boat’s cradle bunks, which will travel around the world with us and be used every time the boat needs to be hauled out of the water.

“We’re still experimenting and learning about the properties of the material as we go. It’s important to understand how it reacts to the ‘normal’ processes such as wet lamination, vacuum bagging and infusion. Only through trial and error will we know the full benefits.”

In an article published in SAIL Magazine, our Sustainability Officer, Amy Munro, was quoted saying: “Everywhere in professional sport there’s a lot of secrecy between teams, particularly around design and strategy, but one place we can be really collaborative is in the sustainability space.”

This much was certainly true in Lorient last week. With the operation managed by IMOCA and contributions from numerous other teams and Lorient-based manufacturers (even a fork lift voluntarily operated by Team Malizia!) – it became clear that word had got round and everyone was committed to moving in the right direction.

Significant change is required for the marine industry to align with the 2015 Paris Agreement to reduce by 2040 the collective impact by 50%. With collaborations between on-the-water competitors like this in place shoreside, this target could be within sight.