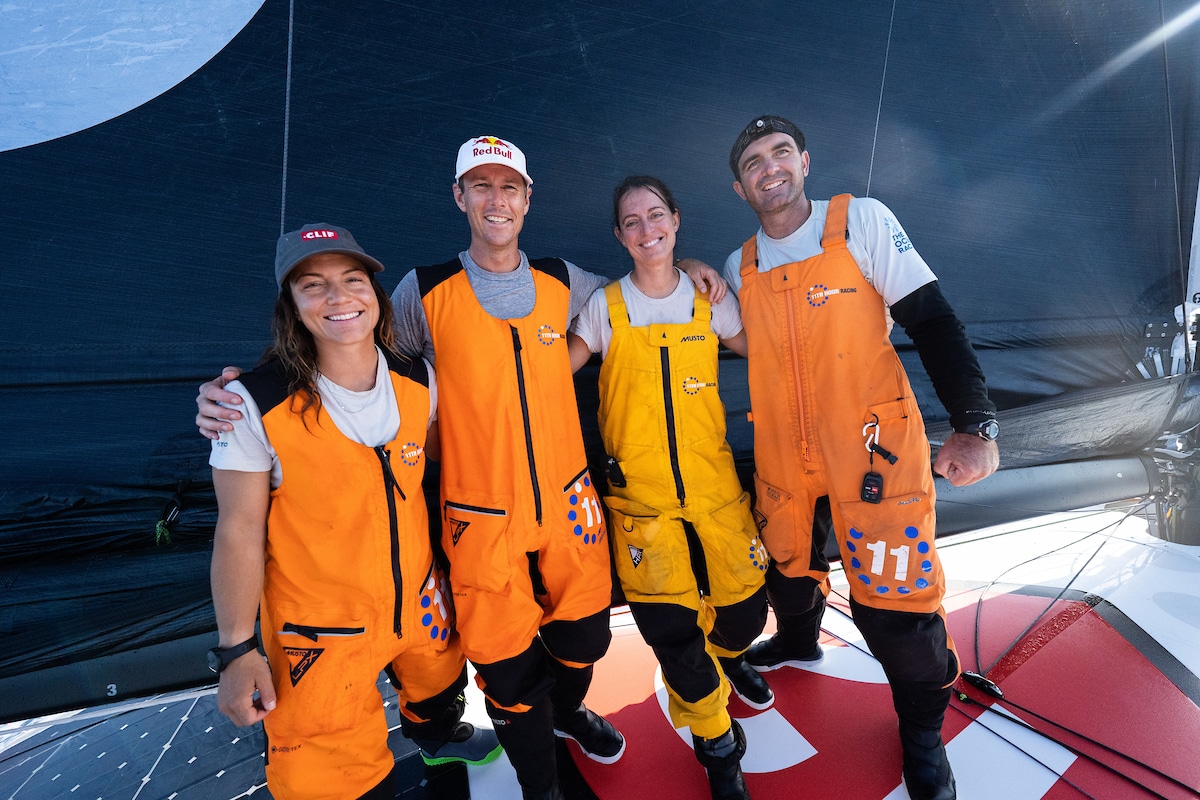 It was a fast and bumpy ride to Bermuda with the crew onboard Mālama racing off the start line to escape the cold front that was chasing them down. Reaching in 20-30 knots of South Westerly wind for almost the entire way on a starboard tack, they sailed through the strong currents of the Gulf Stream, and into the rough and speedy conditions that led them to Bermuda.

“This has been full on,” said Skipper Charlie Enright after crossing the finish line in Bermuda. “There has been no rest for anybody onboard. From the moment we left Newport we have been racing at speeds between 20-30-knots in a heated sea state.

“Before completing this 635-nautical mile race, both Ian and Elena had 24-hours training with us in beautiful conditions back in Newport. They knew the forecast for this race would be very different but I am honestly amazed at how well they have adapted. They both exceeded all expectations in terms of performance, attitude and general contribution to life onboard.

“We have been looking forward to this as it was our first major race of the year,” explained Justine Mettraux from below deck. “As a team we always really enjoy being in race mode because we’re constantly learning, even when it’s rough and uncomfortable conditions like we have had. We’ve only been at sea a day and a half but due to the lack of rest, it feels like much longer.

“Ian and Elena were fantastic, contributing to everything onboard. I’m not sure they slept much or managed to stomach any food but they weren’t sea sick and they were a joy to have onboard.”

Cumulatively, experienced sailors Enright, Mettraux and Ross have well over 200,000+ nautical miles behind them and have experienced most sailing conditions imaginable. However, it was a different story for Walsh and Hight, who between them experienced a different type of adrenaline to what they’re used to in their respective extreme sports.

Backcountry snowboarder, Elena Hight, who had never been overnight on a sailboat before this week commented, “This has been such an amazing experience. Being so far out and experiencing the power of the ocean out there was incredibly humbling. I believe this type of experience, immersed in the full raw beauty of nature, truly connects us to our Earth. I know that this deep connection is what makes us all want to do our part to protect it.

“Taking part in the Newport Bermuda Race has allowed me to have full exposure to what an endurance sport offshore sailing really is – it’s been full on, non-stop action, with very little rest since we left Newport. Even just existing on these boats is quite a task. Moving around, eating, sleeping, all things we naturally take for granted when we’re on land are really challenging. Add that to trying to win a race and it’s full throttle.

“I am most impressed watching this crew take on anything that came their way in these conditions with ease and grace. Despite challenges they worked really well together and kept their calm.

“This race has been relentless but truly an incredible experience. I have the utmost respect for this team and all they are aiming to achieve. It has been a pleasure to be a part of 11th Hour Racing Team.”

Red Bull big wave surfer, Ian Walsh, was enthusiastic about the 635-nautical mile race. “This experience has confirmed what I already thought, which is I have tremendous amounts of respect for this crew and all offshore sailors. The talent of these sailors to be able to read the ocean, the clouds, the wind shifts is inspiring and for me, it’s been a crash course in learning how to sail these highly technical boats.

“I’m in awe of their skills, calm, and professionalism after sailing alongside them for just over a day. I find it amazing that this team will have to race like this for up to 35 days at a time during The Ocean Race. It’s just incredible to have experienced racing like this first-hand.

“Experiencing the power of the ocean in this way is similar to how I feel when your surfing. You get a very intimate understanding of the ocean and it pulls you away from anything else in your life you might be preoccupied with. Whether you’re surfing a big wave or losing sight of land, you have no choice but to be focused on what is right in front of you. It helps you be more present and in the moment without distraction.

Media Crew Member, Amory Ross said: “Intense but great is how I would describe this race. There has been so much to do onboard, it’s been constant.

“Ian and Elena were certainly up to the challenge, it was quite savage conditions coming out of Newport for about a day and a half but they showed progress the whole way. It was impressive to see how interested, engaged and willing to participate they were. It was certainly a shared experience.”

After a quick turnaround, Mālama will sail back to Newport, Rhode Island, where the team is based until the end of July.