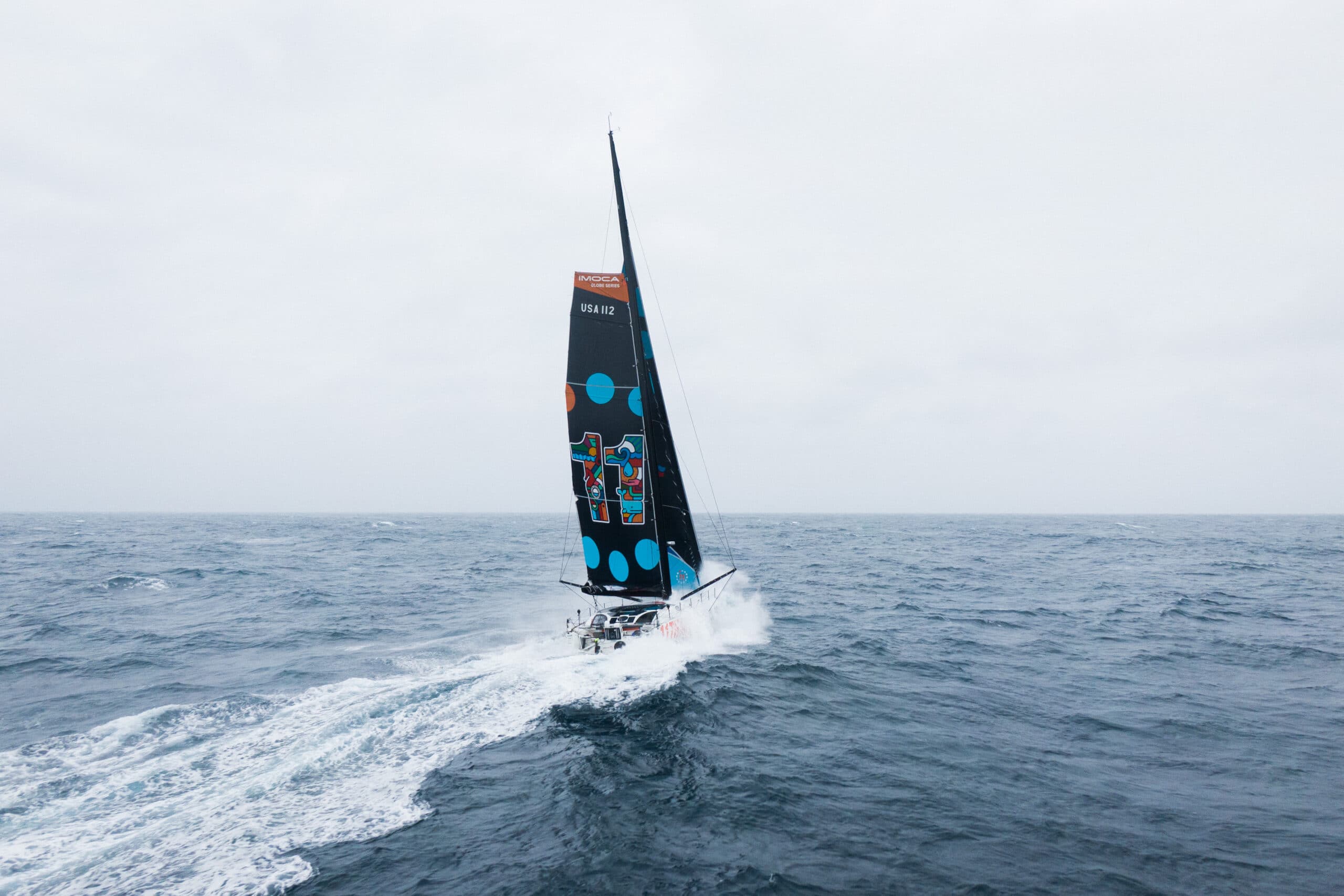 Welcome to the ‘always on’ blog for 11th Hour Racing Team during the 52nd edition of the Newport Bermuda Race. Follow on our social channels for more updates…

11th Hour Racing Team crossed the finish line of the 2022 Newport Bermuda Race after a grueling 41 hours and 28 minutes 43 seconds at sea.

It was a fast and bumpy ride to Bermuda with the crew onboard Mālama racing off the start line to escape the cold front that was chasing them down. Reaching in 20-30 knots of South Westerly wind for almost the entire way on a starboard tack, they sailed through the strong currents of the Gulf Stream, and into the rough and speedy conditions that led them to Bermuda. Read the full article here 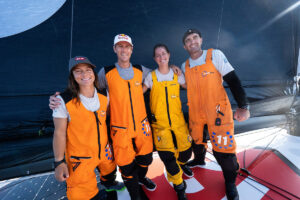 4:10am EDT, June 19
Images from onboard delivered by Amory Ross 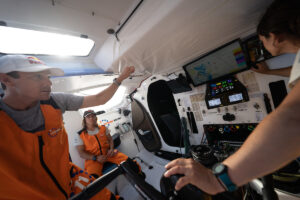 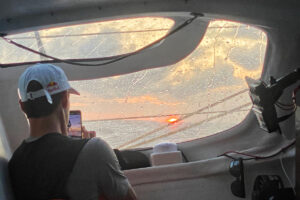 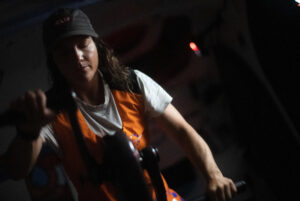 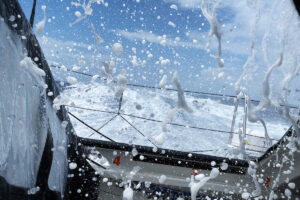 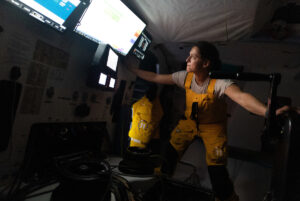 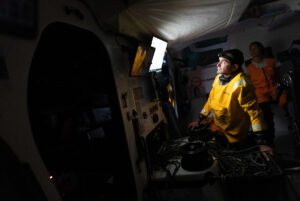 17 hours in to the 52nd edition of the Newport Bermuda Race and Mālama have made good progress overnight and are now exiting the Gulf Stream. Onshore navigator, Simon Fisher, shared his view of the race so far. “Despite the increased risk of squalls in the Stream, the 3 knots of current they have sweeping them east will be reducing their apparent wind so hopefully it’s fairly comfortable onboard.

“It looks like their progress has been slightly slower than the original routing as a result of less wind than forecast and a couple of clouds to tackle. Looking ahead this probably means slightly reduced wind speeds for the team as they head down the track. However, this is not a bad thing. With less wind they are likely to be able to push harder as the foiling Imo doesn’t need much wind to sail fast!”

The tracker this morning shows the team has 431 miles to the finish and are sailing at 22 knots (25mph).

The team on board @11thHourTeam racing in the @BdaRace should be well into the Gulf Stream now, despite the increased risk of squalls the 3 knots of current they have sweeping them east will be reducing there apparent wind so hopefully it’s fairly comfortable on board!

Looking ahead this probably means slightly reduced wind speeds for the team as they head down the track. However this is not a bad thing. With less wind they are likely to be able to push harder as the foiling #imoca60 doesn’t need much wind to sail fast!

6:20am EDT, June 17
“It’s been an aggressive pace knowing every mile counts” – Onboard blog from Amory Ross

All kinds of action out here. Thankful for the early start with the race-deciding cold front breathing down our necks, we made sure to keep things conservative with all of the competitors and spectators on crowded Narragansett Bay! A few seconds later and we were over the starting line and on our way to Bermuda. There were a couple of clearing tacks required to make sure we stayed away from Brenton Reef, and a hitch to the west towards Pt Judith to make ensure we got a got the first good shift before turning south.

Ever since then it has been exactly as expected. 500 miles to go now and the upwind bashing produces a constant cycle of reef in, reef out, reef in, reef out. Ballast in, ballast out, ballast in. J2 to J3 back to J2. Into darkness now and with lighting firing on the bow, we know we’re only in for more of the same through the night. It’s all about changing modes quickly and being ready for the next. And as much as we want to be patient… any lost miles bring us closer to the front currently chasing us down. So it’s been an aggressive pace knowing every mile counts and it’s a relatively short race!

Onboard everybody has been great. Ian and Elena are getting into the routines and learning very quickly. Smiles all around, though they now understand how demanding these boats can be, physically and mentally. They’re no stranger to burning calories, but I think the constant struggle with things like walking and working have given some new perspective to the demands of offshore sailing! 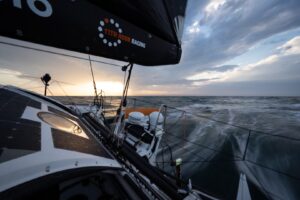 Exactly eight hours after the start of the Newport Bermuda Race and Mālama has 539 nautical miles to go to the finish line in Bermuda. They are currently reaching in 18-20 knots of breeze as they approach a zone with a much stronger SWly with up to 30 knots forecast. It’s likely to be very uncomfortable onboard as the boat heads towards the Gulf Stream, crossing it in the next 4-6 hours. 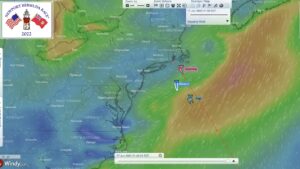 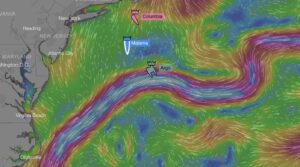 As part of our real time marine mammal observations onboard Mālama, @amoryross has just informed the race organizers (who can then alert the rest of the fleet), that he has spotted a marine mammal on the race course. His message said “Whale sighting here. GPS cords at bottom. Not a Humpback, saw the tail before sounding. Possibly a Minke. Not really Fin whale size”. He’s sent the details direct to Whale and Dolphin Conservation and the Audubon Society of RI.
Yesterday there was a plane spotter survey which identified 7 Fin, 5 Minke, and 1 Sperm whale in the area and the whole fleet were made aware.
Want to know more about how we protect marine mammals while sailing? Read more here. 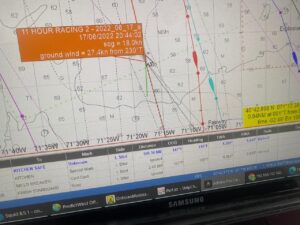 Leaving the dock earlier, Skipper Charlie Enright said: “Growing up in Rhode Island, arguably the home of offshore sailing in the USA, this race celebrates everything that’s great about the sport. There are always huge crowds on Castle Hill to send us on our way and the challenging features like the Gulf Stream really draw sailors in to participate.

“My priority for this race is our crew, the boat and the race in that order. We have a strong team, and I’m really pleased that we have two of the country’s top extreme sports athletes joining us in Elena and Ian.

“For us at 11th Hour Racing Team this event is important as it is our first major race of 2022. It’s a chance for the whole team – shore and sailing – to practice our race build up, preparations and tactics as we keep one eye on the start of The Ocean Race early next year.

“The forecast is looking pretty fruity, and it’s going to be quite different for Ian and Elena compared to the training they’ve done with us so far. I do really look forward to them both experiencing ‘The Ocean View Effect’ as we leave land behind and embrace the vastness and power of the ocean together.

“It will be intense but there will be a great feeling of accomplishment for them both.” 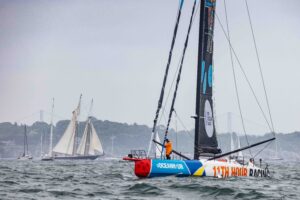 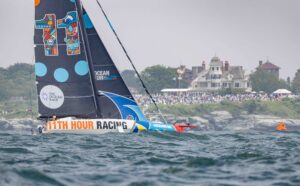 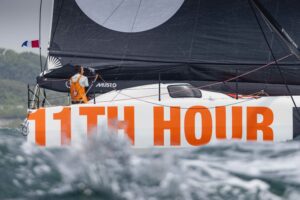 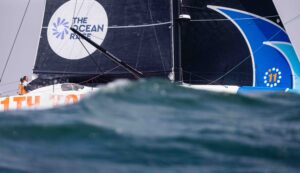 11:30am EDT June 17
Final touches before Mālama leaves the dock

Just making sure we’ve packed all the essentials… 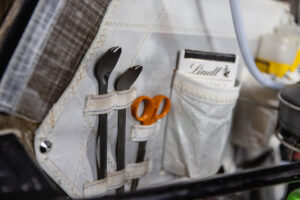 10:30am EDT June 17
“It’s going to be a fast and bumpy ride to Bermuda” – says Navigator Simon Fisher

Although he’s not onboard for this race, 11th Hour Racing Team Navigator Simon Fisher has been working closely with Justine Mettraux on the navigation for the Newport Bermuda Race. With boats speeds that could reach 30 knots and waves as high as 10 feet, it’s going to be a fast and bumpy ride for our crew and special guests…