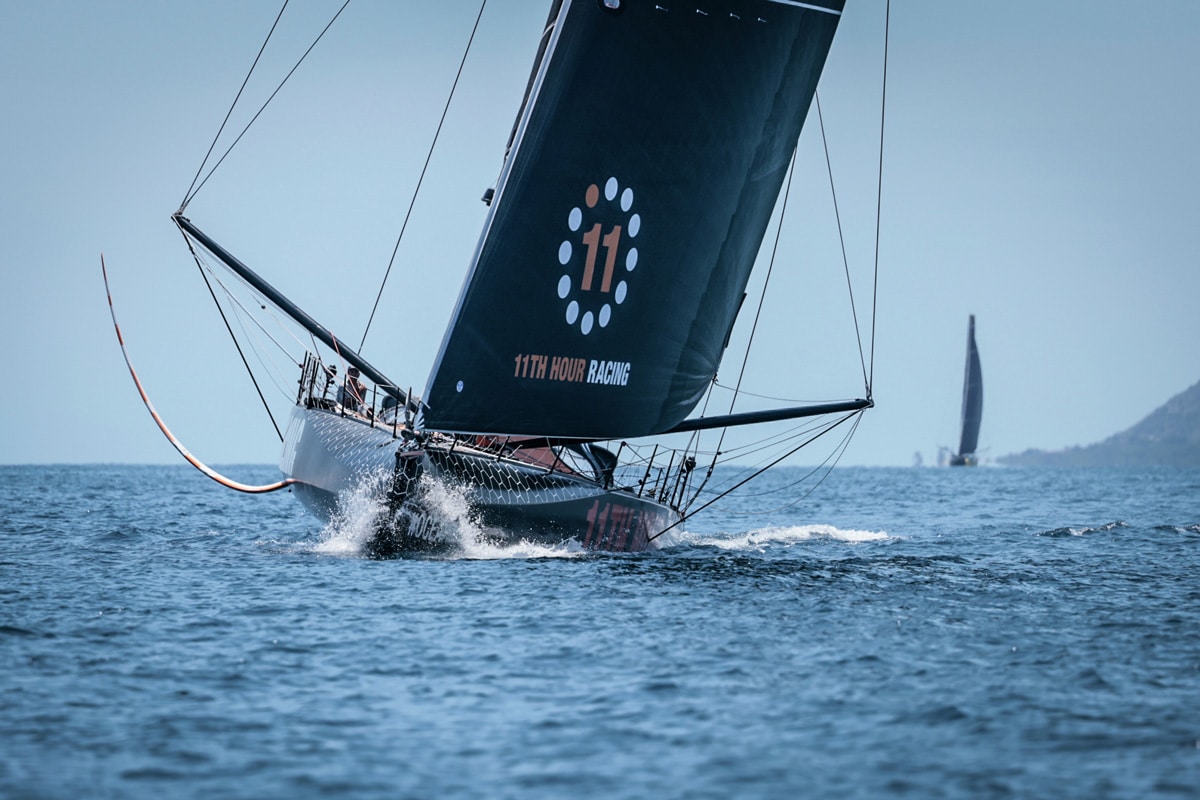 11th Hour Racing Team claw back over 70 nautical miles from the leading boats to land on the podium in third place for The Ocean Race Leg 2 finish.

It was a tense finish to Leg 2 of The Ocean Race Europe with 11th Hour Racing Team clinching the final podium spot after an epic battle from Cascais, Portugal to Alicante, Spain.

The crew left Cascais on Sunday, June 6, three hours behind the IMOCA 60 fleet following an incident two miles after the start, which resulted in damage to the port foil. After returning to dock and removing the foil, we eventually decided to restart the Leg with a 75 nautical mile (86 mile, 138 kilometer) deficit on the rest of the fleet.

Three intense days later, we managed to catch up on the fleet just after crossing the notorious Strait of Gibraltar.

Skipper Charlie Enright, upon arrival on the dock in Alicante having taken third place:

“It takes an amazing team to be able to refocus and accomplish the task at hand. It was a very difficult leg. We didn’t start the way we wanted to, but we rallied around and dug deep. Our result here speaks to the quality of the team we have onboard.”

The 700 nautical mile (1,297 kilometer, 805 mile) sprint had three distinct phases – the first down the Portuguese coast to the narrow gap separating Europe from Africa, the second as the team negotiated the ferocity of the Strait of Gibraltar and the third being the upwind and light-breeze battle through the Mediterranean to the finish line in Alicante.

“It is easy to get psyched up for Gibraltar, you know it is going to be there, you expect 30 to 40 knots, you’ve done it a million times. Although we had the luxury where we could see the other boats’ tracks, we still had to slug it out like everyone else. Coming up the Med, never knowing where the next breeze was going to come from, particularly in the last 24 hours, was tough. But we took our medicine and kept it close to put ourselves in a position to get a podium in the end.”

The final 24 hours through the Mediterranean proved incredibly challenging from a tactical point of view.

“Catching up was one thing but getting past boats was another. The fleet often compressed, but often the first ones in were the first ones out. We made smart decisions, and we picked the right moments to stay close to the fleet when it made sense, but used our modes when we could to get to the next shift. Sometimes it is about taking a loss to fight another day. We did well to do that last night, from a difficult spot, and it meant that  today, for the final run in, we were in a good place, and we could keep fighting back. If someone had offered us a podium at the beginning of the leg, we would have taken it – credit to everyone.”

Despite the nerve-wracking fight trying to catch up with the fleet, we were able to soak up the stunning beauty of the surrounding ocean.

On the occasion of World Oceans Day, media crew member Amory Ross took a moment to express his deep passion for the water they were racing through and the fascinating creatures living below its surface.

While entering the Mediterranean Sea, amidst a pod of dolphins, his tribute to marine wildlife is a personal reminder as to why it’s important to familiarize ourselves with, and protect, the habitats we’re sharing with the marine life.

Going into the final Leg of The Ocean Race Europe, 11th Hour Racing Team is tied on nine points behind LinkedOut and Offshore Team  Germany, and currently lying in third place on countback on best performance in the last Leg.

The crew have three days to rest before the start of Leg 3 on Sunday, June 13 at 1300 CEST – destination: Genoa, Italy.

“We have two tricky scoring opportunities left. The leg to Genoa and the Genoa Coastal Race. Both of which can be light and unpredictable – we will have to keep our wits about us,” concluded Enright.

Check out all the updates from onboard 11th Hour Racing in the Leg 2 in ‘Daily Download’.