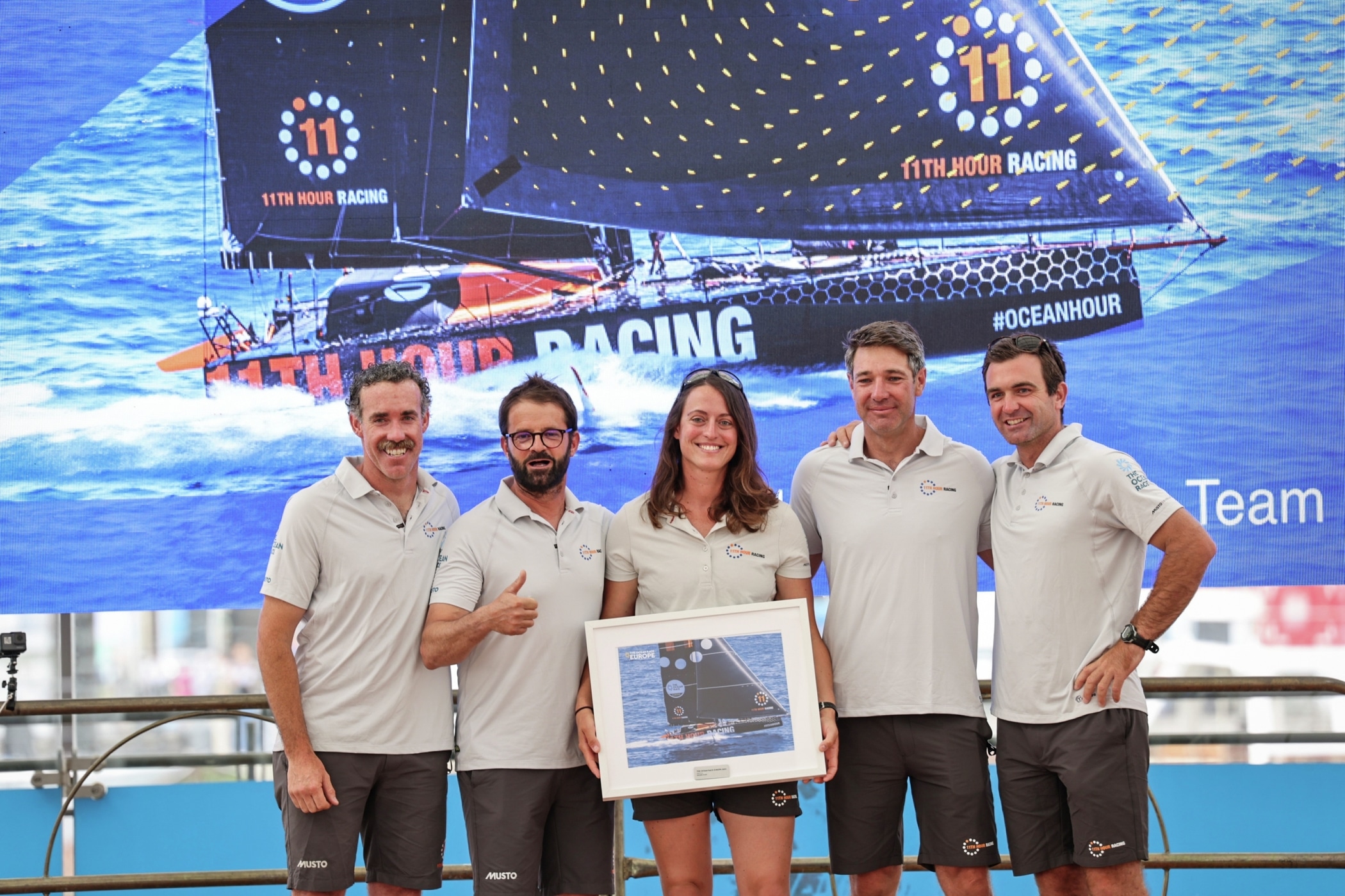 Congratulations, Team! Charlie and the crew put on an amazing show today, finishing first in an intense on-water battle at the Genoa Coastal Race. This victory earned our team the runner-up position at the Inaugural Ocean Race Europe – well done, we are so proud of you!

Exciting is an understatement for the thrilling end to the final on-water battle of The Ocean Race Europe, which wrapped up today in the Italian City of Genoa. Going into the final day trailing the two boats ahead by one point each, winning the coastal race was critical to the overall success of 11th Hour Racing Team.

After a short postponement, the fleet set off in a light, but building south-easterly breeze of 7-10 knots, and our crew sailed its own race right from the start, splitting from Offshore Team Germany and LinkedOut after rounding the first mark. They played a patient game and, when the opportunity came, they pounced. Having led around the first two legs of the course, a boat handling error by Offshore Team Germany on the final downwind leg gave us the opportunity we had been looking for – we went on to sail a perfect final leg and took the win.

Despite crossing the finish line in first place, celebrations were muted onboard and immediately eyes swung behind to the tussle going on for second and third between LinkedOut and Offshore Team Germany. If the Germans took second, they would win overall, but if the French team could ease over the line first, 11th Hour Racing Team would claim the top spot. But in a final push of their non-foiling IMOCA 60, it was the Germans who slipped over the finish line first, just a boat-length in front of LinkedOut, pushing us to second place in the final standings.

“It all came down to the last gybe, those last 10 meters that separated us from a Cinderella story – oh, so close…!” commented Enright. “It’s good to win the coastal race, and I feel it demonstrates a lot about this team, that we kept on fighting until the very end. Despite not taking the overall win of The Ocean Race Europe, I am really proud of what we have accomplished.”

Starting on May 29 in Lorient, France, the event stopped by Cascais, Portugal and Alicante, Spain before arriving at its final port in Genoa, Italy on June 16. In addition to the IMOCA 60 class, there was also a fleet of VO65s competing, which was dominated by Mirpuri Foundation Team (POR), with Sailing Poland (POL) finishing second, and AkzoNobel Racing (NED) in third place.

Combining three offshore legs and two coastal races, The Ocean Race Europe was the first offshore sailing competition in 18-months for our team, following an 18-month hiatus due to the pandemic.

This Ocean Race Europe was a great opportunity to put our crew – Charlie Enright (USA), Justine Mettraux (SUI), Simon Fisher (GBR), Pascal Bidégorry (FRA), and media crew member, Amory Ross (USA) – through their paces on the 2,000 nautical mile (2,300 mile / 3,700 kilometer) course.  From the ferocity of the Atlantic to the light breezes in the Mediterranean, the short hops between stopovers was intense, giving them little time to rest and rejuvenate over the three-week-long race.

Charlie was nostalgic when speaking on the dock in Genoa:

“When we have been able to train together in France, our focus has been around performance and development. The fastest boat usually wins the race and that’s what we have focused on – getting the speed levels up, practicing maneuvers and getting to know this IMOCA 60 by heart. Today was the last day that Pascal and I will sail this boat. As we move on to the new build, we are handing it over to Simon’s and Justine and we all have a very busy season of two-boat racing ahead of us. It’s going to be a busy but fantastic year!”

Set to compete in The Ocean Race 2022-23 in the same, fully-crewed setup, 11th Hour Racing Team is scheduled to compete with two boats at three further races this year:

The Rolex Fastnet Race in August, the Défi Azimut in September, and the Transat Jacques Vabre in November. The new boat – dubbed 11.2 – will be launched at the end of July.