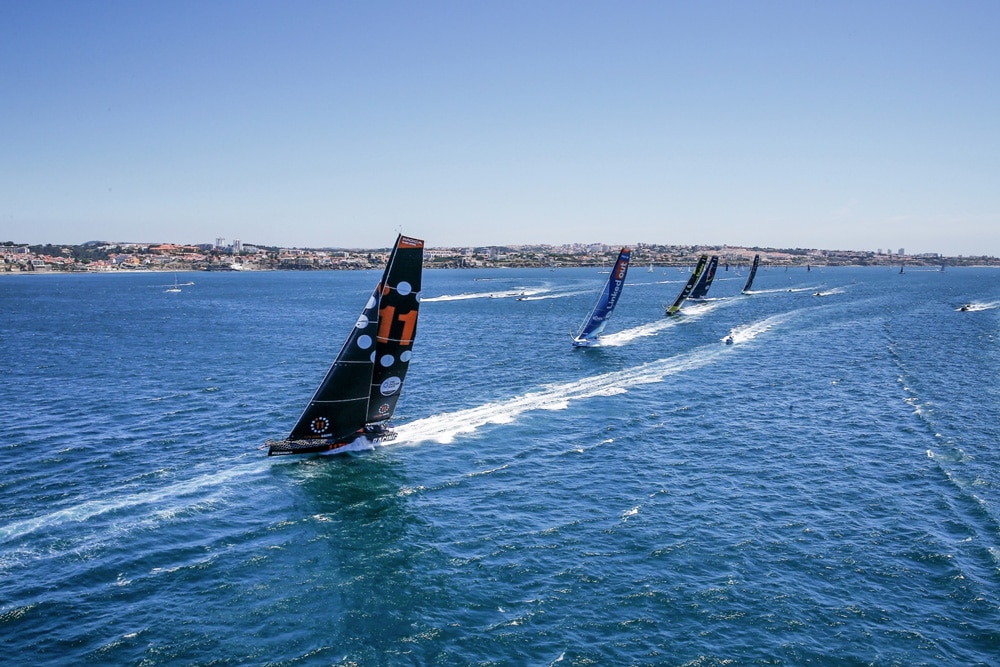 Following an intense start to The Ocean Race Europe with Leg 1, 11th Hour Racing Team is getting ready to take on leg 2 –  sailing our IMOCA 60 through the Strait of Gibraltar into the Mediterranean Sea, and up to the Spanish city of Alicante.

After a few short days recovering from Leg 1’s aftermath in the Portuguese city of Cascais, and the point-scoring coastal dash for the Mirpuri Foundation Trophy race, it’s time to move on to the next episode!

A mashup of challenging conditions, from ‘beast mode,’ wild reaching conditions to calm spells, Leg 1 of The Ocean Race Europe from Lorient, France, to Cascais, Portugal, was definitely a memorable one. After using these past days in Lisbon to catch up on sleep, when not working on the boat or preparing for the upcoming Leg of the event, the team is amped to get racing again. Adding to the excitement, we’re entering the next phase of The Ocean Race Europe ranking first in the overall standings with six points next to our name after claiming second in both Leg 1 and the Cascais Coastal Race.

Starting Sunday, June 6 at 13.45 local time, Leg 2 of The Ocean Race Europe runs from the Portuguese Atlantic Coast to the Mediterranean harbor of Alicante, Spain. Along the way, the two fleets of IMOCA 60s and VO65s will pass through the notoriously tricky Strait of Gibraltar and sail through the waters of the Med, renowned for its fickle weather conditions and swift changes in sea state.

Having put our boat and team setup through a solid test on Leg 1, resulting in a second-place finish after being in the lead for a notable amount of time, the crew is looking to continue its strong performance. Rich in contrast, the Leg 2 route will require many strategic decisions and sharp transitions, maneuvering around tricky headlands and narrow passages, always dealing with changeable breezes.

“It’s not going to be as fast sailing as the last leg, but for sure, it’s going to be exciting and a lot of hard work! Starting in Cascais, we expect a good northerly breeze leading us down the Portuguese coast, promising to put our foils into action nicely and get some high speeds going. Around Cabo St. Vincente, on the southwestern tip of Portugal, things might get more complicated and we’ll have to play with the winds really wisely.

“Then, passing through the Strait of Gibraltar is always a challenge. We will be crossing from a northerly breeze that we’ll meet in the open Atlantic, into easterly upwind conditions, and obviously things will get very narrow. We expect a big acceleration when sailing into Gibraltar, with speeds upwards of 30 knots. It will be critical to manage that well, to stay out of the worst of the weather, and avoid doing anything stupid. The goal is to get the boat out of this tricky area in one piece!”

Once the testing ground of Gibraltar is left behind, the wind is expected to get much lighter, with thermal breezes switching from land to sea when the day begins, and vice versa at night. Sailing through the Mediterranean is a gamble, and it will be critical to find the right breezes while moving along the Spanish coast in upwind conditions.

When the sailors aren’t under the coachroof, there is a good chance they will see a lot of wildlife: Fin whales, pilot whales and orcas are likely to be seen this time of year, along with the bluefin tuna migrating into the Med. After centuries of overfishing, this fascinating species is slowly recovering thanks to precautionary conservation measures and highly restrictive fishing quotas, implemented by the International Commission for the Conservation of Atlantic Tuna (ICCAT). A ray of hope, encouraging us to keep on pushing our mission to turn the tide for ocean health with our sponsor 11th Hour Racing.

As always, Amory Ross will capture the trip through his lens, and send updates from the boat that will be posted here, along with the live tracker.

As SiFi put it: “We’re in for another leg with no rest! I can’t wait to get going!” So, be sure to stay tuned and join us on the adventure of Leg 2 – it’s going to be a busy one…