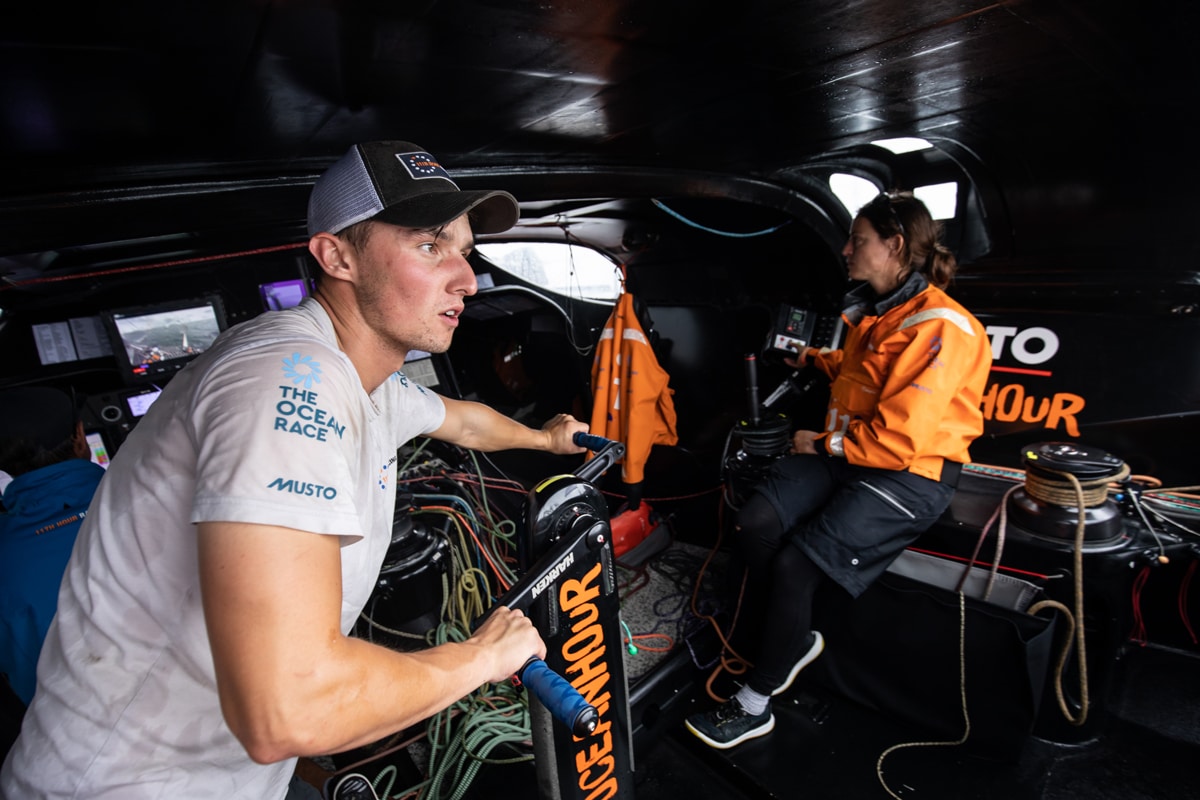 Meet shore team member Fin Clark. Currently onboard Mālama to deliver the boat back to France from Martinique, we caught up with him just before the crew slipped lines in the Caribbean.

Fin has two passions in life – sailing and music (check out his band Broken Strangers). Pursuing a career in sailing ultimately won out when he landed the opportunity of a lifetime to work for Team Brunel in The Ocean Race 2017-18 and he’s been on a roll ever since.

Q: Start off by giving a bit of your background, how did you get into sailing?

Fin Clark: My godparents got me into dinghy sailing through the local Saturday sailing club when I was only seven. I just continued to enjoy it more and more and gradually worked into Laser sailing, B14s and did some double-handed sailing on a J30 cruiser.

I started following the last Volvo Ocean Race (now The Ocean Race) with the Volvo 70s online, and as soon as the first VO 65 race happened (Volvo Ocean Race 2014-15) with Charlie and Mark on Alvimedica I followed each team every single day for the entire nine months. I was super into it and just knew that I really wanted to get involved. I was going to do everything I could to make it happen.

Q: So how did you ultimately break into the pro sailing scene?

FC: It’s a funny story actually. I managed to convince my parents to go with me to the first stopover of the 2017-18 Ocean Race in Lisbon. When I was there I was striking up as many conversations with people that worked for the teams as I could. I even managed to sail in a M32 event after asking David Witt, the Skipper of Scallywag, if I could go out sailing with the team.

On our way home driving through Spain, we were filling up at a petrol station when I struck up a conversation with a guy driving a motorcycle who was wearing a Team Brunel jacket. It turned out that it was Tom Napper who is now the rigger for 11th Hour Racing Team, but at the time was going around the world as shore crew for Team Brunel. We exchanged information and we kept in touch throughout the race around the world.

I eventually asked if I could get involved by volunteering during the Cardiff stopover and he invited me to come work with the team. Napper and the shore team manager Jack Taylor gave me the best chance you could ever imagine, taking me under their wing to give me a start. The whole of Team Brunel were just incredible and I was lucky to finish out the race working with them. It was pretty unreal!

Q: You’ve got some pretty impressive work experience already having only been in the industry for 4 years. Talk more about this.

FC: After the finish of the 17-18 race I ended up doing a delivery onboard Turn the Tide on Plastic to Lisbon where I was introduced to some of the guys in the TP 52 Super Series who were there for an event in Cascais. I was in the boatyard when the propeller fell off Provezza one day, and they asked if I could give them a hand. That’s when I made the connection with the team. Then I got the call a month later to see if I wanted to work with them for the 2019 season. Which again, was such an incredible opportunity.

I followed that up by working with SailGP France during the Cowes event in 2019 for three weeks. And then a year later in 2020, I started working for 11th Hour Racing Team.

Q: You talk a lot about this being your “dream job” why is that?

FC: I just love what The Ocean Race is about – the determination of the people, the adventure side of it, facing the elements as they go around the world, and then the cutting edge of technology. I think working at this level in our sport has always been my absolute goal. We’re around the best of the best in what we do.

On the technical side I really enjoy learning about the boats, improving them, and trying to bring the best performance we possibly can.

Q: You recently celebrated your one year anniversary with the team, a lot has happened in the last 12 months, what are a few highlights?

FC: Finishing the Transat Jacques Vabre. It’s a pretty massive highlight! That’s been the Team’s number one goal. Obviously we wanted to see both of our boats finish, but to finish with Mālama was absolutely awesome.

The final day of The Ocean Race Europe also stands out – seeing the Team do so well in that final race with it being so close. The night before we were stripping the boat out and just went into full ‘inshore mode,’ and to get that result (the Team finished first in the Genoa Coastal Race) at the end of a pretty dramatic event was really cool.

Lastly, the Defí Azimut was really good fun – getting my first taste of the IMOCA scene and the French sailing world with being around all the Ultimes.

Q: Any interest in moving over to the sailing side of things?

FC: For sure, we’re all here because we share a passion for sailing and that’s what has brought everyone on the Team from around the world together. I really enjoy the navigation side and offshore navigating is something I want to progress in. It’s something I am going to have to ask Si Fi (Simon Fisher) and Juju (Justine Mettraux) a lot about as we’re sailing back to France.

Q: You’re getting ready to do the delivery back from Martinique to France, is this the furthest you’ve sailed before? What are you looking forward to the most?

FC: It will be the furthest I’ve sailed and it will be my first transatlantic. I’m pretty excited to be onboard with some legends! Definitely looking forward to seeing different weather, sailing through different climates, and getting that full offshore experience.