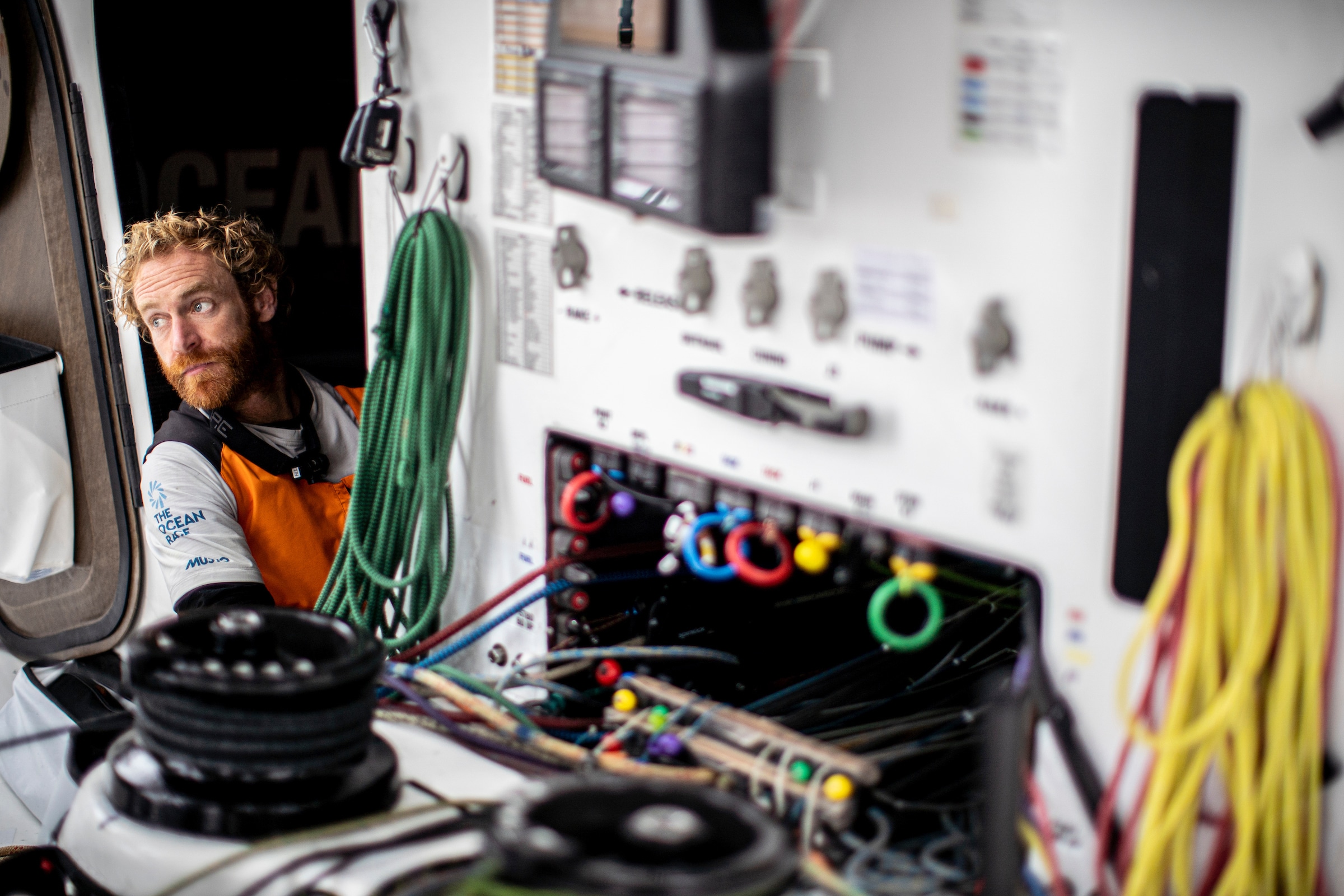 Another look behind the scenes of 11th Hour Racing Team! Cornish-bred shore team member Tom ‘Naps’ Napper is truly a man of many hats: globe trotter, mountain explorer, ripping surfer, sustainability champion, expert rigger, and who knew it? – gifted photographer. We took some time to speak to Tom about his many passions, talents and his role within the Team.

You got into sailing when you were really young. How old were you exactly? Did you like it straight away or were you scared or intimidated first?

Tom Napper: Sailing was sort of my alternative child care. Whenever my mother went to work, she came down to the sailing club to find someone to look after me and I mostly ended up getting chucked into a boat. My mum used to sail a lot when she was younger, less these days. She always had a lot of friends down by the boats and it turned out that would become a family connection.

I was quite hyperactive as a child and my mum said when she took me onboard for the first time, she was shocked to actually see me peaceful and quiet! I simply fell asleep on the fore deck …

I don’t remember getting scared but I got pretty cold a few times! And then, I remember days when we went out on some bigger boats, for example, a 30-foot yacht. I went straight up the fore deck and just loved it up there.

When did you decide that you wanted to make a living out of your passion?

TN: It sort of fell into place really, because I was teaching sailing, which I really enjoyed. And then, bizarrely enough, I taught a group of women to sail in Falmouth and I was supposed to be a female instructor. Obviously, I wasn’t very female, but they were alright with it. They were just fed up with their husbands teaching them and never actually letting them do anything!

We had a cracking week. It turned out all the husbands were former America’s Cup and Volvo (Ocean Race) contenders. At the end of the week, one of my students gave me her husband’s business card and said, “Oh, you should get in touch with him if you ever want to deal with bigger boats.”

That’s how it all started. One day he called me and said, “Come on Tom, let’s go.” He took me all over the world as a rigger, introducing me to loads of people and bigger boats, eventually race boats. Shortly after, some of them phoned me up and asked if I’d like to come racing with them. Bit by bit, it all slipped into place.

In sailing, it’s a lot about being at the right place at the right time and jumping on opportunities right when they come up. I haven’t actually applied for a job since I was 16, word-of-mouth has really been the thing that constantly keeps me busy.

Having spent so much time on boats and offshore, you must have some crazy stories to tell! Was there ever a situation when you got really scared and thought – if I survive this, my great-grandchildren will still talk about it?

TN: (Laughing) Oh yes, there have definitely been a few situations!

I distinctly remember once, when I was 18, desperately holding on to the boom of a boat. It was in the middle of the night in the Med, the weather was terrible. I was putting ropes around the sails, when someone released the mainsheet while we were reefing, the boom unlocked and it swung open, taking me with it.

There I was, my legs dangling above the black sea below, holding on for dear life. I was just thinking, “Crikey, you better cling onto that boom otherwise you’ll find yourself swimming around in the middle of the ocean, hoping to get saved by two other people that you don’t really trust!” Wasn’t much fun, I can tell you that …

Luckily, I never went overboard though.

At 11th Hour Racing Team, you are the rigger. Can you explain to me a little what exactly you are doing day-to-day? What do you like most about your job?

TN: I am looking after the mast and all the standing rigging that holds the mast up. It’s a really critical part of the job when getting a boat prepped for racing. If anything happens to the rig the race is over and it can even get dangerous. In competitive racing, material like ropes needs to be top-notch since we push the boats and crew so hard. It can be catastrophic if something breaks.

When looking after the ropes, and materials in general, it’s important to find the right balance between replacing parts before they break and avoiding unnecessary waste whenever possible.  I’ve always been conscious about this, trying to repair what can be fixed and repurpose what can’t.

If a rope breaks it doesn’t mean they can’t be of use elsewhere. I systematically collect ropes to put aside and bring them back to Cornwall, on older boats they can have a second life that will last a decade or more!

Do you think there is a general increase in awareness for environmental issues and circularity in the sailing world?

TN: It’s improving, but it’s definitely not growing in the industry as a whole as much as we need to, especially when you look at the super yacht racing world where there is a lot of wastage, unfortunately.

The environmental impact of our sport has been on my mind for years. When I was approached by 11th Hour Racing Team, I was really excited to join a group of people who also care about this issue and are trying to do something to make things better.

Besides that, what has been the highlight of your time with the Team so far?

That would be sailing on Mālama. The project came together really nicely and it was great to be able to head offshore, feel the boat, see how it’s performing. The boat feels so different, definitely a new generation of race yachts. Just getting out there on the ocean with her was amazing.

The Ocean Race 2022-23 is starting next January in Alicante, Spain. What do you look most forward to?

TN: Just being able to travel the world with your mates, which is, essentially, what the Team has become.

Between each leg you have a chunk of time off to relax or do whatever you want. Last time, when I did The Ocean Race with Team Brunel, my girlfriend at the time and I bought an around-the-world ticket and saw incredible places, especially in Asia. Vietnam is one of those places I’d love to get back to at some point. We rented dirt bikes back then which took us to the most unbelievable places, tiny villages in the mountains with the friendliest people. And then there is the food… absolutely stunning.

With the Team, we are currently based in Concarneau, France which is a very quiet place. Even though I like it and it reminds me a lot of home, but a less crowded version, I really look forward to a nice dynamic when traveling with the race. In between the stops, I’d sure love to have a few good surfs or go snowboarding!

You are currently working more behind the scenes, but have been a professional racer as well. Do you have any ambitions to build out this part of your career in the future?

TN: Interesting question, I would probably say yes! I’ve raced with bigger crews in the past, doing events like the America’s Cup when it was in Bermuda, and I actually won a World Championship in 2017 in Newport on a J-Class boat called ‘Lionheart’. We won the first World Championship ever in this class of boats that are in fact the original America’s Cup boats from the 1930s and has had a big revival in recent years [more information about the boat and the event here].

I nearly had three very close opportunities to sail in the last Ocean Race. And, I’ll be honest, I was pretty gutted that I missed out! It came down to paperwork that didn’t come through in time. It’s a bit of a shame, with crew sizes being further reduced, that was probably one of the last real opportunities to get into it as things have become much more competitive over the past few years with smaller crews onboard. Having said that, I’d really be happy to jump onboard if the opportunity came up!

Single-handed sailing has never appealed to me, but I’d be stoked to give double-handed racing a go if somebody offered it to me.

You actually have a degree in photographic communication. Are you still taking a lot of photos as a hobby or even professionally?

TN: Yeah, I do. I have less time at the moment, but I try to take a little portable 35mm camera around with me wherever I go. The bulk of what I shoot are things like tack strops, reef details, etc. I also document stuff for myself as well, when I’m off on an adventure, like the Mongol Rally that I did a few years ago.

I have also been kayaking on the Danube and done some great trips skiing… These are the occasions when I really love taking photographs, documenting the great outdoors.

I also love to shoot people, so I can remember everyone I met on my travels.