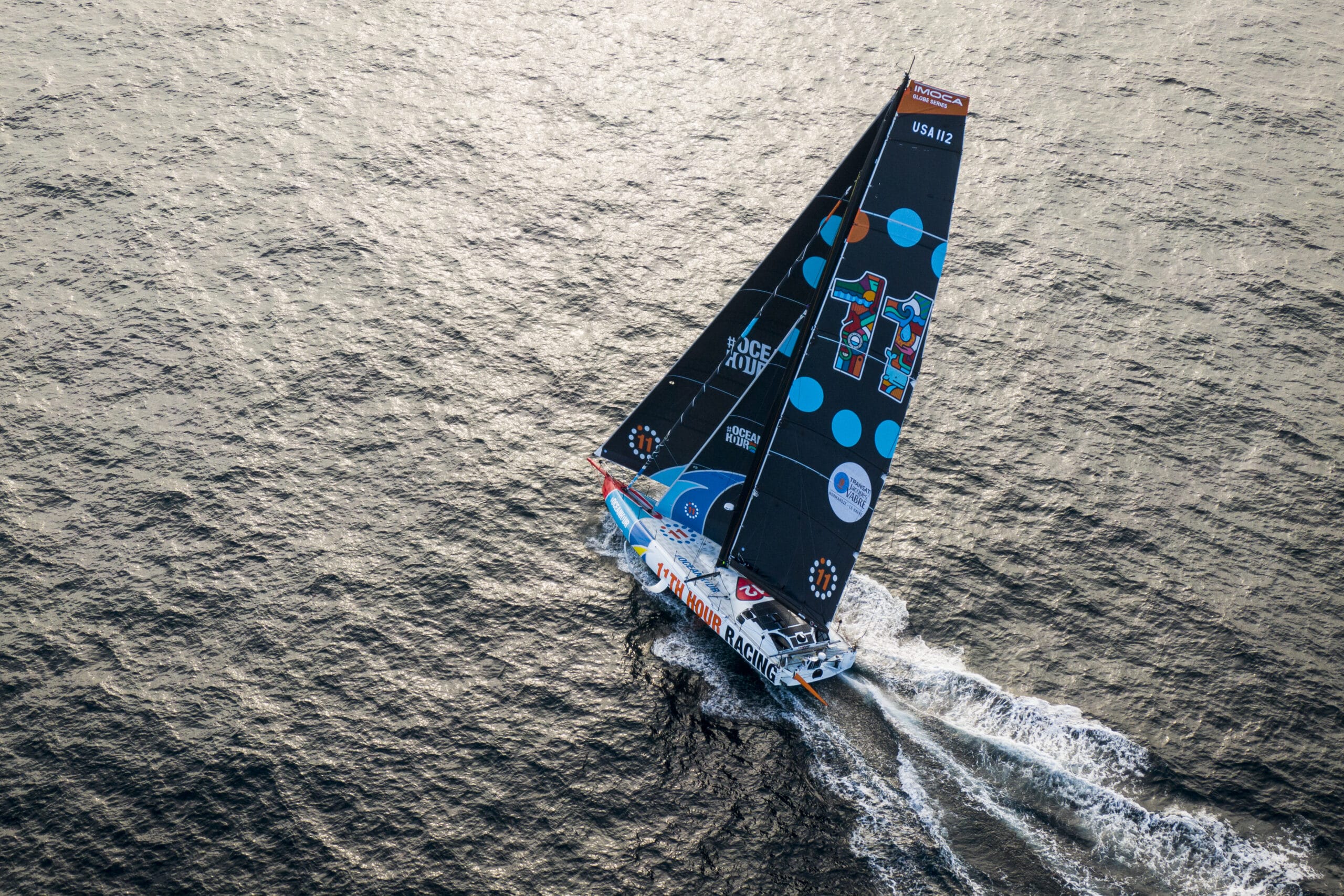 11th Hour Racing Team skipper Charlie Enright resumes an incredible year of sailing and shares some insights to what’s next for the crew.

Sitting here at home in Rhode Island and as we head into the holiday season, I’ve been looking back on all that has been done by the team and I’m incredibly proud of what we have achieved. 2021 was an insanely busy year for 11th Hour Racing Team.

For the first time in over 20 years an IMOCA team campaigned two boats at the same time. Add to that, the fact that one of our two IMOCAs was brand new and you quickly understand why everyone on the team – from the technical to the shore team – have been so flat out!

We started the year with quarantines and training as we prepared for the first-ever Ocean Race Europe – a race many thought might not happen due to COVID-19. In the end, five IMOCAs and five VO65s were on the startline in Lorient and there was tight racing between all the IMOCA entries, albeit in mostly light, Mediterranean conditions. It was an event of highs and lows, but it eventually came down to the last ten meters of the Genoa in-port finale. We ended up taking home a hard-fought 2nd place while learning a ton about how to sail these boats in this new Ocean Race crewed environment – valuable lessons we plan to build onto when we start our training next spring.

From June onwards, the focus returned to shorthanded sailing. Alaka’i (aka ‘11.1’) transitioned from crewed mode into double-handed mode as Si Fi [Simon Fisher] and JuJu [Justine Mettraux] took the reins. They did their first training as a double-handed crew on the way back from Genoa to Concarneau, post-Ocean Race Europe, and it paid dividends immediately. They finished 3rd in The Rolex Fastnet Race and 2nd in The Défi Azimut, taking them to the top of the IMOCA Globe Series leaderboard: a fantastic debut we are all incredibly proud of. All this while Pascal and I waited to get our hands on the soon-to-launch new boat, Mālama (aka ‘11.2’).

After some intense weeks finalizing the boat, where our whole shore and technical team pushed their capacities to the very limit, Mālama launched in August, less than three months before the start of the Transat Jacques Vabre. We used August, September, and October to log as many days on the water as we could, which was not always easy. Sometimes the weather and wind didn’t cooperate, and of course, we also experienced the to-be-expected ‘new boat teething issues’. At the end of the day, we still managed to log around 1,500 nautical miles before the start of the transatlantic in Le Havre.

As I looked around the invited guests at our two-boat naming ceremony in September, the magnitude of our operation – up to that point still more a dream than a reality – started to become clear. We were surrounded by the very best faces and talents in offshore sailing, all coming together behind a vision inspired by our sponsor 11th Hour Racing. Not only to be designing and building the very first IMOCA for fully-crewed racing, but also to be re-imagining that approach, meticulously measuring, reviewing, assessing and challenging some long-standing practices and processes. If I tell you that the footprint of a new IMOCA build has almost doubled in ten years in the endless search for performance, it makes it clear that we must come together to make change within our industry. I am very proud that we have gathered the very best people to help drive that change to make a real difference to the way that we build our boats in the future.

When the entire team arrived in Le Havre for the start of the Transat Jacques Vabre, it was a great feeling – four sailors, two boats, one team.

We didn’t have the Transat Jacques Vabre results that we were hoping for. Alaka’i broke their mast off of A Coruña and had to pull out of the race after only four days at sea. Mālama suffered keel damage on day 13 making it a considerable challenge to cross the finish line in Martinique. Still, we have learned an enormous amount about this boat and are more ready for The Ocean Race now than we were even just one month ago.

It’s taken a ton of hard work to operate the way we have over the course of this tremulous year, frequently disrupted by changing regulations, amendments to event schedules, and the constant supply chain issues.

However, we’ve managed to navigate through the odds and obstacles, wrapping up 2021 with a fantastic boat full of potential and a great team driven by passion and always going the extra mile to make things happen.

2022 will start fast for the team, with the publication of our Design & Build Report, a three month winter refit for Mālama, before we head out sailing again in the early Spring.

We’d like to thank all of those who’ve had a hand in making it possible to be where we are now. We’re in a strong position moving forward and can’t wait to get back on the water in what will be a new and exciting 2022.

We look forward to sharing all the moments along the way with you.

Many thanks and Happy New Year!